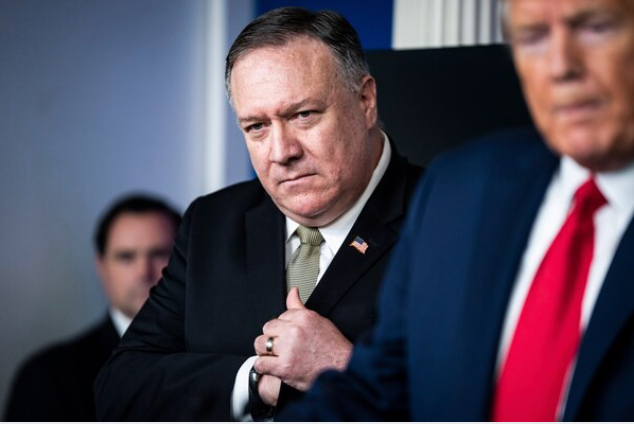 Secretary of State Mike Pompeo speaks with President Trump and with members of the coronavirus task force on April 8, 2020. MUST CREDIT: Washington Post photo by Jabin Botsford.

WASHINGTON - In the growing series of President Donald Trump's controversial removals of inspectors general, the firing of State Department IG Steve Linick might be the most problematic. Linick, we've come to find out, had been investigating Attorney General Mike Pompeo personally, as well as a major decision Pompeo had approved on an arms deal with Saudi Arabia. And both the White House and Pompeo have said the removal of Linick was Pompeo's call.

On Monday, Pompeo's office made the case for why Linick deserved to be removed. But, at least at this point, it's pretty thin gruel.

As The Washington Post's John Hudson and Carol Morello report, Pompeo and his office are spotlighting two key issues with Linick: that he didn't mesh with the State Department's goals, and that there were leaks involving his investigations.

Here's the crux of the case they made for Linick's removal:

"Pompeo told The Washington Post that he advised Trump to fire Linick because he was not 'performing a function' that was 'additive for the State Department.'

"One of Pompeo's top aides, Brian Bulatao, said concern over Linick had grown because of a 'pattern of unauthorized disclosures, or leaks,' to the news media about investigations that were in their early stages. Bulatao said officials had no evidence Linick was personally responsible for the leaks but believed that they could taint the outcome of ongoing probes.

"Bulatao also said the secretary was frustrated with Linick's indifference to an 'ethos statement' Pompeo formulated for employees last year that includes mottos such as 'I am a champion of American diplomacy.'"

Let's take the leaks first. The story highlighted is from the Daily Beast, which reported in September that Linick was investigating the State Department's special envoy to Iran, Brian Hook, who is close to White House senior adviser and Trump's son-in-law, Jared Kushner. The investigation involved alleged retaliation against an aide for her Iranian American ethnicity and perceived political bias. (The story came shortly after Linick had similarly released a report that alleged harassment and retaliation against other State Department employees who were perceived as disloyal to Trump.)

The Daily Beast cited as its source "two government sources involved in carrying out the investigation."

While acknowledging no evidence to link Linick to the leaks, Bulutao says: "You know the IG is normally charged with carrying out the investigation. It certainly was a very strong finger-pointing at IG Linick's way."

Firing someone based upon suspicion and inference, though, isn't generally a satisfactory reason. What's more, it's not clear what Linick might have had to gain by leaking this, even if he had. The report naming Hook did indeed come out several weeks later.

At least if that were true, though, it might hold some water. As for the other allegation against Linick - that he wasn't performing an "additive" function and that he didn't sufficiently subscribe to Pompeo's "ethos statement" - that's even more puzzling.

An inspector general is tasked with independent oversight of their department and questioning the powerful. Their adherence to the slogans of the department leaders - in this case, Pompeo's "I am a champion of American diplomacy" - wouldn't seem to be one of their chief concerns. Indeed, you could argue that it would be counterproductive for an IG to align with their department leaders' respective slogans as if they are there to promote the leaders' defined agenda and vision for the department that they are supposed to be holding to account.

The other thing about IGs is that their "additive" function is, by definition, to root out wrongdoing and problems within the department. Linick has, by all accounts, produced a series of very serious reports alleging problems within the State Department. His willingness to investigate Pompeo personally is also a rather bold move by an inspector general and suggests he was hardly a wallflower declining to carry out his defined duties.

Whether any of those investigations was warranted, of course, is a valid question. Maybe the argument could be that Linick's actions were frivolous, wrongly concluded or politically motivated. That's what Trump has suggested about other IGs he's removed, including intelligence community inspector general Michael Atkinson (whose firing Trump made clear was tied to Atkinson forwarding the whistleblower complaint that led to Trump's impeachment) and acting Health and Human Services inspector general Christi Grimm (whose report alleging "severe shortages" of hospital equipment during the coronavirus outbreak Trump cited).

But that's not even the argument that Pompeo and his office are making. Perhaps that's because they recognize saying that would only reinforce the apparent retaliatory nature of the firing, as Trump's comments have. But saying this was about leaks that Linick hasn't even been connected to and about Linick's lack of adherence to Pompeo's messaging doesn't exactly suggest a strong basis for firing.

And when you overlay that on what Linick had investigated - Pompeo, the arms deal Pompeo signed off on, a Kushner ally and a well-connected GOP donor named Robert Pence (no relation to the vice president) - it should only raise more questions about how all this went down.