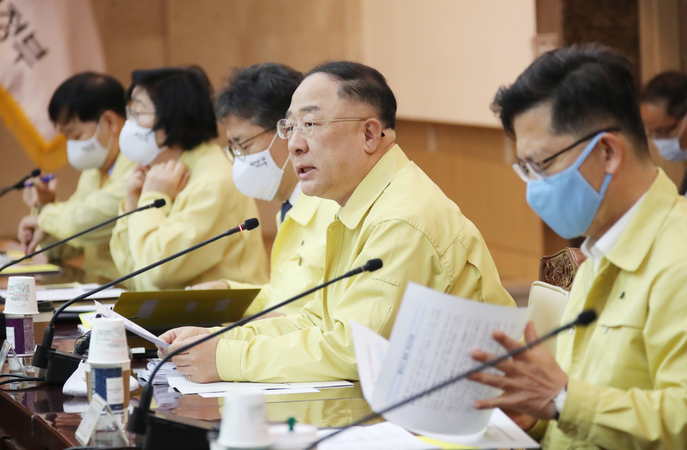 SEJONG -- South Korea will step up efforts for an economic recovery after the coronavirus pandemic as the nation is returning to normal activities, Finance Minister Hong Nam-ki said Wednesday.

Hong made the remarks at a meeting with economy-related ministers as schools reopened for high school seniors, about 80 days later than the original semester start day of March 2.

Unlike other nations, South Korea has not enforced lockdown measures to combat the virus. Instead, the nation implemented strict social distancing guidelines, along with mass testing.

Hong said the government will boost measures to help the nation's economy recover more swiftly from the pandemic than other nations.

Last week, the government said it aims to create 1.56 million jobs in the public sector, as the nation's economy has suffered its sharpest job losses in 21 years over the pandemic.

About 1 million jobs in the public sector have not been opened due to social distancing rules, but the government will soon open such jobs by easing some rules.

The government will also encourage public firms to create some 550,000 jobs for young people.

A third extra budget will be announced early next month to minimize the economic fallout from the pandemic.

To help stabilize corporate bond markets, the government and the Bank of Korea will set up a special purpose vehicle to buy commercial papers from companies with low credit ratings, Hong said.

The 10 trillion won vehicle will run for six months and it could be expanded to 20 trillion won, depending on market situations, Hong said.

South Korea has promised relief packages worth some 240 trillion won to ease the economic fallout from the virus.

The nation's economy shrank 1.4 percent on-quarter in the first quarter of the year, marking the sharpest quarterly contraction since the last three months of 2008.

South Korea has pledged to set up a fund worth 40 trillion won to provide financial support to key industries disrupted by the pandemic. Hard-hit key industries include aviation, oil refinery, shipping, shipbuilding and car production, the backbone of the country's employment.

Vice Finance Minister Kim Yong-beom told reporters that the government will require companies to return some profits to the nation if their business returns to normal after receiving the funds.

When the funds are provided to companies, they will be banned from giving dividends and purchasing their own shares, Kim said. (Yonhap)