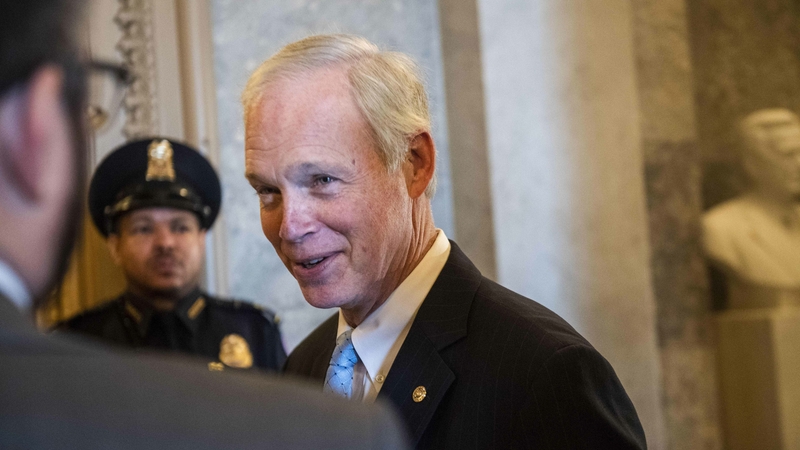 Senator Ron Johnson, R-Wis., speaks to the press in January 2020. MUST CREDIT: Photo for The Washington Post by Amanda Voisard

The Homeland Security and Governmental Affairs Committee approved the subpoena on a party-line vote, more than two months after its chairman, Sen. Ron Johnson, R-Wis., indicated that he planned to seek the documents concerning Hunter Biden's work for the Ukrainian energy company Burisma.

Johnson's quest has generated fierce objection from Democrats, who argue that the inquiry is simply an election-year witch hunt meant to sling mud at President Donald Trump's likely November opponent. Some, including the committee's top Democrat, have suggested that Johnson is serving as an unwitting pawn in a Russian disinformation campaign.

Sen. Gary Peters (Mich.), the ranking Democrat on the committee, said Wednesday that the panel is "going down a dangerous road" at a time of a national crisis from the coronavirus pandemic.

"At this moment when Americans need us to work together, this extremely partisan investigation is pulling us apart," he said.

The subpoena comes as Republicans have increased their efforts to investigate the administration of former president Barack Obama - a campaign that they say is meant to uncover malfeasance in targeting Donald Trump when he was a candidate and president-elect for unwarranted investigation. Democrats say it is simply another front in a Republican effort to rough up Biden ahead of the election.

Sen. Lindsey Graham, R-S.C., is seeking a list of Obama administration officials who may have sought to reveal the names of Trump-connected figures in anonymized foreign intelligence dragnets - an effort that could advance a narrative that the former president and his allies conspired to inappropriately target Trump, one that Trump has dubbed "Obamagate."

But experts say that veiled names in intelligence materials are routinely "unmasked" by government officials who are seeking to understand the context of what they are reviewing, and that unmasking itself is not evidence of wrongdoing.

Trump has urged Republicans to pursue the investigations targeting the Obama administration and vowed earlier this year to make Hunter Biden's work in Ukraine a "major issue" in the general election.

The Democratic-led House impeached Trump in December after an inquiry focused in part on the allegation that Trump tried to leverage a White House meeting and military aid to pressure Ukrainian officials to investigate the Bidens. The Republican-run Senate acquitted Trump on the two charges - abuse of power and obstruction of Congress - in February.

Andrew Bates, a spokesman for the Biden campaign, called Johnson's effort misguided amid the deadly outbreak.

"We're in the middle of the worst public health and economic crisis in a century, and what is Senator Johnson focused on? Running a political errand for Donald Trump by wasting Homeland Security Committee time and resources attempting to resurrect a craven, previously debunked smear against Vice President Biden," Bates said in a statement.

Johnson's subpoena targets documents and testimony in the custody of Blue Star Strategies, a lobbying firm that acted on behalf of Burisma and employed Andrii Telizhenko, a Ukrainian national linked to the energy company. Burisma employed Hunter Biden as a board member, paying him hundreds of thousands of dollars for a sinecure that he has acknowledged was the result, at least in part, of his father's famous name.

At the time Hunter Biden served on Burisma's board, his father was acting on behalf of the Obama administration to combat corruption in Ukraine. But no evidence has emerged to suggest that Joe Biden acted in that capacity to benefit his son.

Fact-checkers have debunked Trump's attacks related to Hunter Biden's work in Ukraine, and some Trump administration officials testified under oath during the impeachment inquiry that Joe Biden did not do anything wrong.

Johnson has pursued the subpoena since early March, but Democratic objections and the spread of the coronavirus delayed his efforts to push it through the Homeland Security and Governmental Affairs panel, which has broad investigative jurisdiction. Democrats, in addition to objecting to the partisan nature of the inquiry, have suggested that any information sourced from Telizhenko could be suspect and called on Johnson to schedule "defensive briefings" with intelligence officials to prevent the committee from disseminating potentially false information planted by Russian intelligence services.

In a letter to the panel Wednesday, Blue Star said there was no reason a subpoena would be necessary: "At no time have we ever stated or indicated in any way that we would not cooperate. Therefore, we are puzzled, despite our willingness to cooperate, why the Committee is proceeding to vote on a subpoena."

Johnson said Wednesday that he disputed that claim and moved forward with the subpoena. He indicated earlier this year that he plans to issue a report about Hunter Biden's involvement with Burisma and Ukrainian matters before the election.

A spokesman for Johnson said that Blue Star delayed the panel's efforts for more than five months and that the firm responded only when the committee announced that it would hold a meeting to vote on the subpoena.

"It appears the subpoena is just for show, a way to create the false impression of wrongdoing," he said. "It's like in a third-world dictatorship, a show trial with no basis in fact, with no due process, with no reality."

Democrats on the panel sent a letter to Johnson on Tuesday demanding that he focus the committee's attention on the coronavirus pandemic - not on the Bidens.

"Our committee has a responsibility to ask tough questions on the pandemic response and get answers for the American people at a time when they are most in need," they wrote, requesting information from various federal officials, including the heads of the Federal Emergency Management Agency and the Centers for Disease Control and Prevention.