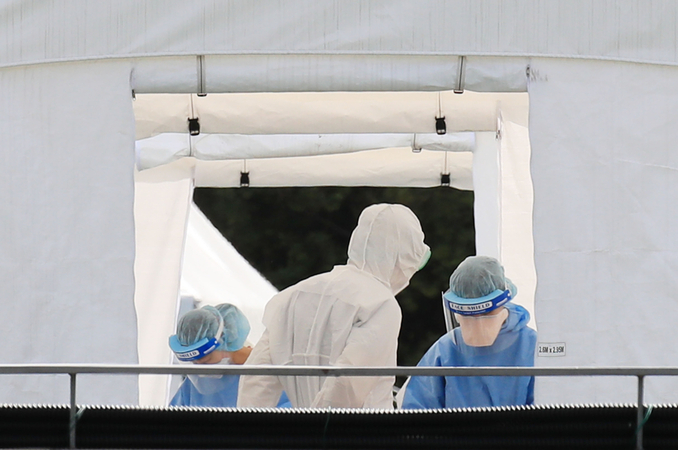 The new cases raised South Korea's total caseload to 11,142, and the nation's death toll remained unchanged at 264, according to the Korea Centers for Disease Control and Prevention (KCDC).

Itaewon has emerged as a hotbed for infections as a 29-year-old man tested positive for COVID-19 on May 6 following his visits to multiple clubs and bars in Itaewon. At least 207 infections here have been connected to the case.

To avoid a second wave of infections, South Korea has been carrying out more than 77,000 tests on those who visited affected clubs between April 24 and May 6.

The number of imported cases rose by nine from a day earlier, reaching 1,200. More than 88 percent of such patients were South Korean nationals returning from overseas.

Authorities said the country is expected to experience a gradual increase in the number of imported cases, as it is inevitable for South Korea to maintain at least limited exchanges with other countries.

The fatality rate came to 2.37 percent. South Korea has not yet reported any deaths from patients aged 29 and younger.

It has also not yet seen a coronavirus-related syndrome among children as observed overseas.

The total number of people released from quarantine after full recoveries stood at 10,162, up 27 from the previous day. The latest figures indicate that more than 90 percent of confirmed patients have fully recovered from the virus.

The health authorities say they remain vigilant over sporadic group infections across the nation, though they say it is safe to deem the club-linked cases as now being under control.

"The cases from Itaewon did not lead to a massive proliferation of the virus, but we are still experiencing local infections in the Seoul metropolitan area," Vice Health Minister Kim Gang-lip said during a daily briefing, hinting that karaoke rooms, PC cafes and bars are still among places vulnerable to the virus.

Exactly how they became infected with the COVID-19 virus was not immediately known, but authorities say they have not found connections to the clubgoers.

Dozens of high schools in Gyeonggi Province that surrounds Seoul ordered students to return home on Wednesday. Two high school students tested positive for COVID-19 in Incheon, in what could be infections tied to Itaewon.

Another vocational school, in Daegu, once the epicenter of the COVID-19 pandemic in South Korea, also closed down on Thursday after a student in a dormitory tested positive.

South Korea, which normally starts the new school year in March, allowed high school seniors to return to classrooms on Wednesday, with a goal of having students of other grades gradually resume normal routines by early June.

Health authorities said they are currently working to draw up new guidelines for students, as the upcoming summer heat is anticipated to make it more difficult for them to wear masks at all times.

"The COVID-19 pandemic can never be eradicated unless there's a vaccine," Kim added. "We will continue to experience sporadic infections in different corners of our daily lives."