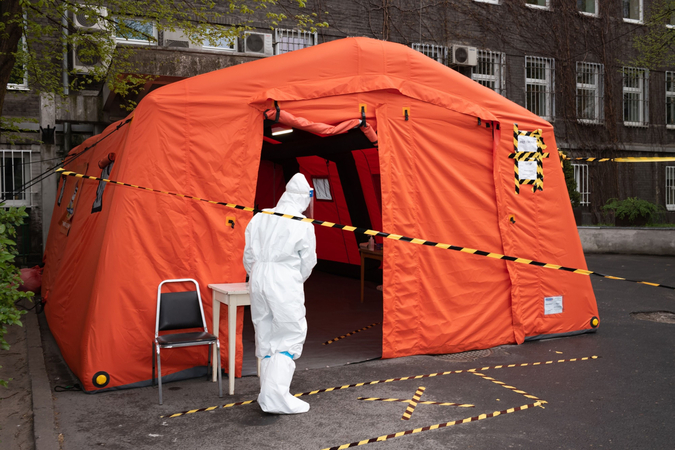 A medical worker stands beside a tent set up for visitor temperature checks outside the Czerniakowski Hospital in Warsaw, Poland, on April 29. 2020. MUST CREDIT: Bloomberg photo by Agata Grzybowska.

Poland is targeting local banks and largely bypassing foreign investors in its unprecedented efforts to raise funds for virus relief.

In the past two months, quasi-sovereigns issued 80 billion zloty ($19.3 billion) in state-guaranteed bonds -- more than twice the amount sold by the government at regular auctions this year.

The quasi-sovereigns don't give detailed data on who purchased their bonds, apart from saying that local banks have been the biggest buyers. Domestic mutual funds haven't been active as they continue to struggle with outflows during the ongoing economic and market unrest. Foreign buyers don't even appear to be a regarded as a target buyer.

"PFR doesn't even have a term sheet in English, while BGK bonds are only available if you go through a Polish bank, which makes things a bit tricky," said Andreas Rein, a portfolio manager at Uniqa Capital Markets in Vienna. "We bought some BGK bonds on Thursday, but the procedure for foreign buyers could be more open."

While liquidity in the new instruments is low, both quasi-sovereign issuers are eligible for the Polish central bank's bond-buying program, which so far bought 20.8 billion zloty of PFR and BGK debt. As a bond-buyer of last resort, the central bank can potentially provide an exit ramp for investors if sentiment changes.

Still, the additional yield on PFR's notes over government bonds isn't a bonanza, according to Bartosz Pawlowski, chief investment officer at MBank SA in Warsaw.

"We're talking government bond yield, plus banking tax, plus the premium for low market liquidity," Pawlowski said. "It's not exactly the eighth wonder of the world."