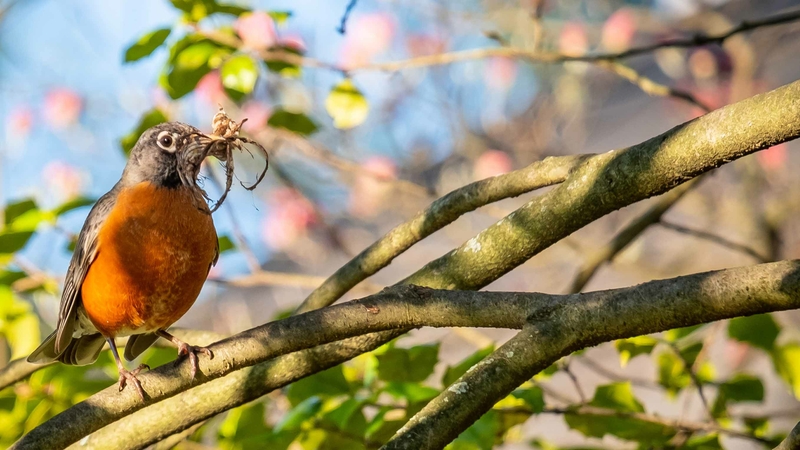 A robin is among the regular visitors to Washington Post columnist John Kelly's backyard. Watching birds is a way to take one's mind off the pandemic shutdowns. MUST CREDIT: Washington Post photo by John Kelly.

In a strange new world where the volume was suddenly turned down - empty sidewalks, less traffic and fewer early-morning leaf blowers - people stuck in their homes are tuning their ears to a sweet natural sound they've long taken for granted: bird songs.

Across the country, scientists who study birds say they're besieged by family members and friends asking the same question: Is the bird population exploding?

"I'm hearing from a lot of people saying, wow, there are so many birds," said T. Scott Sillett, a wildlife biologist who heads the Smithsonian's Migratory Bird Center, which runs the national Neighborhood Nestwatch - a kind of bird census conducted by volunteers. Sillett shakes his head.

"For one, we're hearing more birds because there's less human noise, fewer tires humming and horns," he said. "We're less conspicuous in our houses, and the birds are coming down to see. People are saying, wow, this bird is nesting right here under my window."

The bird was probably there all along.

"There's a surge in interest in birdwatching right now," said Mike Parr, president of the American Bird Conservancy. "People are in their houses and running out of Netflix and Zoom meetings and wondering what to do and they're realizing there are birds in their backyards."

The scientists, or bird nerds as they're called, say it would take more than a year of research before they could answer whether more robins, meadowlarks, blue jays, orioles, cardinals and sparrows are out because people are in. But they're sure about one thing: More people are paying attention.

Each year, the Cornell Lab of Ornithology holds an annual Global Big Day of birdwatching, which happened this year on May 9. The organizers didn't notice an unusual increase in birds, but the number of people participating in the event rose to 50,000, a 45% increase from the year before, said Ian Davies, a project leader for eBird, the online portal that runs the event.

The birds they sighted and checked on a list grew 40% because there were so many pairs of staring eyes. "Not only was it up that Saturday, but over the past six weeks, participation has been up about 50%, our largest growth," Davies said. "People are just turning to birds. They're looking out their windows and getting fascinated by them."

John Fitzgerald, executive director of the Cornell Lab, says he knows one reason people think there are more birds than before: It's spring. Birds are flocking back from South America and the southern United States to mark territories and mate.

Both actions involve a ton of singing. Cardinals, blue jays and robins are tweeting boundaries to territories they've staked out. They're also tweeting for love, acting on hard-wired impulses to get busy, lay eggs and fly south with a new generation of birds before winter.

The irony is that scientists say bird populations have been declining over the past few decades. A study in September showed that nearly 3 billion birds have been lost in North America since 1970, a 29% drop in the United States and Canada.

Fewer sparrows and finches are visiting bird feeders every year, the study said. And the flutelike song of the western meadowlark is fading to silence. With such a reduction in bird totals, it would take a major drop in noise pollution to better hear those that remain, experts said.

One scientist is trying to determine if the coronavirus pandemic quarantines are having an impact on bird behavior and populations. Olivia Sanderfoot, a National Science Foundation graduate researcher at the University of Washington, launched a study that will observe bird feeders while monitoring air quality and noise pollution in the Pacific Northwest.

When the study launched on April 1, "I thought we would be able to get a few family and friends or maybe 30 volunteers," Sanderfoot said. She now has 860.

"Yes, I do think the quarantine has to do with the number of volunteers. I don't think we would have gotten this support if this were a typical spring," Sanderfoot said. She called it "a very powerful data set for ecology. I could not go to 800-plus locations across the Pacific Northwest every week."

For the study, birdwatchers have to commit to standing at one predetermined station for 10 minutes to record all the birds they see or hear. The information they collect is logged into eBird and reviewed.

The plan is to build a model of bird habitats in Washington, Oregon and Northern California and record their behaviors during a period of improved air quality and fewer cars on roads.

"I will only be able to better understand how social distancing impacted birds once we have 2021 data," Sanderfoot said.

"One thing that's especially true in urban and high-density [areas], greatly reduced human traffic leaves more acoustic space out there," Fitzgerald said. "Birds do respond negatively to a lot of human noise, according to acoustic studies. It's quite reasonable to imagine birds are using more of that space with people in their houses. City parks are usually overrun with human beings, and now species are stopping to check them out and use them."

In some cases, the newfound freedom is to their detriment. On the Gulf Coast crescent that extends from Brownsville, Texas, to Naples, Florida, migrating shorebirds and seabirds have nested in areas that human beachgoers would occupy were it not for the pandemic. Now, people are returning, and those nests could be threatened.

"Generally, when the covid shutdown began and all the beaches closed, that was right at the beginning of the breeding season of the shorebirds and seabirds we work with," said Kacy Ray, the gulf program manager for the American Bird Conservancy. "They were just beginning to nest and pair."

Last year, there were more than 430 pairs of nesting birds on a section of a beach in Galveston, Texas. Dozens of groups that protect birds, including state and county government organizations, rushed to fence off those areas, but they could only protect a few.

Kristen Vale, the Texas coastal program manager for the conservancy, said she watched as a piping plover, a shorebird, hovered over a nest that was suddenly overrun by people.

"I'm almost certain that bird abandoned its nest because there was so much recreation," Vale said. "Another plover nested in an area where they hadn't before, where cars could park, and the bird is still defending its nest. It's incredibly disturbed."

That bird is spending a lot of time off its nest, which could slow the development of its eggs, if they survive. Grackles and other predators, such as gulls, eat eggs at nests when parents are away for long periods.

If a person is at the beach and a bird is hovering, squawking like crazy, it's probably trying to protect a nest with eggs, Vale said. Stay away from dunes where birds tend to nest.

"A lot of these birds are camouflaged and are hard to see with the naked eye," she said. "They're above the high-tide line. We strongly encourage people to keep dogs on leashes because dogs eat eggs and they eat the adults."