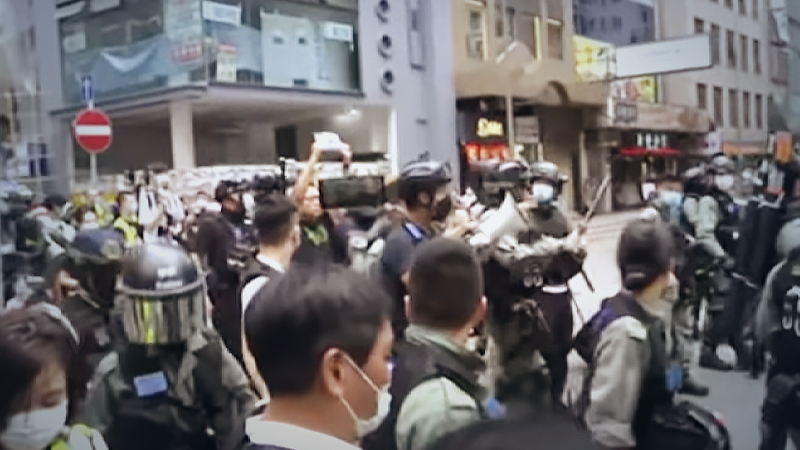 HONG KONG - Police fired multiple rounds of tear gas and used a water cannon to disperse protesters and later arrested over a hundred opposing Beijing's plan to unilaterally impose a sweeping national security law, marking a return to the demonstrations that defined this city last year.

Despite social distancing measures still in place over the coronavirus outbreak that bar gatherings of more than eight, as well as existing laws on illegal assembly, tens of thousands thronged by early afternoon through Hong Kong's Causeway Bay shopping district. Calls to assembly were made online, without a formal organizer or permit.

Refrains of last year's protests - "fight for freedom," "stand with Hong Kong" - echoed on the streets among people of all ages, along with some newer ones: "Hong Kong independence, the only way out." Some carried posters declaring that "Heaven will destroy the Chinese Communist Party."

"If we don't come out today to fight back, this may be the last time," said Chris, a 19-year old protester who gave only his first name as he had already been arrested once before for participating in an illegal protest. "Maybe tomorrow, Hong Kong will be China and we can't even say a single word of criticism on the internet without being arrested."

Some activists gathered near the starting point of the planned march under the auspices of a "health talk," claiming they were exempt from restrictions on public gathering, but were arrested nonetheless for unauthorized assembly.

Soon, the protest descended into familiar scenes: bottles thrown at police, rounds of tear gas fired in response, games of cat and mouse between protesters and officers, and eventually arrests. By 4:30 p.m., police said they had arrested at least 120, mostly on charges of unlawful assembly.

The sweeping national security law will criminalize "foreign interference" along with secessionist activities and subversion of state power. The law imposes Beijing's will by decree and completely bypasses the legislative processes set up in Hong Kong by the 1997 handover from Britain.

The move undermines Hong Kong's constitution, the Basic Law, and essentially discards the "one country, two systems" approach meant to preserve the city's autonomy until at least 2047.

On Friday, Secretary of State Mike Pompeo denounced the law, calling it "a death knell" for Hong Kong's autonomy and said it could trigger sanctions and change the U.S. relationship with the territory.

In Beijing, Chinese Foreign Minister Wang Yi said Sunday that the national security legislation for Hong Kong was "urgent and imperative" because of the protests that erupted last year.

"These protests had posed a grave threat to Hong Kong's prosperity and stability, and to the practice of 'One Country, Two Systems,' " Wang said at his annual press conference, on the sidelines of the National People's Congress.

He added that establishing a new legal system and enforcement mechanisms were "a pressing priority" that "must get it done without the slightest delay."

But he characterized the new laws as narrowly defined.

"This has no impact on Hong Kong's high degree of autonomy, the rights and freedoms of Hong Kong residents, or the legitimate rights and interests of foreign investors in Hong Kong," he said.

Just 20 minutes after the designated start time of the march, protesters had spilled onto the roads, snarling traffic in scenes reminiscent of the months of sometimes violent unrest last year.

Police moved quickly to disperse them, firing several rounds of tear gas into the crowd, leaving the elderly coughing and choking and parents rushing to get their children into malls for safety as the shutters closed on them.

At one point police fired a water cannon mounted on an armored truck at protesters and then into the air.

Even after most of the activists scattered, police remained on the streets of downtown, with some people shouting "communist thugs" at them.

In some cases protesters attempted to build makeshift barricades in the streets to hinder police movement - a hallmark of last year's protest - but they failed to hold back police for long. A heavy riot police presence blocked off dozens of roads and fortified subway stations, in a show of force across the heart of the city.

In a statement, police said the demonstrators were "causing serious obstruction to the road traffic" and so it used "minimum necessary force" to disperse them.

"Police do not condone the unlawful and violent acts of rioters and warn against all disruptions that endanger public safety and breach the public peace," a second statement added.

The scenes mark the beginning of what will likely be a long and restive summer in Hong Kong, as thousands pledge to never give up the fight against Beijing's control, despite the increasingly powerless situation they find themselves in.

Most Hong Kong protesters say they simply want to continue living with the freedoms they have always enjoyed rather than being subsumed into mainland China.

The turmoil erupted last year with the introduction of a bill that allowed extraditions to mainland China. The protests grew into a whole political movement pushing back against Beijing's encroachment on the city's political freedoms.

Under the 1997 agreement, Hong Kong administers its own affairs - save defense and foreign relations - and has become a thriving center for finance and media.

"I'm worried about my future, but it is pointless to think of that now," said one protester who gave only her last name, Fong, for fear of arrest. "I know we have no power against Beijing, but we still have to stand up, and say to the world that this is bad for Hong Kong."