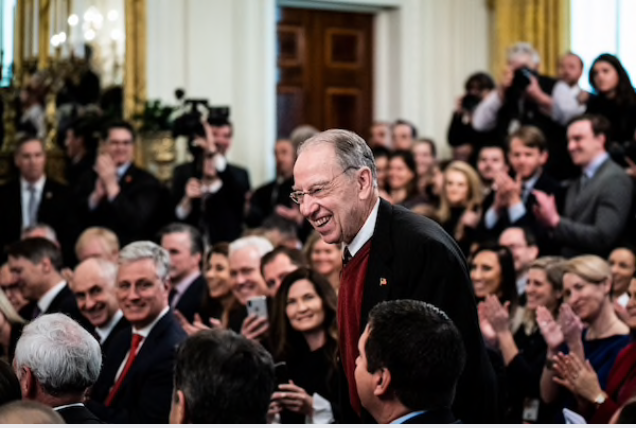 The 665-word letter had gone, as expected, unanswered. So Sen. Charles Grassley fired off an email to the White House Counsel's Office, pressing for an explanation as to why President Donald Trump abruptly dismissed an inspector general who had played a key role in the Ukraine scandal that led to Trump's impeachment.

Pat Cipollone called Grassley, R-Iowa, directly, promising he would get a response to the senator quickly on the controversial firing of Michael Atkinson, the intelligence community watchdog who had alerted lawmakers to a whistleblower's complaint about Trump pressuring Ukraine to investigate his political rival.

The two would speak again last week, with the White House lawyer promising an answer to Grassley by Tuesday that would detail the reasons for firing Atkinson and another inspector general who had recently been ousted by Trump.

Grassley is facing the stiffest challenge of his nearly four-decade Senate career to his self-appointed role as a champion of inspectors general: a president from his own party who has made clear that he has no use for internal government watchdogs and no hesitation to get rid of those he considers disloyal.

Grassley says he resents Democrats questioning his dedication to protecting these government officials. But so far amid Trump's rapid-fire dismissals of the watchdogs, he has refrained from taking aggressive action beyond sending carefully worded letters that don't appear to have had much, if any, impact on Trump's attitude or actions toward inspectors general.

The 86-year-old Grassley is coming under criticism that on protecting government watchdogs in the Trump era, he's all bark and no bite.

In a virtual roundtable in Wisconsin last week, former vice president Joe Biden, the presumptive Democratic presidential nominee, argued that Republicans had abandoned their long-standing defense of inspectors general and singled out Grassley.

Grassley's response is that he is precisely the same man Biden knew when both men served in the Senate.

"Unfortunately, a lot of Democrats question my record on this issue, and you've been seeing here in the last couple of weeks," Grassley said in an interview with The Washington Post last week. "They do that when it's politically convenient, and I quite honestly resent that."

Grassley continued: "They ought to have the same attitude toward oversight, whether you have a Republican or Democrat president."

Still, the scrutiny is undoubtedly increasing on Grassley, as Trump takes unprecedented steps to remove watchdogs who have played significant roles in administration controversies or on the suggestion of his closest advisers. The president recently indicated he would terminate Steve Linick, the State Department's inspector general who had started to investigate alleged misconduct on the part of Secretary of State Mike Pompeo, one of his most influential Cabinet officials. Pompeo had advised Trump to dismiss Linick.

In addition to Linick and Atkinson, Trump has moved to replace Christi Grimm, the principal deputy inspector general for the Department of Health and Human Services who has run the office since January, by nominating a permanent inspector general for HHS. Grimm's office released a report on acute shortages of testing and personal protective gear amid the coronavirus pandemic, and she is scheduled to testify before the House on Tuesday.

Trump also removed Glenn Fine, who had been the acting inspector general for the Pentagon and was to chair a federal panel overseeing the Trump administration's management of the massive $2 trillion coronavirus rescue package passed by Congress in March. And Mitch Behm was removed on May 15 as acting Transportation Department inspector general, though he will remain with the office.

A 1978 law created the modern-day inspector general, and Grassley was elected to the Senate two years later. The dozens of inspectors general across the administration conduct oversight of federal agencies, and although they are technically political appointees, their independence has long been prized.

Grassley, two other Republican senators - Mitt Romney of Utah and Susan Collins of Maine - and a few Democratic senators sought details about the reason for the Atkinson dismissal, noting that a 2008 law requires a president to give lawmakers a written explanation for removing any inspectors general. On his own, Grassley earlier last week sent Trump a similar letter on Linick, noting that lost confidence alone was not a sufficient explanation.

The action, Grassley said, mirrors the approach he and a bipartisan group of senators took in 2009 when President Barack Obama summarily dismissed Gerald Walpin, the inspector general of the Corporation for National and Community Service, which operates the AmeriCorps program, without giving Congress an adequate explanation.

Even after the Obama White House provided a response, Grassley and then-Rep. Darrell Issa, R-Calif., continued their investigation into the firing, releasing a report on the matter later that year. It's premature to know whether Grassley or other senators will similarly investigate after the Trump White House responds to its inspectors general firings.

"Very few folks paid attention to it like they're paying attention to this," Grassley said of the Walpin controversy.

But Walpin was the only inspector general that was fired in such a fashion under the Obama administration. The speed and scale of Trump's dismissals are much broader, and according to critics and some Republicans, much more concerning.

"I look at less at individual circumstances, and the fact that we've had four," Romney said. "I feel that that has the potential of sending a chilling message."

Sen. Chris Murphy, D-Conn., who has drafted his own legislation to protect inspectors general, dismissed the letters, arguing that "they're of absolutely no utility" because Trump ignores them.

"I think the broader problem here is that the Republican Congress, the Republican Senate just believes it's an appendage of the White House," Murphy said. "They act as if they work for the president. So they're allowed to occasionally raise internal objections, but they're never going to do anything to actually change the president's behavior."

Indeed, this president's aggressive antipathy toward oversight underscored how much the powers of congressional investigations and oversight have diminished. Trump's White House has ignored subpoenas, done an end run around congressional funding and relied heavily on acting appointees who escape Senate scrutiny.

Trump underscored his grievances against the inspectors general last week, arguing that he has been "treated very unfairly" by them.

The class of Senate Republicans who have shown outward concern about the dismissals of the inspectors general is small. The issue didn't surface when Trump made an impromptu visit to Capitol Hill earlier last week to have lunch with GOP senators, and Senate Majority Leader Mitch McConnell, R-Ky., has said the firings were well within Trump's authority.

The few who have spoken out include Collins and Romney, who said last week that he had some conversations with administration officials about Linick's dismissal. Sen. James Lankford, R-Okla., and Sen. Rob Portman, R-Ohio, have also gently prodded Trump in a letter to send a message "to the executive branch to work with IGs, not against them."

"Senator Grassley has been so amazing for so many decades, it's kind of unfair for everyone to always turn to him," said Danielle Brian, the executive director for the Project on Government Oversight. "This is very politically difficult for a person to challenge their own party's administration, and he shouldn't be expected to do it by himself."

Any Grassley challenge to Trump would cast a spotlight on fellow Republican Iowa senator, Joni Ernst, who is up for re-election this November in an increasingly difficult political environment for the GOP with its Senate majority at stake.

Grassley was early in his Senate career when then-President Ronald Reagan terminated all the existing inspectors general in 1981, although some were eventually reinstated. During his career, Grassley has not only defended inspectors general, but he has also worked to oust watchdogs he felt fell short of the job.

For instance, in 2003, Grassley and then-Sen. Max Baucus, D-Mont., raised public concerns about Janet Rehnquist, the daughter of the former chief justice who had been serving as the inspector general for HHS, ultimately leading to her resignation.

In 2009, Grassley launched an investigation into the sudden retirement of Fred Weiderhold, who had been the inspector general for Amtrak but left and signed a nondisclosure agreement.

During the Trump presidency, Grassley has proven he can rankle the administration on its priorities if need be.

As chairman of the influential Finance Committee that oversees trade policy, Grassley threatened to hold up ratification of Trump's trade deal with Mexico and Canada until he lifted steel and aluminum tariffs that had sparked retaliatory levies from the two countries that had hurt farmers in Iowa.

In 2017, Grassley wrote a letter to Trump upbraiding an opinion from the Justice Department's Office of Legal Counsel asserting that only committee chairmen could make legitimate oversight requests. At the time, both chambers were controlled by the GOP, meaning all committee heads were Republicans. The White House eventually distanced itself from that OLC memo.

Democrats say Grassley should be willing to go as far as holding up nominees or calling for hearings into the inspector general firings, because he's proven he's willing to do so for other matters.

As he awaits a response from the White House on why Trump ousted Linick and Atkinson, Grassley has started drafting bipartisan legislation that would bar political appointees from serving as acting inspectors general in an attempt to protect their independence. Linick has been temporarily replaced by Stephen Akard, an ally of Vice President Mike Pence who was confirmed as the head of the Office of Foreign Missions at the State Department last fall.

Grassley has declined to name the Democrat he has been working with, but aides said it is Sen. Gary Peters of Michigan, the ranking Democrat on the Senate Homeland Security and Governmental Affairs Committee. That panel would probably have jurisdiction over any hearings on the firings, but that appears unlikely; its chairman, Sen. Ron Johnson, R-Wis., - like most other GOP senators - has not opposed the dismissals.

"Regardless of which party controls the White House or Congress, Senator Grassley has always been a tenacious advocate for effective, nonpartisan oversight," Collins said. "In particular, he believes, as I do, that inspectors general are key to accountability in federal programs and root out waste, fraud and abuse."