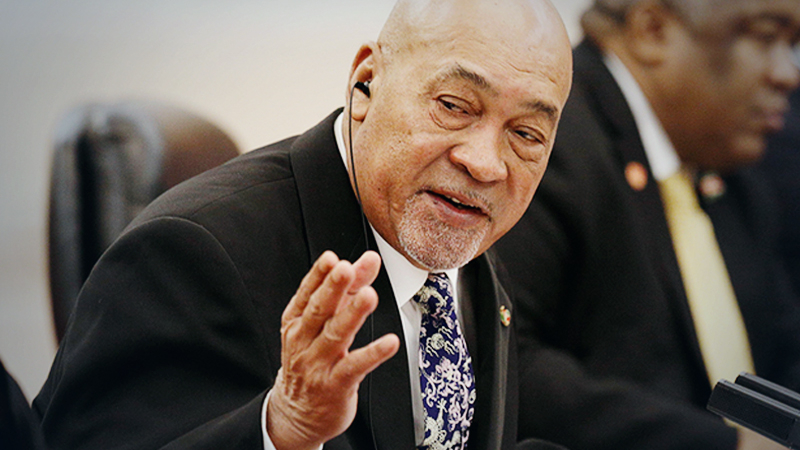 A former coup leader with convictions for cocaine smuggling and murder is seeking re-election on Monday as president of Suriname.

President Desi Bouterse, 74, an ally of Venezuela's Nicolas Maduro, is bidding for a third five-year term as leader of the tiny South American nation, which is in deep economic crisis despite recent oil discoveries and investment from Exxon Mobil.

The main opposition candidate, Chandrikapersad Santokhi, a former justice minister, has pledged to restructure the nation's debt if he wins.

The electoral authority extended voting by two hours to 9 p.m. local time. A woman was shot outside a polling station while another voting booth had the wrong documents, invalidating more than 200 ballots that had been cast, local media reported.

The government lifted a nationwide curfew, in place to contain the spread of the novel coronavirus, for Monday and Tuesday so the election could be held. International observers from the Organization of American States were tested for the virus upon arrival and remained in quarantine until voting began.

Voters will elect new members of a 51-seat parliament on Monday with 17 political parties registered to participate. Parliament will then elect a president.

Investors are pricing in a high likelihood of default on nearly $700 million of overseas debt whoever wins. The nation's dollar bonds due 2026 have slumped deep into distressed territory, trading at just 29 cents on the dollar from about 87 cents in March.

Drillers suspect Suriname may have significant oil deposits off its coast after Apache made a major discovery there this year. Neighboring Guyana is in the process of becoming an oil producer as it starts to tap massive offshore fields that are estimated to hold 8 billion barrels of crude.

Suriname's government has a $23 million coupon due at the end of June and "had to go to the sofa, lift every single pillow and find pennies" to make an April coupon payment, said Nathalie Marshik, emerging market analyst for Stifel Financial. "Everybody is going to be checking with their trustee on June 30 to see whether or not it happened."

S&P Global Ratings said in April that there is a 1-in-3 probability of the nation defaulting over the next 12 months.

Bouterse, who has dominated the nation's politics in recent decades, was found guilty by a local court last year of the 1982 killings of political opponents. He has denied the charges and is appealing the decision. He has also been convicted in absentia in the Netherlands for cocaine smuggling.

Bouterse led a group of army sergeants that overthrew Suriname's democratic government in 1980. The military then ruled the country until 1987.

The IMF forecasts that Suriname's economy will contract 4.9% this year, which would be its worst performance in four years.