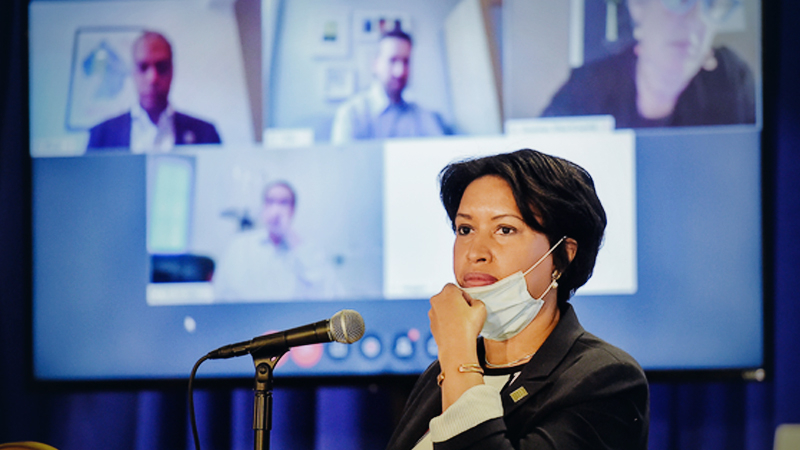 District of Columbia Mayor Muriel Bowser, a Democrat, adjusts her face mask as she presides over a meeting with council members on Monday, May 18, 2020. MUST CREDIT: Washington Post photo by Bill O'Leary

WASHINGTON - District of Columbia Mayor Muriel Bowser, a Democrat, said Monday that the city is "back on track" to move toward a gradual reopening after seeing a slight spike in new cases over the weekend.

Meanwhile, Virginia reported a record number of new cases - mostly in the Washington suburbs - but the area's leaders said they are planning for a transition to Phase 1 of reopening starting at the end of the week.

Bowser said she would wait until Wednesday to decide whether to move Friday to Phase 1 of the city's reopening. She said she wants to see 14 days of declining community spread - calculated by the date of symptom onset and excluding cases at confined facilities such as nursing homes - before she makes a decision. The city "reset" to Day 11 of declines after an increase over the weekend. Bowser said officials again saw a decline in cases Monday that put D.C. at Day 12 on the downward trend.

"We lost some progress over the weekend," Bowser told NBC4 Washington on Monday. "We're continuing to ask people to stay at home, to wash their hands, to avoid large gatherings - try not to go to go to parties or barbecues and continue to social distance. What we know is that this virus is still circulating in our region."

The D.C. Health Department reported Monday that there were 115 new positive cases, bringing the total to 8,225. D.C. also reported eight covid-19-related deaths, all among residents in their 60s, 70s and 80s.

Bowser said the city remains on track to have the contact tracers and testing needed to meet its goals in those categories. She had planned to make an announcement Tuesday on the timing of the reopening and what it would include.

Still, northern Virginia leaders sent a letter to Gov. Ralph Northam, a Democrat, on Monday asking that the region be included when the rest of the state moves to Phase 2 of its reopening, provided that data supports it.

The letter also says the jurisdictions "have been making preparations to support a transition into Phase 1 at midnight on May 28th."

Northern Virginia was not included in the state's gradual reopening that began May 15, with restaurants licensed for outdoor seating allowed to resume operations with limited capacity. Barber shops and beauty salons were also allowed to reopen with some restrictions. The city of Richmond and Accomack County on the Eastern Shore, which has had an outbreak related to poultry processing plants, also were not included.

Officials said then that the region, along with D.C. and its Maryland suburbs, had not met critical benchmarks.

However, Monday's letter to Northam included an assessment from the health directors in the city of Alexandria and Arlington, Fairfax, Loudoun and Prince William counties saying that four of six criteria had been met, including 14 days of declines in the percentage of positive tests and hospitalizations, increased testing and hospital bed capacity. The health officials said goals for contact tracing and personal protective equipment have not been met.

Virginia reported 37 new deaths Monday, bringing its total to 1,208. The state has 37,727 reported cases of the virus. In explaining the spike in cases Monday, the state health department said in a statement that it performed maintenance on its reporting system Sunday, so data reported during that time was added to Monday's total.

Maryland reported 839 new cases Monday, bringing its total to 47,152. Hospitalizations continued to decline in Maryland, with the state reporting that 1,279 people are hospitalized - a drop of more than 25% since April 30.

The state reported 25 new deaths Monday. Maryland had a total of 2,302 deaths reported as of Monday - 562 of which were in Montgomery County and 497 in Prince George's County.

The holiday weekend was not without its hiccups - including Northam being criticized on social media for not wearing a mask when he mingled with visitors in Virginia Beach and images of a crowded Ocean City boardwalk. Many visitors appeared not to be wearing masks, and little social distancing was apparent.

But there was also kindness and patience among beachgoers this weekend, said Jackie Inman Burns, who owns a bookstore in Bethany Beach, Delaware. Burns, who opened Bethany Beach Books for appointments Thursday, said customers all brought their masks or were willing to wear ones that the store provided. They paid attention to markers intended to help them keep six feet from one another and were considerate of staff members and of one another, she said.

"Seeing humans being nice to each other - that's the good thing that has come out of this," Burns said.

Retail and restaurants in Delaware will be able to reopen June 1, at 30% capacity, according to Gov. John Carney's reopening plan. Carney, a Democrat, said he would be closely watching to see how this weekend went at the Delaware beaches as he looks ahead to the rest of the summer.

Alex Heidenberger, who owns Mango's and Heidaway, two restaurants just off the boardwalk, said that over four days, he did the amount of business that he would do in one during a typical Memorial Day weekend. But he said customers and business owners alike generally did a good job of trying to adhere to the rules, including wearing masks and keeping their distance.

"Everyone is really committed to getting to the next step," he said.

In D.C., Bowser said officials are closely watching the rate of people who test positive for coronavirus in the city and its suburbs, which Deborah Birx, the lead coordinator of the White House coronavirus task force, said Friday was one of the highest in the country. Bowser said that additional testing sites will open this week and that testing for asymptomatic residents will be expanded.

On Monday, the Alexandria, Virginia, Health Department set up two all-day testing sites. Natalie Talis, a health department official, said the city's goal was to test 3,000 people in one day; by 11:30 a.m., about 600 people had been tested. By 5:30 p.m., officials said they had tested nearly 3,000 people and were on track to hit their goal.

"We want to make sure we're reaching the most vulnerable populations," Talis said. "We're trying to pull out all the stops. If people need testing, it's here, today. . . . You don't need appointments. Some people might feel more comfortable in a situation like this."