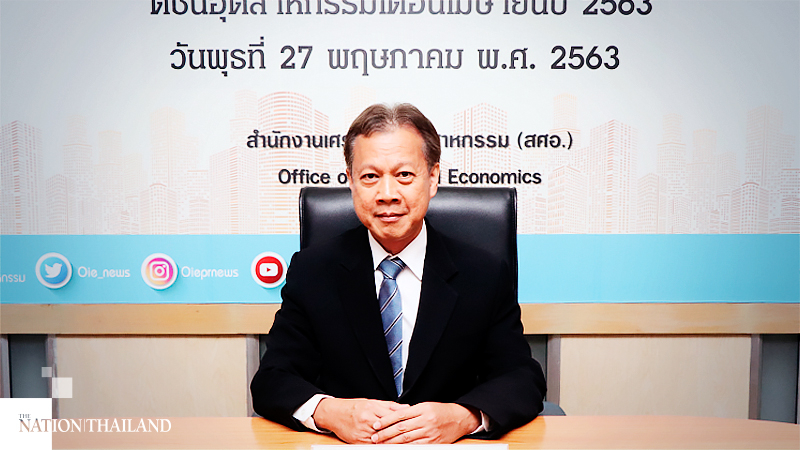 Manufacturing output in April dipped to its lowest level in almost nine years due to global economic contraction and suspension of operations in some industries, the Office of Industrial Economics (OIE) said on Wednesday (May 27).

‘“This is the lowest point in 101 months, since November 2011, when Thailand suffered major flooding that saw the MPI fall to 66.95 points. The reason behind this global economic contraction is the Covid-19 pandemic.”

“Furthermore, many manufacturers in Thailand decided to temporarily halt operations as demand fell. Among them was the automotive industry which has nearly halved production, with production volume at 51.87 per cent of total capacity,” he added.

However, sectors still able to fulfil demand from consumers during the outbreak saw their MPI level rise in April, including the food industries whose MPI rose by 0.5 per cent year on year.

“The food industry MPI expanded for the first time in nine months due to a rise in import orders from the US and China,” said Itthichai. “If the sugar industry, which suffered a 36 per cent drop on the MPI due to drought, is removed, food producers have enjoyed a 7.2 per cent rise. The pharmaceutical industry also saw an increase of up to 38.52 per cent in MPI from last year, after sharp rises for the past three months.”

The OIE estimated that the MPI will drop further in the second quarter of 2020 as more industries decide to suspend operations.

“The extent of the fall depends on the easing up of lockdown measures by the Thai government, as this could boost domestic consumption and increase demand. It also depends on the export situation, which is reliant on efficiency of disease control among our trade partners,” added Itthichai.