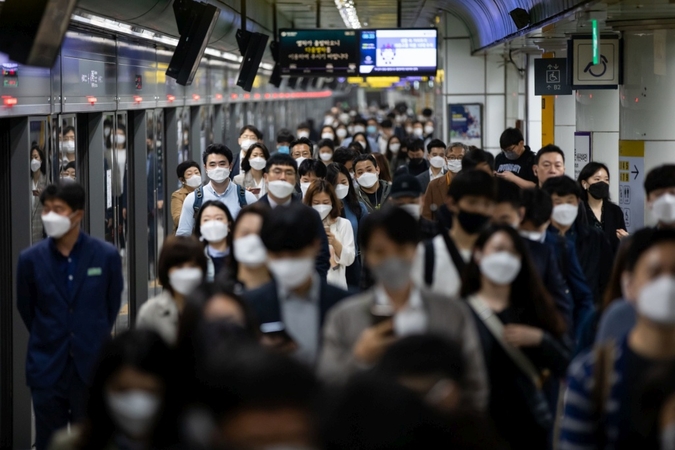 Passengers in a subway station in Seoul, South Korea, on May 18., 2020. MUST CREDIT: Bloomberg photo by SeongJoon Cho.

South Korea, which won praise for containing the coronavirus without mass lockdowns, reported its biggest daily surge in infections in seven weeks, underscoring the challenge in permanently taming the illness in the absence of a viable vaccine.

The Asian nation reported 40 new cases for Tuesday, the biggest one-day increase since April 8, according to data from Korea Centers for Disease Control & Prevention, or KCDC, with most of the cases connected to a distribution center of an e-commerce firm. This takes the total tally to 11,265 cases while the virus-linked deaths were unchanged at 269.

Cases connected to a logistics center of Coupang Corp. increased to 36 with KCDC estimating that about 4,000 people may have been exposed to the virus. More cases are expected to emerge from this cluster, it said.

The second spike in a month comes after the country reported a cluster of infections linked to nightclubs in Seoul that has added almost 260 cases. These flare-ups signal the long drawn battle governments face in curbing the highly-contagious pathogen and puts to test Korea's strategy of mass testing and rigorous contact tracing as it races to fend off a second wave of infections.

"While we're focusing on preventing community-wide infections, facilities that are used by unspecified individuals are exposed to infections, and it's been difficult to track down contacts since the number of cases have been rising in large-scale workplaces," Jung Eun-kyeong, head of KCDC, said during a briefing Wednesday.

The daily new cases in South Korea had dipped to between 12 and 35 for the last three weeks, marking a hard won success against the virus.

In early March, it had the second highest number of infected cases globally after China, as infections spiked to more than 800 a day because of a cluster linked to a religious sect. But within a month, it was able to slow the outbreak without severe measures such as a nationwide lockdown or banning overseas travel.

The local authorities instead relied on drive-in centers and phone booth-like stalls for testing and tracked down potential infections by tracing patients' credit card transactions and smartphone usage.