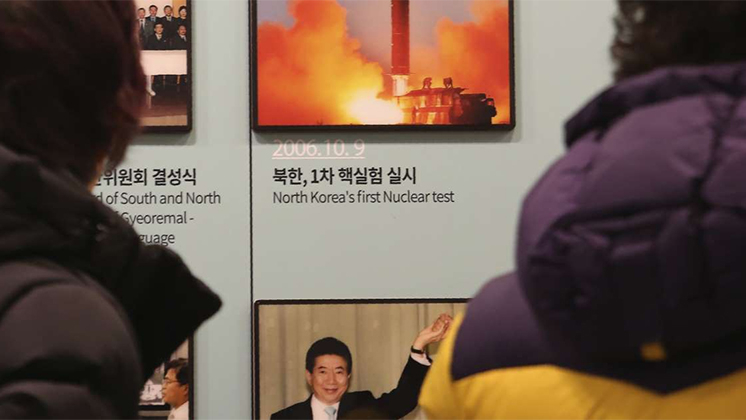 WASHINGTON - The U.S. government has charged 28 North Korean and five Chinese individuals with facilitating more than $2.5 billion in illegal payments for Pyongyang's nuclear weapons and missile program in what court papers describe as a clandestine global network operating from countries including China, Russia, Libya and Thailand.

In a 50-page federal indictment unsealed Thursday in the District of Columbia, the Justice Department accused the individuals of acting as agents of North Korea's Foreign Trade Bank in what officials say is the largest North Korean sanctions violations case charged by the U.S.

Working for the FTB - which is North Korea's primary foreign currency bank and under sanctions for facilitating nuclear proliferation - the agents allegedly set up more than 250 front companies and covert bank branches around the world to mask payments transiting the U.S. financial system, including through several Chinese banks and for equipment from Chinese telecommunications giants Huawei Technologies Co. and ZTE Corp., charging documents said.

"Through this indictment, the United States has signified its commitment to hampering North Korea's ability to illegally access the U.S. financial system, and to limiting its ability to use proceeds from these illicit actions to enhance its illegal weapons of mass destruction program," Michael Sherwin, acting U.S. Attorney for the District, said in a statement.

The massive enforcement action comes as United Nations experts have detailed North Korea's widespread evasion of sanctions by using agents of state-owned and other banks overseas to facilitate a global web of illicit oil, arms and coal deals to bring in foreign currency. The efforts have been augmented through offshore, ship-to-ship transfers, large-scalecryptocurrency hacks and ransomware attacks.

The Trump administration had outpaced predecessors at building a global coalition to pressure Pyongyang before talks started. But the biggest hole in sanctions enforcement remains U.S. reluctance to penalize major Chinese banks through which North Korea's illicit funds flow for fear of triggering Chinese retaliation and a wider financial war.

The indictment reveals the extent to which the government believes China has facilitated the illicit network. Though U.N. member states since early 2016 are supposed to have expelled branches of North Korean banks, the indictment said such branches are still operating in Beijing and Shenyang, China.

And it said that five Chinese citizens have been overseeing covert FTB branches, including in Shenyang and Libya.

"I'll believe it's 'maximum pressure' when those banks begin to face nine- and 10-digit penalties, like the ones President Obama imposed on European banks that broke Iran sanctions," said Stanton, who has advised House and Senate staffers on North Korea sanctions law.

Evans J.R. Revere, a former State Department official focused on East Asia, lauded the U.S. government for going after Chinese banks and other entities enabling North Korea's illicit activities. "This will complicate U.S.-China relations, but that may be a necessary risk if the U.S. is serious about pressuring Pyongyang," he said.

The charges against North Korean bank officials and agents marks an escalation of U.S. enforcement efforts, potentially restricting the number of countries where Pyongyang is willing to risk sending its personnel and signaling greater U.S. willingness to risk confrontation with host countries to expel, arrest or extradite them, analysts said.

None of the defendants are in custody, officials said. The U.S. government also filed asset forfeiture charges and has already quietly seized more than $63 million, the indictment said.

U.S. officials including Secretary of State Mike Pompeo and Trump national security adviser Robert O'Brien have complained publicly this year that China and Russia have weakened sanctions and aided illegal smuggling. The Justice Department last year charged Huawei, which is supported by the Chinese government, with bank fraud and Iranian sanctions violations. In 2017, ZTE pleaded guilty to violating U.S. sanctions against Iran and North Korea, and paid $1.19 billion in fines imposed by the U.S. government.

Thursday's actions reflected the latest U.S. legal actions scrutinizing those two firms' conduct in particular, as well as that of five unnamed Chinese banks that worked with FTB, even as Washington and Beijing have moved to ease tensions over a trade war championed by Trump.

Thursday's indictment did not name Huawei, but included allegations that align with reporting last July by The Washington Post that Huawei allegedly partnered with a Chinese state-owned firm, Panda International Information Technology Co. Ltd., and a second company to build a major North Korea wireless telecom network, according to documents and people familiar with the projects.

The indictment charged two co-defendants with arranging to pay for Panda's work in North Korea through U.S. dollars by stating falsely to a Chinese bank in 2014 that an FTB front company in Shenyang was wiring payments to Panda and the second company, Dandong Kehua Economic and Trade Co., for legitimate equipment purchases, as previously reported by The Post.

According to the charges, an employee for Huawei, referred to as "Chinese telecommunications company 1" in the indictment, also received a receipt showing that a Nov. 5, 2015, payment to a Chinese company for a shipment of electronic goods to North Korea had been blocked by a U.S. bank. The following day the employee received an updated receipt from the company and an FTB agent in Shenyang that falsely stated the goods' destination was Hong Kong, when it was in fact North Korea, the indictment said

Spokespeople for Huawei and Panda could not immediately be reached for comment.

In a statement last year, Huawei said it "has no business presence" in North Korea, and "is fully committed to comply with all applicable laws and regulations in the countries and regions where we operate, including all export control and sanction laws and regulations" of the U.N., United States and European Union.

The indictment also reveals details of an earlier prosecution involving a Hong Kong shell firm hit with sanctions in 2017 that worked with Chinese telecommunications maker ZTE.

The new indictment charges three defendants who officials say managed the Mingzheng International Trading Limited front company to launder money for FTB. The activity occurred, according to the indictment, despite intermittent failures in which three Chinese banks at times blocked payments, and one advised that a U.S. bank stopped the transaction because of U.S. sanctions aimed at the proliferation of weapons of mass destruction.

The indictment said Mingzheng and Dandong Kehua worked with "Chinese telecommunications company 2," a reference that aligns with ZTE, to purchase handsets from at least 2013 to 2015 despite a prohibition on shipment to embargoed countries.

The U.S. indictment draws on Chinese bank records, including a recorded July 2014 phone call by one Mingzheng manager about opening an account with "Chinese Bank 4," which later passed on the U.S. sanctions warning.

The records appear to be ones requested under Justice Department subpoenas upheld last July by a U.S. appeals court to three large Chinese banks linked to Mingzheng that U.S. investigators were probing, and which later identified themselves as the Bank of Communications, China Merchants Bank and Shanghai Pudong Development Bank