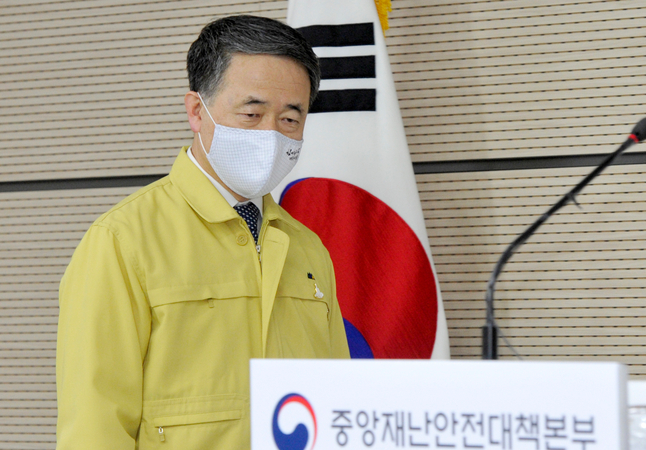 Seoul and the adjacent areas are heading for another phase of stringent physical distancing, set to last for the next two weeks, as fresh flare-ups of novel coronavirus cases emerged across the metropolitan region.

In less than a month since relaxing physical distancing on May 6, South Korea is restoring the guidance in the greater Seoul area -- which includes Incheon and Gyeonggi Province -- until June 14.

Making the announcement on Thursday afternoon, Health Minister Park Neung-hoo said the boosted measures were meant to curb the spread preemptively, so that in-person classes can resume normally for students.

Korea Centers for Disease Control and Prevention’s Deputy Director Kwon Jun-wook said in a Thursday briefing as most of the recent patients were young people, none of them were having severe cases of the disease, so far, he said.

“Three weeks since the first case linked to Itaewon nightclubs was discovered earlier this month, the infections have spread mainly via high-risk spaces such as bars, karaoke lounges, restaurants, religious establishments and big workplaces,” Kwon said.

At least seven workers at a call center in central Seoul have been confirmed with the disease as of Thursday, he said, with all of the employees and their contacts undergoing testing.

Eighty-two people with ties to a Coupang logistics center in Bucheon, Gyeonggi Province, have tested positive for COVID-19, since the first case there was identified on Monday.

As infections spread rapidly among workers at the e-commerce company, the city announced Wednesday it was reinstating “intense” physical distancing.

Bucheon Mayor Jang Deok-chun said in-person classes will be once again suspended except for high school seniors, and that high-risk communal spaces will be allowed restricted operations only.

In a Facebook statement posted Thursday, the mayor said the city has identified 4,159 people with ties to the distribution center, 3,445 of whom have undergone testing. All of them have been given quarantine orders. Around 20 percent were without symptoms.

He said the infected Coupang workers were “hardworking people” who have had to overwork due to the virus-induced rise in demand for delivery services.

“Coronavirus is nobody’s fault, and getting sick is no cause for blame,” he said.

Kim urged those who have had possible exposure to report to authorities and get tested.

“Families of the affected facilities should not be going to work, school or engaging in other social activities,” he said.

The health minister said in a Central Disaster Management Headquarters meeting Thursday that the lack of safety precautions in the workplace seems attributable for the outbreak at Coupang centers.

“Virus countermeasures such as wearing face masks and taking leave when feeling sick do not appear to be have been followed at the said facilities,” he said.

Health officials launched inspections at logistics facilities across the country after the Bucheon outbreak to locate on Thursday another such center in Goyang, a city north of Seoul, with an infected employee. The Goyang center has since been shut down.

“Installing partitions at cafeterias, or stationing desks a safe distance apart from each other are examples of such efforts,” he said.

Lee Han-bit, 28, who worked at a Coupang logistics center in Icheon, another city in Gyeonggi Province, for six months until about three weeks ago, said that like him, a lot of the employees there were day workers.

“Most employees at distribution centers come and go, working part-time shifts, because of the fluid workload.”

Face masks were handed out regularly and there was daily thermal screening, he said. But given the nature of the job, new batch of workers were bound to cross paths and mingle in vast numbers each day and some of them may have been virus carriers.

Experts are divided over prospects of the freshly occurring cases evolving into a second wave.

Lee, who is advising the government’s coronavirus guidance, said the growing caseload may be signaling “the end of a beginning” of backlash following the fresh infections.

Former KCDC chief and pulmonologist Dr. Jung Ki-suck said in a phone interview the odds of a next big wave arriving in the coming weeks remained unlikely, as viruses causing respiratory illnesses tend to weaken during summer.

“Had a similar development taken place in fall or winter, I would have said ‘the next wave’ was highly probable,” he said. “Based on common understanding of respiratory viruses such as the common cold, a cascade of patients such as that witnessed in late February is not likely this time, I would say.”

“But then again, this is an unknown virus that majority of people don’t have immunity against -- nothing can be said with certainty,” Jung added.