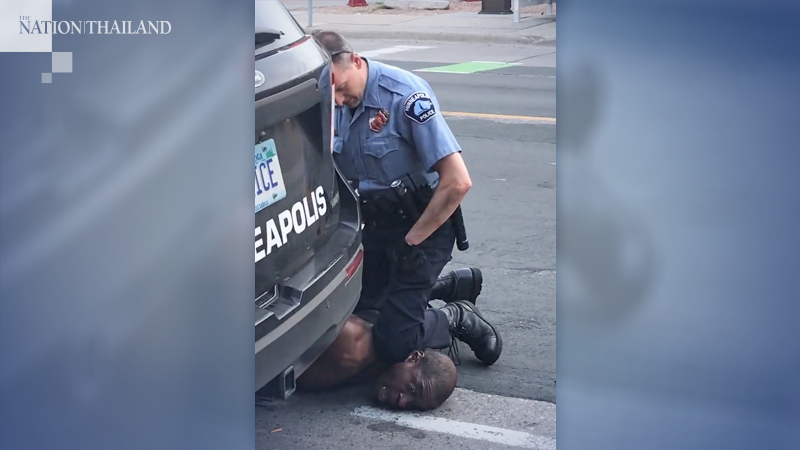 Four Minneapolis police officers were fired Tuesday, authorities said, amid protests and outrage after a viral video showed one of them kneeling on the neck of a handcuffed black man who cried that he could not breathe and later died.

A bystander's video of the incident on the city's south captured George Floyd telling the officers "I cannot breathe" as he is pinned to the ground, and as an increasingly distraught crowd of onlookers pleads with the officer to move his knee.

The officers involved in the incident have not been identified, but Minneapolis Mayor Jacob Frey, a Democrat, announced Tuesday afternoon that their employment had been terminated.

The Minneapolis Police Department originally said Floyd, who was stopped Monday night on a report of a forgery, had "physically resisted officers." In a Tuesday interview with local outlet North News, Frey said, "it became clear that the original statement was not accurate."

Arradondo said during the news conference that he had decided to ask the FBI to investigate after receiving "additional information" about the incident from a community source, but he declined to elaborate.

Calling in the FBI was "the very clear and obvious choice when you watch the footage provided in the civilian video," Frey said in the North News interview.

"For five minutes we watched as a white officer pressed his knee into the neck of a black man who was helpless," the mayor said. "For five whole minutes. This was not a matter of a split-second poor decision."

The quick dismissals of the officers contrast with several previous high-profile incidents, including the 2014 death of Eric Garner in New York. After other deadly encounters between civilians and police, officers involved have often retained their jobs for a time - including the police officer recorded with his arm around Garner's neck, who was fired five years later.

Minneapolis-area law enforcement has faced criticism in recent years over its use of force. In a 2016 incident that drew widespread condemnation, an officer with the suburban St. Anthony Police Department shot and killed 32-year-old Philando Castile during a traffic stop, the aftermath of which was streamed live on Facebook.

And in 2017, a Minneapolis police officer fatally shot 40-year-old Justine Damond after she called 911 to report a possible assault near her house. Damond's death followed the acquittal of the officer who killed Castile, exacerbating the already tense relations between law enforcement and the community.

Floyd's death came amid a national conversation about the rush to judgment of unarmed black men, both by police and civilians. This month, authorities in Georgia arrested two white men after one in February shot and killed a black jogger, Ahmaud Arbery, telling police they believed he was involved in local burglaries. A prosecutor initially argued the actions of the men, father and son Gregory McMichael and Travis McMichael, were in accordance with the law.

On Monday and Tuesday, social media users were consumed with the story of a white woman, Amy Cooper, who called 911 on a black birdwatcher who asked her to leash her dog in New York's Central Park, telling a dispatcher that he had threatened her life.

In Minneapolis on Monday, two police officers approached a parked vehicle in the 3700 block of Chicago Avenue South about 8 p.m., according to security footage reviewed by The Washington Post. After a brief struggle with the driver, who appeared to be Floyd, they placed him in handcuffs and sat him against the wall of the Dragon Wok restaurant.

Before police arrived, three people were seen in the footage walking out of the nearby Cup Foods convenience store, and one spoke with the people in the vehicle.

Billy Abumayyaleh, whose teenage son works at the market, told The Post that his son "confronted the man about a fake $20 bill" before contacting police. Abumayyaleh said his son tried to intervene when the officer put his knee on Floyd's neck but was stopped by another officer, who pushed him away.

Darnella Frazier, who filmed the police encounter with Floyd, was on her way to visit friends when she saw the incident unfolding outside the Cup Foods market. She quickly began recording the encounter in a 10-minute video later shared to Facebook.

"When I walked up, he was already on the ground," Frazier said in a different Facebook video. "The cops . . . they was pinning him down by his neck and he was crying. . . . They wasn't trying to take him serious."

As more people gathered around the encounter, the man pleaded that his whole body was in pain. Frazier recalled that his face was being pressed so hard against the ground that his nose was bleeding.

"You're going to just sit there with your knee on his neck?" one bystander said on the video.

Minutes later, the man appeared to be motionless on the ground, his eyes closed and head lying against the road.

Another asked, "Did you kill him?"

Later, the unconscious man was loaded onto a stretcher and into an ambulance. Bystanders who remained in front of Cup Foods pointed at the two officers and said the incident would haunt them "for the rest of your life."

"The police killed him, bro, right in front of everybody," Frazier said on Facebook. ". . . He was crying, telling them like, 'I can't breathe,' and everything. . . . They killed this man."

The case will be separately investigated by the state Bureau of Criminal Apprehension, which, according to the Star Tribune, investigates most in-custody deaths.

The agency said in a statement that it would present its findings to the county prosecutor's office for review.

As it circulated late into the day Tuesday, the video continued to draw denunciations. In neighboring St. Paul, Mayor Melvin Carter, a Democrat tweeted that it was "one of the most vile and heartbreaking images I've ever seen," adding, "This must stop now."

Sen. Amy Klobuchar, D-Minn., described the incident as "yet another horrifying and gut-wrenching instance of an African American man dying." She called for "immediate action," including a thorough outside investigation and accountability for those involved.

Floyd was a father and a security guard who worked at Conga Latin Bistro and had previously lived in Texas, said Jovanni Thunstrom, the restaurant's owner. He described Floyd as the kind of employee who would go out of his way to help a customer, offering a safe ride home to those who had too much to drink and once helping a woman who locked her keys in her car.

"When I heard the news, I saw the video, I couldn't believe it was him," Thunstrom told The Post, calling Floyd a "brother" and a friend. "He was a great person, a great worker. I'm going to miss him."

Thunstrom said he could not understand the officers' treatment of Floyd.

"They are supposed to serve and protect, but Floyd didn't get either," he said. "He didn't get served or protected. He got choked."

Hundreds of people gathered along Chicago Avenue on Tuesday night, standing in the rain for hours at the spot where Floyd had his fatal altercation with police. They waved signs reading "Abolish the Police" and "I Can't Breathe." "Say his name," they chanted again and again. "George Floyd."

A large crowd marched to the city's 3rd Precinct police headquarters, where some protesters clashed with officers clad in riot gear. Tear gas was fired to disperse the crowd, according to the Star Tribune.

Adding to the tensions were concerns about the novel coronavirus. With cases on the rise, Minneapolis remains under a "safer-at-home" order, but city officials said Tuesday that they would not try to stop protesters from gathering to speak out and express their anger at Floyd's death.

At the protest, many wore masks - many distributed by organizers who sought to keep the crowd safe - but there was little effort made to keep healthy distances.

"It's scary to come down here in the middle of the pandemic, but how could I stay away? How could any of us stay away?" said Anita Murray, who visited the scene with her 6-year-old daughter.

Murray, who is Mexican American, said she felt it was important to bring her daughter to the scene as a lesson about "unfairness in the world."

"She's little, but I hope she remembers this," she said. "Hopefully, she will remember this as a turning point for good."