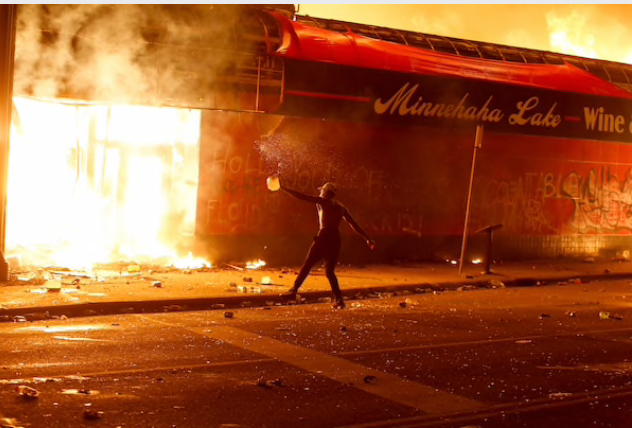 A protester stands outside the Minnehaha Lake Wine & Spirits store in Minneapolis as it burns. MUST CREDIT: Photo by Joshua Lott for The Washington Post.

Fires raged through the night in Minneapolis after a group of demonstrators swarmed a police station, which officers had been ordered to abandon as protests intensified in a city rocked by the death of a black man in police custody. Demonstrators breached a door and entered the Minneapolis Police Department's Third Precinct station as fires spread, resulting in destruction and further upheaval.

In an early morning Tweet, President Donald Trump called the protesters "THUGS," while suggesting military intervention and warning in a tweet that there could be additional violence if the chaos continued. "When the looting starts, the shooting starts," the president wrote. Trump's tweet was later flagged by Twitter for "glorifying violence." 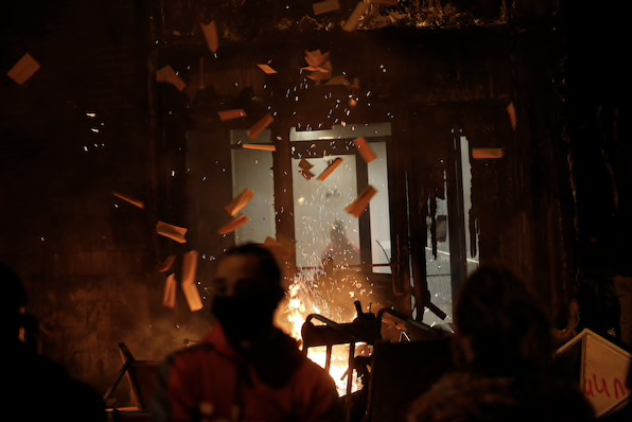 The scene came at the end of a day in which protesters in Minnesota and beyond demanded that four now-fired officers be arrested in a case that has generated nationwide outrage. Video captured a white police officer pressing his knee into George Floyd's neck in a banned maneuver on Monday as Floyd repeatedly said, "I can't breathe." Floyd later died.

In other significant developments:

-- A CNN crew was arrested early Friday while reporting on the protests in Minnesota. CNN said in a statement that the three journalists were arrested "for doing their jobs, despite identifying themselves." Correspondent Omar Jimenez was released from custody and back on the air a short time later.

-- Minnesota Attorney General Keith Ellison, D, condemned Trump for tweets that he said have contributed to the "angry cycle" of violence in Minneapolis. "Calling people thugs and calling on people to get shot stems from the same sort of attitude that resulted in the death of George Floyd," Ellison said on "CBS This Morning."

-- Minneapolis Mayor Jacob Frey, D, said he ordered police to vacate the Third Precinct before it was overrun by protesters. "The symbolism of a building cannot outweigh the importance of life, of our officers or to the public," Frey said early Friday, noting that he made the call after learning there "were imminent threats."

-- The unrest spread from Phoenix to Columbus, as people converged in city centers and descended on state capitol buildings. Gunfire broke out in multiple cities, including Louisville, where authorities say seven people were injured during a protest of the fatal police shooting of Breonna Taylor. Shots were also fired at the Colorado statehouse.

-- The House Judiciary Committee called on the Justice Department to investigate whether the death of Floyd was part of a "pattern or practice of unconstitutional conduct" by the Minneapolis Police Department.

The growing intensity of the protests in Minneapolis after a third straight night of tumult is evidence that the city's strategy to calm residents through police force is not working, City Councilman Jeremiah Ellison said Friday.

Speaking on NBC's "Today" show, Ellison said the pain, anger and destruction that have gripped the city were preventable and that the city wasted a "great opportunity" on Tuesday evening, the first night of demonstrations over the death of George Floyd, to respond more effectively.

Minneapolis police were widely criticized for their aggressive response to the mostly peaceful protests on Tuesday. By the next night, the tensions, violence and damage had escalated.

"That's the strategy we pursued, and that strategy has prove to be an unmitigated failure," Ellison said.

"What people are responding to is not just the death of Mr. Floyd," he added, listing other black people who have been killed by police in the Minneapolis metro area, such as Jamar Clark and Philando Castile.

Council Vice President Andrea Jenkins told CNN that the situation has spiraled out of control.

"It is very much complete chaos, or it was," she said, noting that flare-ups around the city have stretched response resources thin. "It's very much a spiraling situation."