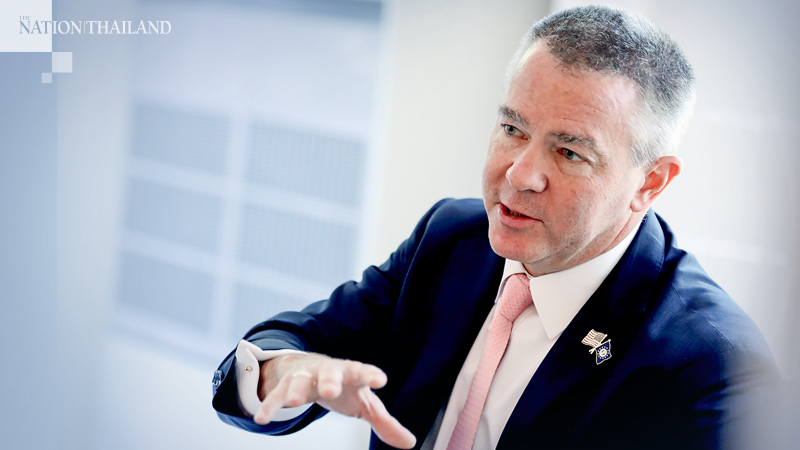 The US will always be a ‘better friend’ to Thailand

In an exclusive interview, Ambassador DeSombre explains how the China-US spat will not affect relations in the region and why nations will not have to take sides. Nobody will have to take sides in the US-China row, US Ambassador to Thailand Michael George DeSombre said in an exclusive interview with The Nation Group, and added that he expects more American companies to invest in the Kingdom.

The envoy also reiterated that his country is a “better friend” to Thailand and other Asean countries.

Regional leaders have recently voiced concerns about the escalating tensions between the two largest economies and are worried that this row may force them to take sides. DeSombre responded to these concerns and the latest round of tensions by saying that Washington, for the first time in a long time, is seeing China for what it is, “not as we hope it should be”.

The US has threatened to impose sanctions on China for imposing an unfair national security law in Hong Kong.

“So, we see challenges coming out of China and are addressing them directly. Obviously, that creates more tension, instead of ignoring the problems that have been created by the previous administration.

“Unfortunately, that’s not happening much. But we are encouraging them to do so,” he said.

“But we do have a trade deal for example, and we are looking forward to them implementing the ‘phase one trade deal’, which is a good example of finding common ground, given the other challenging situations,” he added.

Beijing and Washington signed the trade agreement in January this year, which is believed to be quite limited in scope.

Meanwhile, some observers have argued that the US has taken a tough stance against China because the US presidential elections are approaching. DeSombre, however, dismissed this notion.

“You should ask China whether the presidential election had anything to do with their decision to suddenly impose the national security law in Hong Kong. That is their choice, not ours,” he said.

“Also, I think various activities in the South China Sea, such as militarising islands, sinking Vietnamese fishing vessels among others … those were not our decisions.”

However, he believes, the US-China spat should be resolved.

“I think things in international relations move in cycles. So, I’m optimistic that once China realises that it cannot take advantage of other countries, then both sides can start operating again,” he said.

“One area that we see some concerns about is China’s actions that are contributing to drought here in Thailand, such as controlling the flow of water in the Mekong River, and failing to stop precursor chemicals from going to Myanmar, which is allowing massive production of methamphetamine, which is flowing into Thailand. These are our concerns,” he said.

As for US-China trade deals, he said Washington hopes Beijing will implement the phase one trade deal. “We hope they will live up to their agreement,” he said.

“I think President [Donald Trump] has made clear the steps we expect China to take to implement the phase one deal. If they don’t, it will be very disappointing,” the envoy said.

When asked about the slowdown of the global economy, DeSombre said he sees an opportunity in the crisis. “There’s always an opportunity in crises, and that is where my discussions with the Thai government have really focused on – using this opportunity to move company operations to Thailand.

He added that this presents a great opportunity to Thailand, because it is a safe, reliable, secure location for operation.

“In a meeting I had with Deputy Prime Minister Wissanu Krea-ngam, he was very supportive and indicated that the prime minister had read by my op-ed and mentioned in the Cabinet meeting that there will be an opportunity for use to cooperate with the government to figure out which industries to focus on and what policies to implement to bring more US supply chains in Thailand,” he revealed.

He added that US firms are looking to invest in aerospace, defence, advanced materials and electronics.

“We have been looking at some areas like aerospace and defence, which I know that Thailand want to increase its ability in, so it doesn’t have to always depend on foreign countries. I have been in discussions with some companies about that,” he said.

Similarly, he said, in advanced materials or electronics, especially things related to the supply chain in the electronic manufacturing sector, Thailand has started moving slightly to the high-end of production.

“There is one advanced materials company that I have spoken to recently. They recently conducted a large review on where they should base their manufacturing unit in Asia. They reviewed 24 countries based on 10 different metrics, which showed that Thailand is the place to base its first Asian manufacturing unit. The company intends to break ground in their facility this September,” he said.

Asked whether US companies are convinced that they should move their facilities from China or Vietnam to Thailand, he replied that some area already doing that, while others are considering the option. “There are many companies that have never thought about that before, but we definitely see more of that, and that is what I want to do – really help companies consider Thailand,” he said.

DeSombre added that though the trade mission has been on hold amid Covid-19, he has actually held a discussion with the Prime Minister’s Office about holding a joint event with the Board of Investment, which can be used as a platform to track American companies. However, this can only be done when travel returns to normal.

As for Trump’s “America First” policy, which has been slammed across the globe, DeSombre defended it by saying: “There has been a misunderstanding about America First. I think if you ask every government in the world what their top priority is, they will say it is the citizens of their country. And that’s what it should be. That’s what you want the Royal Thai Government to be saying – that the top priority are its own citizens,” he said.

“Unfortunately, we have seen some multilateral organisation starting operations in ways that aren’t consistent with the way they were supposed to operate. I think the World Trade Organisation is a classic example in that regard. In China’s accession to WTO, where it continues being treated like a developing country even though it is the second largest economy in the world – that just doesn’t make any sense. So, it is organisations like that that we think need to be put back to their proper position,” he said, though he insisted that the US is not turning away from multilateral organisations.

“We just feel that the WTO and the World Health Organisation need to be reformed to actually achieve their purpose. For instance, the WHO did not raise the issues of human-to-human [Covid-19] transmission or the infection rate of the disease, which then hurt Thailand specifically.

“On January 13, we had the first Covid case in Thailand. At the same time, WHO still heralded China’s views that there is no human-to-human transmission, even though there is great evidence of that in China. It was only at the end of January that WHO admitted that – making Thailand lose 18 days in tackling the virus. That might not have happened if the WHO had done its job. So, I think you have to make sure these organisations are doing their job effectively,” he said.

“But I don’t think that has impacted the Thai-US relationship at all. To be honest, our relationship has been very strong. We are strategic allies, with mutual bilateral relations,” he insisted.

In relation to cooperating in the development of Covid-19 vaccine, he said many countries were focusing on this issue and in Thailand, a lot of work is being done in conjunction with many international businesses. Once developed, hundreds of millions of doses will be required, so obviously that will take time and is a complicated process.

As for Thailand’s cooperation with the US Centres for Disease Control and Prevention, he said the CDC has been working with Thailand’s Public Health Ministry for over four decades and the co-director for CDC’s operation is a senior official from the ministry who took a year off to work with the CDC.

“As for the vaccine, I know that it is being tested here in conjunction with other multinational pharmaceutical companies – but our relations in the health field is incredibly strong here in Thailand, going on for almost 60 years,” he said.

When asked if Thai Airways International contacted the US Embassy to file for bankruptcy protection under chapter 11 of the US Bankruptcy court, he said the embassy was not involved.

“I have spoken to several members of the government about that and there is no need for us to get involved. The process of filing Chapter 11 in the US is well understood, and I understand that Thai Airways has hired the international US law firm Baker McKenzie to assist them both in Thailand and presumably also in the United States. I don’t think they filed in the United States yet, but I do believe the intent is to file in the US as some point in time,” he added.