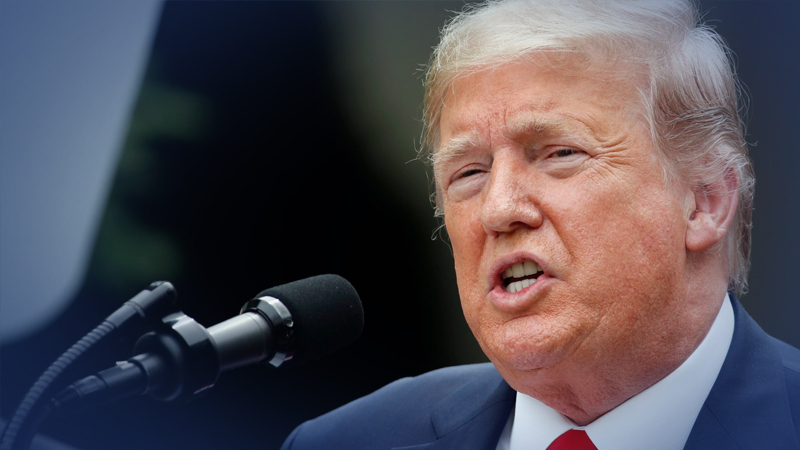 WASHINGTON - President Donald Trump on Friday leveled an extraordinary broadside at the Chinese government, accusing it of a comprehensive "pattern of misconduct" and ordered U.S. officials to begin the process of revoking Hong Kong's special status under U.S. law.

That will eventually mean that the U.S. wouldno longer treat Hong Kong and China as separate entities for the purposes of extradition, customs, trade and visa issues, he said.

In Rose Garden remarks, Trump alleged that the Chinese government covered up the coronavirus outbreak and said it instigated "a global pandemic that has cost more than 100,000 American lives and over 1 million lives worldwide." The president also attacked the World Health Organization, which he said was effectively controlled by Beijing.

"We will today be terminating our relationship" with the WHO, the president said, adding that the organization's more than $400 million annual U.S. contribution would be diverted to other health groups.

The president later issued a proclamation to protect sensitive American university research from Chinese spying and to bar an unspecified number of Chinese nationals from entering the U.S. for graduate study. He also directed an administration working group headed by Treasury Secretary Steven Mnuchinto evaluate Chinese corporations listed on U.S. financial markets as a potential target of additional restrictions.

The moves seemed certain to intensify growing U.S.-China tensions, though investors at least for now took them in stride.

But the president's comments were as notable for what he did not say. There was no mention of his irritation with China's failure to quickly purchases of American goods as required by the trade deal he signed in January and no word of any sanctions on Chinese officials. He also made no direct reference to Chinese President Xi Jinping even as he said "the world is now suffering as a result of the malfeasance of the Chinese government."

Trump's fury at China has escalated in recent weeks, as he has blamed Chinese officials for not doing more to contain the outbreak and warn the outside world of the danger. On Friday morning he tweeted simply "CHINA!"

The formal Friday announcement -- while long on harsh rhetoric -- was short on details. The president reiterated some familiar grievances, blaming the Chinese for stealing American trade secrets and jobs and assailing his predecessors for allegedly letting them get away with it.

He also expanded his indictment of the Chinese government to include Beijing's program of island construction in the South China Sea, a national security concern he rarely addresses personally.

"The Chinese government has continually violated its promises to us and so many nations," he said.

Trump also stopped short of taking concrete action against the Chinese companies that are listed on U.S. stock markets. The Securities and Exchange Commission and other regulators have complained for years about China's refusal to grant access to their companies' audit records.

As of last year, 156 Chinese companies - including 11 with significant government ownership - traded on U.S. markets, according to the U.S.-China Economic and Security Review Commission, a nonpartisan congressional body.

Trump'sannouncement followed Secretary of State Mike Pompeo's statement earlier this week that Hong Kong was no longer sufficiently autonomous from mainland China to deserve separate treatment. Under the 1997 handover agreement with the United Kingdom, China agreed to preserve the former British colony's democratic system for 50 years. Xi's decision to impose security legislation on Hong Kong directly rather than by working through the territory's local legislature may mark the collapse of that "one country, two systems" approach.

The U.S. since 1992 has treated Hong Kong as a separate jurisdiction from China for the purposes of trade, customs and visa regulations.

Some advocates of a tougher U.S. approach to China were disappointed by the president's 10-minute statement.

"They didn't do anything with regard to Hong Kong. His Hong Kong comments could have been issued as a statement a week ago," scoffed Derek Scissors, a China specialist at the American Enterprise Institute. "The administration has absolutely considered specific actions since the NPC proposal was made public but decided not to announce a single one."

Caught in the middle of the deepening U.S.-China dispute are more than 1,350 U.S. corporations with offices in Hong Kong. The erosion of the city's freedoms, including an independent judiciary, threatens to turn one of the global economy's financial centers into just another Chinese city and calls into question the rationale for such a sizable commercial presence there.

The Chinese National People's Congress, the country's rubber-stamp legislature, on Thursday approved a plan to impose national security legislation in Hong Kong. The move was denounced in a joint statement by the U.S., Canada, Australia and United Kingdom as in "direct conflict" with China's promises in 1997 when it regained sovereignty over the former British colony.

"The United States may well have to do something the market doesn't like in light of its longer term interests," said Patrick Chovanec, economic advisor for Silvercrest Asset Management in New York. "But there is concern about whether the U.S. is in a spiral of escalation with China on several fronts."

Friday's action represents only the administration's latest slap at Beijing. The president earlier this month pushed a federal retirement pension board to abandon plans to invest in Chinese securities. And the Commerce Department tightened limits on Chinese telecom giant Huawei's ability to purchase American computer chips.

Just four months after Trump celebrated a partial trade deal with China, marking an apparent truce in a two-year-long diplomatic conflict, relations between the two countries have plummeted. The president has been openly displeased with China's failure to quickly fulfill the trade deal's terms, including massive additional purchases of American crops, energy products and manufactured goods.

In recent weeks, as the human and financial toll from the coronavirus pandemic soared, the president has lashed out at China in ever sharper tones. He has blamed Chinese officials for suppressing information about the initial outbreak late last year and refusing to cooperate in efforts to investigate its origins.

"Frankly the U.S. government is - I'll use the word furious with what China has done in recent days, weeks and months, they have not behaved well and they have lost the trust I think of the whole western world," Larry Kudlow, director of the National Economic Council, said Friday on Fox News.

Lawmakers in both parties also are increasingly impatient with Beijing and the president failed to address some issues of concern on Capitol Hill. He made no reference, for example, to new legislation that requires him to impose sanctions on Chinese officials implicated in human rights violations in the Muslim-majority province of Xinjiang.

The Senate approved the legislation by unanimous consent on May 14 and sent it to the House, which approved it by a margin of 413-to-1. Under the measure, Chinese officials responsible for the torture and imprisonment of more than 1 million Uyghurs, a Turkic Muslim.

Chinese officials have denied U.S. charges of arbitrary and indefinite detention of innocent civilians, saying they are combating anti-government extremism and terror.

Trump last week delivered an ultimatum: either the WHO agrees to reforms, or the United States will withdraw within 30 days. That followed an April threat to cut off new U.S. funding to the organization over its handling of the coronavirus.

It is not clear how the President intends to "terminate" ties with the U.N. agency-or if that is even possible in the short term. But some portion of the money that the U.S. sends to the organization may be on the line.

Of the $893 million the United States sent in the 2018 and 2019 funding period, $237 million was an "assessed contribution" - a type of membership due that may prove hard to cut without congressional approval.

At greater risk is what's known as the "voluntary contribution," that is money provided to U.S. agencies for health efforts and then given to WHO programs. The largest share of this money goes to polio eradication, with large chunks to fight vaccine preventable disease, malaria, tuberculosis, HIV/AIDS and the provision of basic health care.

The prospect of cutting U.S. funding for public health issues like polio, right in the middle of the pandemic, has made Trump's proposed cuts unpopular.

Though his critique of the WHO has resonated well beyond the White House, his call to cut new U.S. funding to the organization prove wildly unpopular, earning swift criticism from foreign governments and public health experts alike.

On Twitter, former Centers for Disease Control and Prevention director Tom Frieden tweeted: "We helped create @WHO. We are part of it. It is part of the world. Turning our back on WHO makes us and the world less safe."