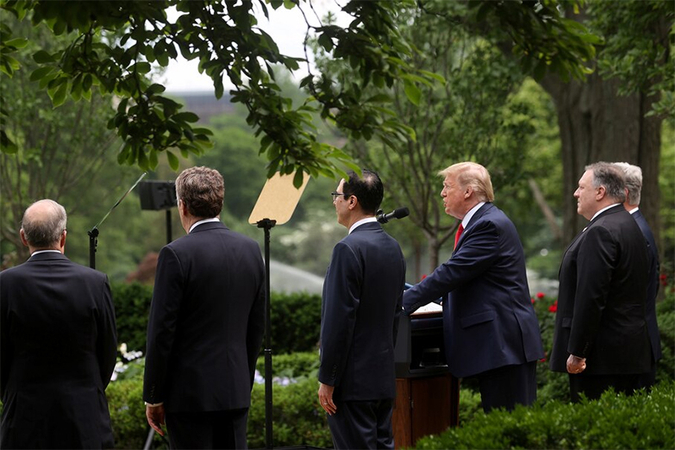 WASHINGTON - The setting was the Rose Garden. The topic was China. And for President Donald Trump, the goal of the White House event Friday was to condemn the communist nation as a threat to democratic ideals while casting himself as a defender of such values.

Yet Trump's bid to amplify his election-year criticism of Beijing's authoritarian conduct was upended even before his remarks began - drowned out by a domestic political uproar over his own positions on free expression and government transparency.

Trump's apparent suggestion, in a tweet, that law enforcement authorities would be justified in shooting protesters in Minneapolis seemed antithetical to his condemnation of Bejiing's crackdown on pro-democracy demonstrators in Hong Kong. And his growing dispute with Twitter - over the social media company's decision this week to fact-check a pair of his tweets - highlighted concerns about the president's willingness to spread misinformation, even as he blamed Chinese leaders for covering up the origins of the coronavirus pandemic.

The inherent tensions in the president's rhetoric played out awkwardly in the Rose Garden, as cable networks broadcast his remarks in a split screen with the Minneapolis protesters marching in the wake of the death of a black resident who had been brutalized by local police. Trump had billed his China announcement as a "news conference," but after delivering a 10-minute statement outlining new punitive measures, he left without taking questions from reporters - a sign that the normally loquacious president recognized that he would be asked to account for his other actions.

Foreign policy analysts said Trump risked stepping on his own message in his escalating war of words with Beijing.

Richard Fontaine, chief executive of the Center for a New American Security who served in the George W. Bush administration, said Chinese leaders would likely seek to exploit the protests, and Trump's response, as evidence to buttress their long-standing propaganda campaign that "the United States is hypocritical on the values issue and that its domestic democratic practices are flawed because they lead to unrest."

During his Rose Garden remarks, Trump called Beijing's move to exert more control over semiautonomous Hong Kong's affairs "a tragedy for the people of Hong Kong, for the people of China and indeed for the people of the world. China claims it is protecting national security but the truth is that Hong Kong was safe and prosperous as a free society. This is the reach of China's invasive state security operations into what was previously a bastion of liberty."

Trump's criticism of Beijing's efforts to stamp out months of pro-democracy protests stood in contrast to his reaction hours earlier to the Minneapolis protests. In a tweet early Friday, the president referred to the protesters as "THUGS" who were "dishonoring the memory of George Floyd," the man who died after being pinned to the ground by three police officers who arrested him while responding to an allegation of forgery.

As cable networks broadcast images of local businesses set ablaze and riot police firing tear gas into crowds, Trump wrote that he had spoken with Gov. Tim Walz, a Democrat, and told him the U.S. military "is with him all the way. Any difficulty and we will assume control but, when the looting starts, the shooting starts."

Trump's language provided Beijing with a convenient retort to U.S. pressure over the treatment of Hong Kong.

The Global Times, a Chinese state media outlet, highlighted the president's tweet in a story that suggested American leaders were operating under dangerous "double standards" in their condemnation of Beijing.

"Remember how US politicians and media called petrol-bomb-throwing mobs in Hong Kong as 'pro-democracy protesters,' " Chen Weihua, the European bureau chief of the China Daily, wrote in a tweet. "Now Trump called those anti-police-brutality protesters in Twin Cities in Minnesota as 'thugs.' "

Danny Russel, a vice president at the Asia Society who served in the Obama administration, said the Trump administration has long-since "crossed the Rubicon in terms of undercutting any credibility the United States may have had with the Chinese public about our commitment to values and to our principles."

Trump tweets and actions this week "are just gratuitous validation," said Russel, who added that a theme that runs through Trump's domestic and foreign policies "is the theme of polarization and divisiveness. It really goes back to the point that the actions Trump is taking both at home and in the China context are not aimed at solving problems - they are aimed at exploiting and in many cases exacerbating the problem. If your business model is to profit from stress and discord, you would behave in this manner."

Trump has sought to elevate China into a central issue in his 2020 reelection campaign. Under criticism over his administration's response to the pandemic, the president has sought to deflect blame onto Beijing and paint himself as willing to stand up to China.

"The world is now suffering as a result of the malfeasance of the Chinese government," Trump said in the Rose Garden, citing its attempts to "cover up" the origins of the coronavirus in the Chinese city of Wuhan.

Yet it was Trump's own tweets related to the pandemic that prompted Twitter to take its unprecedented action on Tuesday to append the fact-check labels - after he asserted, despite evidence to the contrary, that mail-in ballots, such as those being used by California to help keep the public safe from coronavirus, are likely to be "substantially fraudulent."

Trump has opposed efforts by state officials to increase voting by mail this fall, suggesting that such moves would be harmful to Republicans. On Thursday, he responded to Twitter's actions with a new executive order that attempts to target social media companies by reinterpreting a section of a 1996 law that shields websites and tech companies from lawsuits over what is published on their sites - a move that legal analysts said could be unconstitutional.

"Twitter is doing nothing about all of the lies & propaganda being put out by China or the Radical Left Democrat Party," Trump tweeted Friday. "They have targeted Republicans, Conservatives & the President of the United States. Section 230 should be revoked by Congress. Until then, it will be regulated!"

As his Rose Garden event neared, Trump appeared to recognize the self-inflicted political problems and sought to do damage control. In a pair of tweets minutes before he emerged from the West Wing, Trump said he had intended to suggest that looting in Minneapolis could lead to shooting violence among the public, not from law enforcement.

"I don't want this to happen, and that's what the expression put out last night means," Trump wrote. The expression, however, has a troubling history of police aggression in black neighborhoods.

But by then, he had given an easy opening to former vice president Joe Biden, the likely Democratic presidential nominee whom Trump has tried to paint as soft on China.

"This is no time for incendiary tweets," Biden said in his own remarks on the Minneapolis protests. "It's no time to encourage violence."