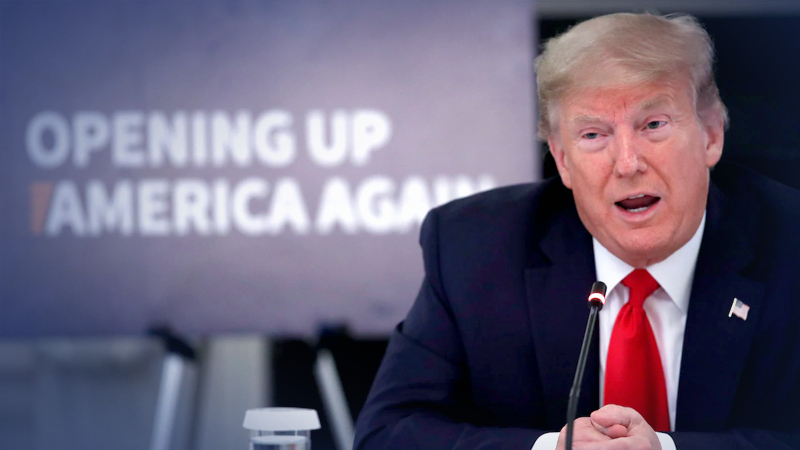 WASHINGTON - President Donald Trump is scheduled to appear next month at two in-person fundraising events for his reelection effort, resuming his fundraising activities after coronavirus restrictions halted the campaign's events since March.

Trump plans to headline a gathering at a private home in Dallas on June 11, and an outdoor event at the Trump National Golf Club in Bedminster, New Jersey, on June 13, party officials said.

Both events will be geared toward wealthy donors, charging $580,600 per couple for the Dallas event and $250,000 per person for the New Jersey event. The money will go to Trump Victory, a committee that raises money for the Trump campaign, the Republican Party and 22 state parties.

Party officials said they plan to take safety measures to ensure the health of the president and attendees. About 25 people are expected to attend each event, which is a smaller gathering than many other Trump Victory fundraisers. The events were first reported Friday by Politico.

The White House Medical Unit and U.S. Secret Service will evaluate all attendees to decide whether they can attend the event, according to a party official, speaking on the condition of anonymity to discuss security measures. Each site will be professionally cleaned and sanitized, the official said.

Attendees will be testedfor the coronavirus the day of the event, with testing costs covered by Trump Victory, the official said. All attendees must test negative to attend, complete a "wellness questionnaire" and pass a temperature screening, the official said.

The events, which are among the most expensive Trump Victory fundraisers, would inject millions of dollars into Trump's reelection coffers at a time when Joe Biden's campaign is gearing up for its own high-dollar fundraising efforts.

Trump, who has been raising money for his reelection since he became president, maintains a significant cash advantage over Biden. Trump entered May with a massive war chest of $255 million in hand, officials said.

The Biden campaign, the Democratic National Committee and a joint fundraising committee entered May with $104.5 million, records show.

Biden has a slew of online fundraising events slated to take place over the next several weeks, including events that charge up to six figures per donor.

Both Texas and New Jersey have been reopening their state's activities in phases this month.

This week, Texas expanded its reopening process by announcing that fans will be allowed at outdoor professional sporting events with limited occupancy.

New Jersey officials said this week that the state had moved "well past the peak" of the coronavirus outbreak and was "comfortably in the midst" of the state's first stage of reopening.