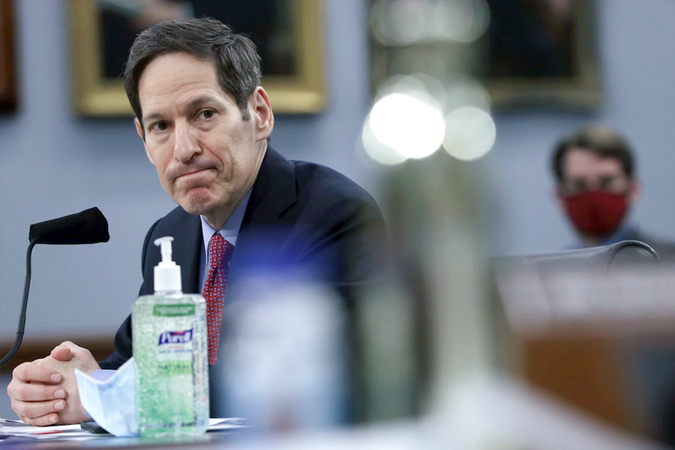 When Tom Frieden looks at the agency he once managed, he's like a former coach of a championship team watching it suffer under a domineering, impetuous team owner.

The results can be disastrous, not just for the team at the Centers for Disease Control and Prevention, which Frieden led during the Obama administration, but for a nation whose 100,000 covid-19 deaths lead the world.

Frieden, an infectious-disease physician, now is president and CEO of Resolve to Save Lives, a global public health initiative of Vital Strategies based in New York. You'd expect him to have a positive view of his 2009-2017 CDC tenure, but his praise for America's recent past during pandemics is bipartisan.

"Look at the U.S. role in HIV and malaria under George W. Bush . . .. Look at Ebola under President Obama. The U.S. was clearly the global leader," he said during an interview. "Now, with covid-19, we're a global laggard."

He doesn't blame his former CDC colleagues, he quickly adds. He's particularly critical of a Trump administration strategy that sidelines the nation's top public health agency by preventing it from communicating more directly and frequently with the public. The CDC and the White House did not respond to requests for comment.

"Public health should be first and foremost," Frieden said. "If you want to respond to a public health emergency, you need to put your public health agency front and center at the decision table and at the podium."

Instead, President Donald Trump placed himself front and center of a tardy federal response, marked by his denial, then blame-shifting, that helped give new meaning to American exceptionalism.

The federal response to the covid-19 pandemic has been exceptionally poor for a country exceptionally rich in knowledge, innovation and resources.

The United States leads the world with more than a quarter of global fatalities and has suffered more deaths than the next three countries (United Kingdom, Italy and France) combined, according to Johns Hopkins School of Medicine data. The 1.7 million U.S. coronavirus confirmed cases are just shy of the total from the next six countries, though America's population is just 55 percent of theirs.

The U.S. covid-19 death rate per capita is almost seven times the global figure and is worse than that of Belgium, Spain, the United Kingdom, Italy, France, Sweden, the Netherlands and Ireland, according to Worldometer data. The Hopkins and Worldometer numbers were as of Wednesday and are updated daily. The Worldometer figures are published by the Organization of Economic Cooperation and Development, where the United States is a member.

Governments that have publicly supported public health dictates fare better, according to Frieden. "They've had fewer cases, fewer deaths and less economic disruption," he said. "This is a public health emergency, and the response has to be led by public health."

Asked if this implies the U.S. response has not been guided by public health to the extent it should have been, "I think that's fair to say," he responded. But he won't directly criticize Trump by name or characterize his pandemic leadership, saying, "I'm a doctor, not a politician."

In contrast, Frieden has high praise for Nancy Messonnier, director of CDC's National Center for Immunization and Respiratory Diseases, who drew Trump's ire and right-wing fire for telling the truth. Her early and repeated warnings about the potential devastation of covid-19 were bad news the president didn't want.

Had her words and those of other experts guided the administration's early response, perhaps more people would be alive. "It's possible that actions would have been taken sooner," Frieden said, "and we could have had less disruption to our everyday lives."

He is particularly upset at the lack of CDC media briefings during a period when its leadership is needed most. That, he said "is quite frankly, a scandal. And it reflects not on the CDC. It reflects on the administration. These are the world's best health professionals. They're paid for by American taxpayers. American taxpayers trust them and . . . I can only conclude that they're not being allowed to speak right now.''

Unlike some countries that began producing coronavirus test kits in January, the United States was late to the game and, Frieden said, "really didn't have a focused response."

But the nation's poor record in the covid-19 fight reflects more than the administration's response. The high rate of black death again exposed a public health system long marred by racial bias.

The nation's high degree of chronic ailments increases the risk of severe illness during a pandemic. The fragmented U.S. health system means it's more difficult to implement consistent policies. The 4 million Americans Frieden said are in institutions like nursing homes, homeless shelters and prisons are in greater risk.

Until now, the United States and the CDC in particular have enjoyed an international reputation as the leader in the global fight to advance public health. But with the coronavirus, "the absence of U.S. leadership here has been disappointing," Frieden lamented. "One would have hoped it would have been different."