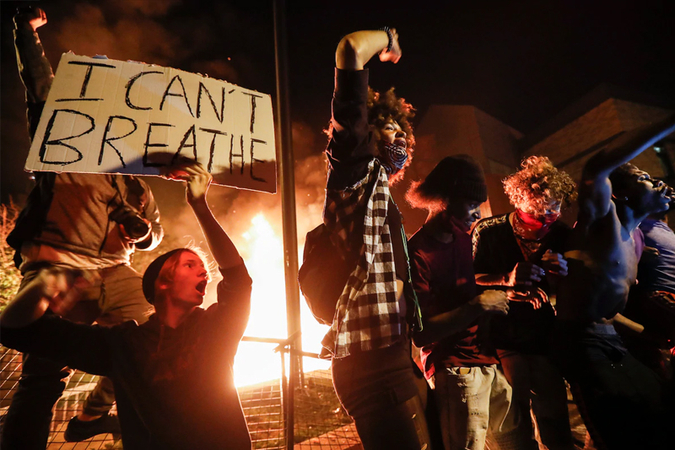 LONDON - Millions of people around the world watched footage filmed Monday of a white Minneapolis police officer kneeling on the neck of George Floyd, a 46-year-old black man, as he cried out that he couldn't breathe. He later died.

The video, and scenes from the chaotic protests against police brutality that unfolded over the ensuing week, found purchase and provoked responses across the globe.

Progressives took the opportunity to express solidarity with marginalized communities in the United States. And leaders accused of human rights abuses sought to deflect attention toward America.

Canadian Prime Minister Justin Trudeau ended a coronavirus news conference on Friday morning by addressing the Canadians who are watching "the news out of the United States with shock and horror."

"Racism is real. It's in the United States, but it's also in Canada," he said. "We know people are facing systemic discrimination, unconscious bias and anti-black racism every day."

Trudeau called on Canadians to stand up against discrimination and to understand "just how deeply people are being affected" by the news out of Minnesota.

In Britain, lawmaker Claudia Webbe urged Britons to "show solidarity" with George Floyd's community and loved ones in the wake of his death.

"We cannot ignore yet another death of a Black man in police custody. This is how racism works; the regulation and control of Black people," she tweeted, along with the hashtag #blacklivesmatter.

Labour lawmaker David Lammy, also of the Labour Party, described footage of the arrest as "terrifying."

BBC radio presenter David Whitely shared his thoughts on the case in an Instagram video, titled "Can we be angry?"

"When I see that a man has put his knee on a black man's neck it feels like I've been hit," he said, in the recording that has since been viewed more than half a million times. "I keep seeing my people hit and when I see them hit it makes me angry and it makes me irate," he said, adding "there's no sense of justice."

On Friday morning, video footage of CNN correspondent Omar Jimenez and his camera crew being arrested by police as they reported live from the Minneapolis protests swiftly started trending on social media as thousands expressed outrage, calling the scene "unbelievable" and demanding he be released.

"Journalists all around the world must be free to do their job and hold authorities to account without fear of retribution," Britain's Foreign Office said in response to the incident.

Leaders who often come under criticism from the U.S. government or U.S.-based human rights groups were quick to seize on the moment.

Turkish President Recep Tayyip Erdoğan said a "racist and fascist" approach led to Floyd's killing and called for the perpetrators to be brought to justice. "We will be monitoring the issue," he tweeted.

On his English-language Twitter account, Iran's Supreme Leader Ayatollah Ali Khamenei retweeted a tweet that read, "If you're dark-skinned walking in the US, you can't be sure you'll be alive in the next few minutes."

"The images are tragically familiar," read an article in Le Monde. "The death of an African-American at the hands of the police; demonstrations of anger that turn into riots; the mobilization of the National Guard."

The article called the events a "bloody routine" linked to large numbers of people killed at the hands of police in the United States each year.

The online edition of Die Zeit, a prominent center-left weekly newspaper in Germany, published an opinion piece Friday headlined "Violence is his solution," which described Trump as racist and accused him of "dropping the pretense of empathy."

Norway's Princess Märtha Louise also took to social media to condemn Floyd's death, sharing a photograph of a woman holding a sign that read "George Floyd's life mattered." In the post, she called out the actions of the officers involved, deeming them "monsters" and urged people to "wake up and stop the inhumanity."

Michelle Bachelet, the former president of Chile who now serves as the high commissioner for human rights at the United Nations, urged the United States this week to take "serious action" to pursue justice and stop a cycle of violent killings of black Americans.

"I am dismayed to have to add George Floyd's name to that of Breonna Taylor, Eric Garner, Michael Brown and many other unarmed African Americans who have died over the years at the hands of the police - as well as people such as Ahmaud Arbery and Trayvon Martin who were killed by armed members of the public," she said in a statement. "Procedures must change, prevention systems must be put in place, and above all police officers who resort to excessive use of force, should be charged and convicted for the crimes committed."