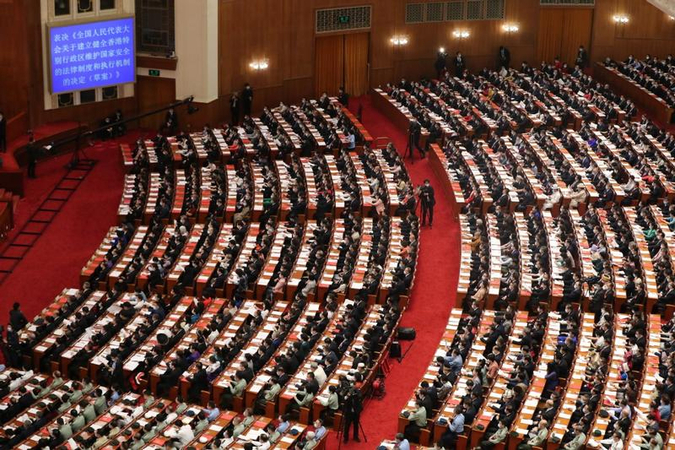 National People's Congress (NPC) deputies attending the closing meeting of the third session of the 13th NPC vote on the NPC Decision on Establishing and Improving the Legal System and Enforcement Mechanisms for the Hong Kong Special Administrative Region to Safeguard National Security. In Beijing, on May 28, 2020. (WANG JING / CHINA DAILY)

HONG KONG - The Hong Kong Special Administrative Region Government (HKSAR) warned Washington that withdrawing its special US status, which has underpinned the city as a global financial hub, could be a “double-edged sword” and urged the United States to stop interfering in its internal affairs.

“Any sanctions are a double-edged sword that will not only harm the interests of Hong Kong but also significantly those of the US,” a HKSAR government spokesperson said in a press release issued late Thursday after the National People's Congress (NPC) adopted a decision to make a public security law for Hong Kong.

"The threat of sanctions to achieve the purpose of interfering with the policy of another place is a violation of international law and international practice," reads the press release in which the government also emphasized on the city's "separate customs territory" status.

An HKSAR government spokesperson pointed out in the press release that Hong Kong's "separate customs territory" status is enshrined in the Basic Law and that the city will continue to pursue its policy of free trade.

"As a separate member of the World Trade Organization, we expect to be fairly treated by our trading partners," the spokesperson said in a statement.

The HKSAR government reminded the US that in the past decade, its trade surplus with Hong Kong had been the biggest among all its trading partners, with merchandise trade surplus totaling US$297 billion from 2009 to 2018.

"In 2019, that surplus had come down from US$31.4 billion in the preceding year to US$26.4 billion as a result of the US—China trade tensions. Should any sanctions be contemplated in other areas like services and investment, the interests of the 1,300 US corporations based in Hong Kong might further be affected," the HK government warned.

The Liaison Office of the Central People's Government in the HKSAR said Friday that it firmly supports the HKSAR Chief Executive Carrie Lam and the HKSAR government in assuming the responsibility of safeguarding national security, bringing peace back to Hong Kong at an early date, and refocusing on the economic development and improvement of people's livelihood.

A spokesperson for the office said the National People's Congress (NPC)'s adoption of a decision to introduce national security legislation in Hong Kong has received strong support from various sectors of Hong Kong.

In a statement, Lam has welcomed the adoption and pointed out that the HKSAR government will fully cooperate with the Standing Committee of the NPC to complete the relevant work on legislation as soon as possible, and the HKSAR still has the legal responsibility to enact legislation in accordance with Article 23 of the Basic Law.

In a letter to all residents in Hong Kong, Lam pointed out that Hong Kong has become a gaping hole in national security, putting Hong Kong's prosperity and stability at risk, and the objective of the legislation is to protect the overwhelming majority of residents, and to sanction activities that endanger national security and curb interference by foreign and external forces in the affairs of the HKSAR.

The spokesperson said the remarks of Lam reflects that she actively shoulders the responsibility to both Hong Kong and the nation and firmly supported the HKSAR government in fully cooperating with the Standing Committee of the NPC to complete the relevant work and safeguarding national security and Hong Kong.

As the United States made wanton remarks on, distorted and smeared Hong Kong affairs and threatened to use sanctions, the HKSAR government responded immediately and urged the United States to bear in mind its own interests in Hong Kong, and to stop interfering in the internal affairs of Hong Kong and China at large.

The spokesperson said that the office firmly supports the HKSAR government and opposes interference by the United States and its smears on the legislation, urging the United States to stop relevant acts immediately.

The spokesperson said the Chinese government is firmly resolved to safeguard its national sovereignty, security and development interests, implement the "one country, two systems" principle, and oppose external interference in Hong Kong affairs.

The spokesperson said the legislation will provide the necessary mechanism guarantee for Hong Kong to get rid of the hardship and achieve long-term development and Hong Kong will definitely start again with the leadership of Lam and concerted efforts of the HKSAR government and various sectors of Hong Kong.