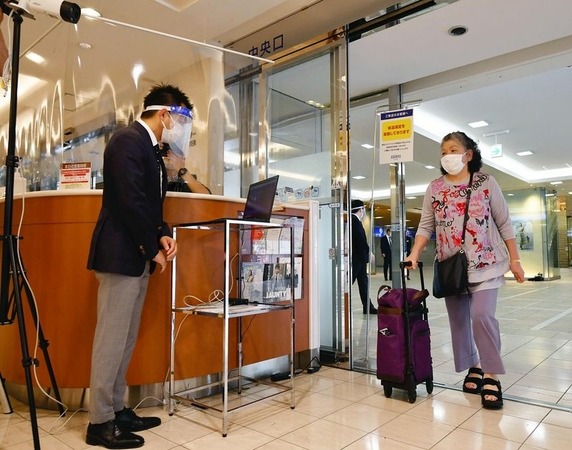 A shopper enters a department store with virus-prevention shields in place after the state of emergency was lifted. [The Yomiuri Shimbun]

The government on Thursday released its monthly economic report for May, describing the Japanese economy as “worsening rapidly in an extremely severe situation” due to the spread of the novel coronavirus.

It kept unchanged its assessment for April, which said the economy was “getting worse” for the first time in 10 years and 11 months, since May 2009, when the U.S. investment bank Lehman Brothers collapsed.

By category, exports were revised downward for the second straight month. The decline reflected a drop in overseas demand due to lockdowns mainly in Europe and the United States.

The employment situation was revised downward for the third straight month. The number of active job openings in May fell 26% from a year earlier, widening the loss from April’s 21%.

The government maintained its view of private consumption, industrial production and corporate profits being severe.

As for imports, the government revised its assessment upward for the first time since December 2017, noting that imports have been leveling off recently, although effects of the virus outbreak remain. The government believes that the resumption of economic activities in China has restored distribution functions.

As for overseas economies, the report said the situation continues to deteriorate rapidly and is extremely severe. The report maintained the view that economies in the United States and the eurozone are in an extremely severe situation, while lowering its assessment for emerging economies.

Following the government’s lifting of the state of emergency imposed to contain the spread of the coronavirus outbreak, economic activity across the country has been gradually resuming. However, the report concludes that “an extremely severe situation is expected to remain due to the influence of the infectious disease for the time being.”

At a press conference on Thursday, Yasutoshi Nishimura, the minister in charge of economic revitalization, said, “It is necessary to watch carefully while recognizing the risks of a second and third possible outbreak.”