Protesters pray outside the Hennepin County Government Center in Minneapolis. Demonstrations took place across the country this week after the death of George Floyd, a black man who had been pinned to the ground by a police officer kneeling on his neck. MUST CREDIT: Photo by Joshua Lott for The Washington Post

A global pandemic has now killed more than 100,000 Americans and left 40 million unemployed in its wake. Protests - some of them violent - have once again erupted in spots across the country over police killings of black Americans.

President Donald Trump, meanwhile, is waging a war against Twitter, attacking his political rivals, criticizing a voting practice he himself uses and suggesting that looters could be shot.

America's persistent political dysfunction and racial inequality were laid bare this week, as the coronavirus death toll hit a tragic new milestone and as the country was served yet another reminder of how black people are killed by law enforcement in disproportionately high numbers. Together, the events present a grim tableau of a nation in crisis - one seared by violence against its citizens, plagued by a deadly disease that remains uncontained and rattled by a devastating blow to its economy.

"The threads of our civic life could start unraveling, because everybody's living in a tinderbox," said historian and Rice University professor Douglas Brinkley.

Barbara Ransby, a historian at the University of Illinois at Chicago and a longtime political activist, said the toll of the coronavirus outbreak made long-standing racial inequities newly stark. Then, images of police violence made those same disparities visceral.

"People are seething about all kinds of things," said Ransby, the author of "Making All Black Lives Matter: Reimagining Freedom in the Twenty-First Century." "There are major turning points and ruptures in history. . . . This is one of these moments, but we've not seen how it will fully play out."

In the days after a 46-year-old black man died in the custody of Minneapolis police in an incident caught on video, demonstrators took to the streets. In that city, a police precinct was breached and set ablaze, along with other businesses. In Colorado, shots were fired near the statehouse. At a protest in Louisville, seven people were shot.

Authorities announced charges against the officer in the Minneapolis case Friday - which observers saw as a development that might quell some of the unrest.

Some said the tumult, set in the broader context of the twin health and economic emergencies, could mark a rupture as dramatic as signature turning points in the country's history, from the economic dislocation of the Great Depression to the social convulsions of 1968. Others were skeptical that a fundamental change was at hand. 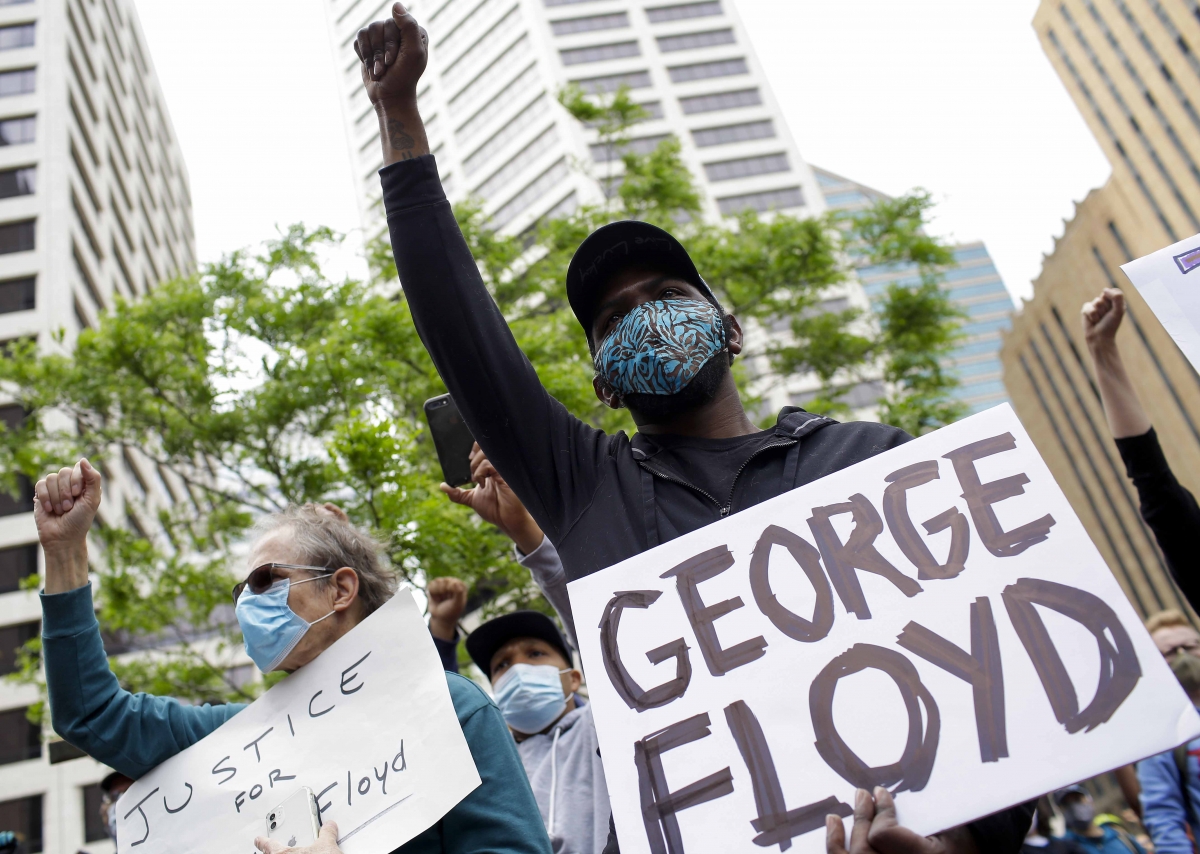 Eric Foner, a historian at Columbia University, said the past is filled with events whose outcomes have not been as sweeping as they seemed to portend. He pointed to examples as disparate as the European revolutions of 1848 - famously said to be the "turning point at which modern history failed to turn" - and Hurricane Katrina in 2005, which exposed lethal failures but did not cause political transformation.

"There seems to be a very powerful inertia pushing us back to normal," Foner said. "I'm skeptical of those who think this coronavirus is going to change everything."

It was only in February that the Senate voted to acquit Trump after he became the third president in U.S. history to be impeached. The next month, much of American business and social activity shut down in an attempt to stem the spread of the novel coronavirus. The country has just now begun to reopen, with culture wars raging over how and when it is safe and appropriate to do so.

Then, this week, Minneapolis police officer Derek Chauvin pressed his knee into the neck of a handcuffed black man, pinning him to the ground. George Floyd died. His cries of "I can't breathe" quickly rocketed around the world.

The protests that erupted in Minnesota spread to places like Columbus, Phoenix, Denver and Louisville, which recently experienced a controversial police killing when officers serving a warrant shot and killed a 26-year-old EMT inside her home. More demonstrations broke out Friday evening across the country, including in the District.

Floyd's death followed the slaying of a black man, Ahmaud Arbery, who was jogging in Georgia, and a viral dust-up in New York's Central Park when a white woman called the police on a black man there to bird-watch. Both incidents also were captured on video.

"I was amazed watching people who were out," said Raoul Cunningham, head of the NAACP branch in Louisville. "To me, it made clear that we're at a period of time like we've never faced before."

A president's impeachment, demonstrations over police killings and even global pandemics all have precedents. But their confluence in such a short span of time - under this president, who consistently pushes the boundaries of historic norms associated with his office - has exacerbated the nation's sense of unease.

"It's natural to wish for life to 'just get back to normal' as a pandemic and economic crisis upend everything around us," former president Barack Obama said in a statement. "But we have to remember that for millions of Americans, being treated differently on account of race is tragically, painfully, maddeningly 'normal' - whether it's while dealing with the health care system, or interacting with the criminal justice system, or jogging down the street, or just watching birds in a park."

Trump responded to the latest crisis Friday as he often does: by lashing out. In a tweet that Twitter labeled as violating its rules meant to stem the glorification of violence, the president attacked Minneapolis's mayor, a Democrat; labeled the protesters "THUGS"; and vowed to send in the National Guard.

"Any difficulty and we will assume control but, when the looting starts, the shooting starts," he wrote, appearing to echo a warning issued more than 50 years ago by Miami's police chief amid unrest that gripped blacked neighborhoods there.

Trump later sought to clarify that he did not "want" looters to be shot. "It was spoken as a fact, not as a statement," he said.

Former vice president Joe Biden, the presumptive Democratic presidential nominee, took a veiled shot at the president, saying in a video address that this was "no time to encourage violence." He said he had spoken with Floyd's family and called on Americans to confront the nation's history of racial injustice.

"The original sin of this country still stains our nation today," Biden said. "And sometimes we manage to overlook it. We just push forward with a thousand other tasks in our daily life. But it's always there. And weeks like this, we see it plainly that we're a country with an open wound."

In Minnesota, some local officials acknowledged that the demonstrations - at least before the charges were announced - seemed to be spiraling beyond their control. Police at one point took a CNN correspondent and crew into custody on live TV, though they were later released. Minnesota Gov. Tim Walz, a Democrat, said in an emotional news conference that the unrest was a result of "generations of pain, of anguish" over racism in policing.

Hodan Hassan, a state lawmaker who represents part of the district engulfed in flames this week, said the devastation visited on businesses there will only deepen the economic pain familiar to south Minneapolis - and now spreading across the country in the pandemic's wake. "This community was struggling because of years of disinvestment," she said. "And then the pandemic came. And to add fuel to the fire, now this is happening. It feels like we can't catch a break."

Ben Crump, a lawyer for Floyd's family, said in a statement that Chauvin's arrest was "welcome," but that the family expected more serious charges and also wanted other officers at the scene to be taken into custody.

"The pain that the black community feels over this murder and what it reflects about the treatment of black people in America is raw and is spilling out onto streets across America," Crump said.

Brinkley, the Rice University historian, said the moment seemed akin to Richard Nixon's presidency, when the country was divided politically over the Vietnam War and the president was attacking the press over the Pentagon Papers.

Trump, he said, seems to see the unrest as a potentially helpful "political issue," if he can position himself as a law-and-order candidate cracking down on anarchy and possibly distract from the pandemic. A Washington Post national average of polls in May shows Trump trailing Biden by seven points, 42 percent to 49 percent.

"It seems like many of the institutions that we have relied on to check government power have been weakened considerably over the last few years," he said. "Norms that we took for granted have been eroded. And at a time when what is most needed is thoughtful, calm, deliberate leadership, we have the opposite."