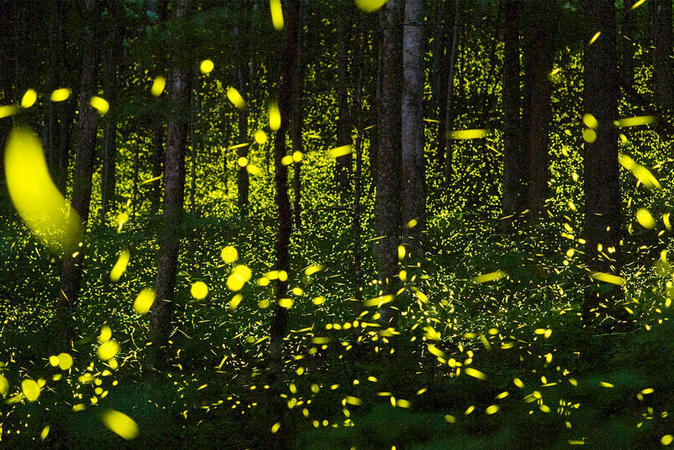 It begins with a few quick electric-yellow flashes at dusk, followed by about eight seconds of darkness. Then more flashes, and more darkness. As the night wears on, the blinking builds until hundreds of thousands of fireflies flicker their lamps in unison, then douse their bioluminescent flames and usher the forest back into black. A few long moments later, the whole silent spectacle starts anew.

This is what's known as "the light show," a once-a-year courtship display by the synchronous firefly formally named Photinus carolinus. And each year in late May and early June, people travel from all over the world to Tennessee's Great Smoky Mountains National Park to see it. Attendance is so coveted that visitors have to win a lottery just for the privilege of watching fireflies flirt with each other.

"On a peak night, it could be up to around 1,200 people," said Becky Nichols, an entomologist at the park.

That's how it used to work, at least. This year, out of coronavirus-related caution, the National Park Service canceled the event, closed the nearest campground to the fireflies' display area and barricaded the road that leads to it. It's the first time since the 1990s that the lightning bugs will perform without a paparazzi-level audience.

The closure will no doubt disappoint people who planned summer vacations around the annual lightning bug ritual - but it might not dismay the fireflies. Some scientists say the absence of human hordes could be a blessing for the bioluminescent beetles.

"Everybody loves fireflies," said Sara Lewis, an entomologist who specializes in lightning bugs at Tufts University. But the insects, she added "might be breathing a huge sigh of relief that they get a year to recover and do their whole mating dance behind closed doors, so to speak. Nobody's watching them this year."

Increasingly, Lewis and other scientists have started to warn about the dark side of firefly tourism in the Smokies and other less-famous locales - a business that now accounts for some 200,000 visitors globally each year. For one thing, with people comes artificial light. From vehicle headlights and camp lanterns to flash photography and smartphone screens, all those extra photons make it more difficult for lightning bugs to attract and recognize mates - the reason fireflies flash in the first place.

More people in the woods also means more accidental trampling of fireflies at a critical juncture in their lives. Before one of these beetles can turn into the hovering firework that heralds the arrival of summer, it spends a year or two as a larva burrowing through the dirt and leaflitter. In some species, such as the blue ghosts that also inhabit the Smokies, adult females lack wings entirely, making them vulnerable to squashing by the very tourists there to appreciate the bugs' beauty.

While the Smokies firefly extravaganza is on pause, other areas of the national park reopened on May 9. Almost immediately, a report emerged of visitors willfully ignoring barriers set up by park staff to ensure proper social distancing. Even so, the park opened more trails and scenic overviews later in the month. Second lady Karen Pence even stopped by for a visit.

Before people could return en masse, firefly researcher Lynn Faust said she made several trips to the synchronous firefly area known as Elkmont to check data loggers that collect hourly temperature readings above and below ground. Together with a mathematical formula, the readings allow scientists to predict when the beetles will emerge. Faust called the experience of being virtually alone in half a million acres of wilderness "mind-blowing."

"I felt so lucky," said Faust, author of "Fireflies, Glow-worms, and Lightning Bugs." "It crossed my mind that maybe all parks should be given a several-month holiday every year from the people."

Similar scenes are playing out across the world, Lewis said. In South Carolina, Congaree National Park called off its 2020 Fireflies Festival, as did the not-for-profit that organizes the PA Firefly Festival near Tionesta, Pennsylvania. In India, the Festival Of A Million Fireflies was canceled for the first time since it began in 2007. If you try to book a firefly boat tour in Malaysia or Thailand, you'll find that most outfits are closed due to restrictions placed on international travelers.

This is devastating to people who work in the tourism industry, said Lewis, because tour operators in such places work year-round ferrying visitors up and down the rivers where the native lightning bug species have evolved to do their flashing. "All those people are out of work," she said.

But for the insects, the coronavirus closures may well lead to a baby boom.

With fewer humans around - and fewer wafts of their bug sprays and rays of their lightbulbs - it's possible more lightning bugs will show up than ever before, said Raphael Sarfati, a postdoctoral researcher at the University of Colorado-Boulder. That could lead to more fireflies next year and the year after.

But Sarfati is quick to add that many other variables affect firefly numbers, such as temperature and moisture. Also, he's a physicist, not a firefly expert.

In recent weeks, Sarfati and his colleagues have been traveling around the United States filming firefly displays with 360-degree cameras to calculate how many insects are in a given area. While the project is only in its second year, it could provide scientists with a method for quantifying and keeping tabs on lightning bug populations. He now hopes the pandemic will allow the team to capture how the annual displays may differ under conditions no firefly researcher has ever witnessed before.

"With our recordings, we're hoping to maybe make some sense of what actually happens there," said Sarfati, who will be one of the few people to witness the light show in the Smokies this year.

Nichols, the Smokies' resident entomologist, said she doesn't expect any difference in firefly numbers this year. She also said Elkmont's fireflies don't seem to have declined over the years, unlike in other areas, where population drops have been attributed to habitat loss, light pollution, and pesticides.

"We have refined our program over the years, trying to make sure that there's no resource damage," said Nichols. This includes keeping people on trails and out of the woods, enforcing bans on the use of white lights and limiting how many people can be on the trail at once by operating a shuttle service from park headquarters.

But if there is a noticeable difference this year, Nichols said, the park will take note of it and adjust next year's viewing plans accordingly.

Even with organized events called off, Lewis said now is the perfect time for people all over the United States to get out and enjoy the more than 150 species of native fireflies.

"Here's an opportunity for people who are stuck at home and can't or don't want to travel," she said. "They could go out in their backyard or walk down the road on a dark night to their neighborhood park, set up a chair, stay socially distant from their neighbors, and everybody can enjoy their local fireflies."

"They're no less spectacular when they're close to home," said Lewis.