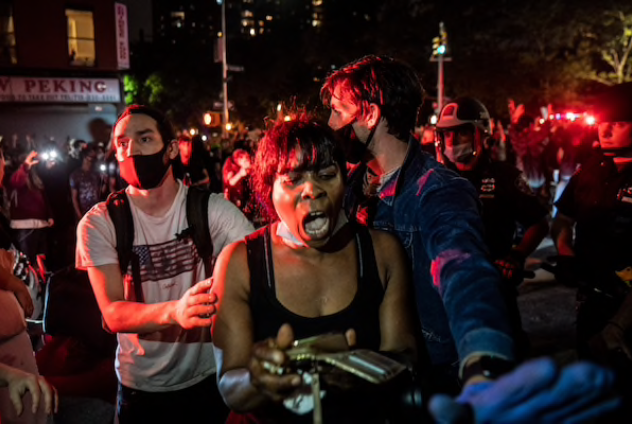 On Friday night, protesters took to the streets in Brooklyn near the 88th Police Department Precinct in New York. MUST CREDIT: Washington Post photo by Jabin Botsford

The United States edged closer to nationwide upheaval on Saturday as protests gained force from coast to coast, and as authorities steeled themselves for another night of unrest over the death of George Floyd.

The killing of the 46-year-old black man in police custody has ignited furor as Americans marked the grim milestone of 100,000 lives lost to the novel coronavirus. Video of the fatal encounter in Minneapolis brought crowds rushing back to the streets after weeks of stay-at-home restrictions, in a return marked by spasms of violence that further frayed the social fabric of a country beset by twin health and economic emergencies. 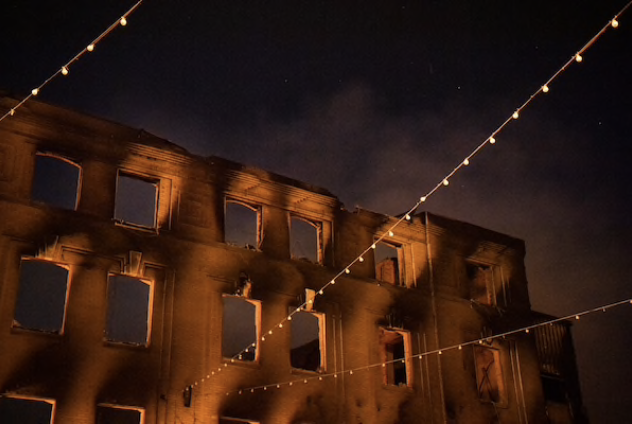 The spiraling street protests recalled recent activism by the Black Lives Matter movement, while also evoking signature moments in the turbulent history of racial and economic struggle, from the convulsions of 1968 to the riots that broke out in Los Angeles in response to the April 1992 acquittal of the officers charged in the beating of Rodney King. Ongoing eruptions had yet to reach these levels, as mayors and governors beseeched their citizens to stay calm, while President Donald Trump urged authorities to "get tougher."

"People are fighting for their lives," said Rashad Robinson, the president of the racial justice group Color of Change.

At the epicenter of the national anguish, Minnesota Gov. Tim Walz, a Democrat, mobilized his state's entire National Guard for the first time. Bracing for a fifth night of violence and riots, he warned that the destruction of past nights could be "dwarfed" by events on Saturday night. Governors in other states also activated National Guard units. The Trump administration offered active-duty military forces to help quell the unrest, as the president escalated his rhetoric against protesters, tweeting about the "unlimited power" of the military and the prospect of "many arrests."

The threat did not deter multigenerational and multiracial crowds from thronging cities throughout much of the day. The White House itself became a flash point, as demonstrators clashed with Secret Service officers outside the president's residence.

The same anger that caused demonstrators to seek to breach a barrier erected on Pennsylvania Avenue seized many other metropolitan areas.

In Austin, protesters took over Interstate 35, freighted with symbolism because it cuts the city along racial and economic lines. In Denver, hundreds laid down in front of the state Capitol for nine minutes - the length of time Floyd's neck was pinned under an officer's knee - chanting, "I can't breathe!"

Some took to the streets in Chicago near the Trump hotel, where clashes with police at times turned violent. Trump Tower in Manhattan also became a magnet for protesters who fanned out across New York City in mostly peaceful displays punctuated by scuffles with police.

And a peaceful demonstration outside city hall in Philadelphia gave way to havoc, as police vehicles were set ablaze and protesters attempted to topple a statue of Frank Rizzo, a former mayor and police commissioner reviled by some because of his aggressive law enforcement tactics.

Kelsey Broll, 26, said the chaos deepened when the crowd became too large for protesters to hear instructions from local organizers from the Black Lives Matter movement. They were drowned out, too, as police set off what appeared to be sound grenades and tear gas, she said, and as protesters threw bricks into the windows of banks.

"I'm not condoning violence, but I think we need to band together to show the people in power that we're not just going to let them slide," Broll said. "I'm very sick of what's going on."

She noted that protesters were taking an added risk because the city's stay-at-home order, designed to curb the spread of the coronavirus, is active through Thursday.

Dueling accounts emerged of the identities and motivations of the protesters, as Attorney General William Barr echoed Trump in blaming "extremist groups using Antifa-like tactics," while officials in Minnesota said organized white supremacists might have infiltrated the protests to sow chaos.

State officials instituted new curfews in metro areas including Philadelphia, Cincinnati, Louisville and Portland, Oregon, after the weekend opened in nearly 20 U.S. cities with destruction and arrests. Overnight, protesters repeatedly clashed with police who, in some cases, used pepper spray and rubber bullets to quell crowds. Demonstrators responded by chanting "I can't breathe," spray-painting "Black Lives Matter" on buildings and closing off roads to demonstrate against police brutality.

In Portland, protesters smashed windows of businesses, including a Starbucks and an Apple store, and stole merchandise from a closed mall. In Atlanta, CNN headquarters was vandalized. In Cincinnati, business were ransacked, dumpsters were set ablaze and two police officers were injured in skirmishes with protesters. In Detroit, a 21-year-old was killed in a drive-by shooting where protests were taking place.

Minneapolis Mayor Jacob Frey, a Democrat, said protests once driven by the community's grief over Floyd's death had been hijacked by people taking advantage of the discord. "This is no longer about verbal expression," he said. "This is about violence, and we need to make sure that it stops."

In remarks at the Justice Department, Barr threatened to prosecute anyone who crossed state lines to riot.

Barr did not offer evidence for his assertion, while a Justice Department spokeswoman later said his remarks were based on "information given to us by state and local law enforcement."

Minnesota officials, meanwhile, said they were investigating whether white supremacists from out of state had infiltrated the demonstrations. But arrest records since Friday in the county where Minneapolis is located show a vast majority of those who were taken into custody are from Minnesota.

Of the 57 people arrested in protest-related incidents through Saturday morning, 47 provided a Minnesota address to authorities, said Jeremy Zoss, a spokesman for the Hennepin County Sheriff's Office. Most of them provided addresses from Minneapolis and St. Paul, according to data provided to The Washington Post. The 10 other arrests were of people from other states or the state wasn't provided, Zoss said.

There was no data on 10 percent of other arrests, Zoss said. Arrest data itself does not provide conclusive evidence of the demographics of thousands of demonstrators, and it is unclear if any people provided false addresses

Trump, who spent much of Saturday tweeting about the protests, spoke briefly to reporters before leaving for Florida for the SpaceX launch. After proclaiming in a tweet that Saturday was "MAGA night" at the White House, seeming to anticipate chaos in the heart of Washington, he denied inciting violence, saying, "I was just asking, but I have no idea if they're going to be here."

Stanislav Vysotsky, a sociologist at the University of Wisconsin at Whitewater, said laying blame on outside agitators, in the absence of more convincing evidence, served to "distract from the underlying issues, which are people's frustrations with a number of different structural conditions that begin with police violence against people of color."

"Add to that the economic inequality exacerbated by covid-19, and long-simmering anger becomes explosive," he said. Antifa in particular, he said, had become "a convenient symbol and way to delegitimize protest by aligning it with what's seen as antisocial violent crime."

So far, Vysotsky said, he had only seen anecdotal evidence of some far-right advocates for a race war mobilizing in Minneapolis, but local protesters had largely been able to "identify them and keep them at arm's length."

Robinson, of Color of Change, said there were legitimate questions about the composition of the protests.

"We're seeing some forces who have nothing to do with what we're working for or fighting for," he said.

At the same time, he welcomed new faces to the fold, saying activism in recent years has successfully created new allies.

Arielle Cole, 31, was living in Ferguson, Missouri, when Michael Brown was shot in 2014 but was reluctant to participate in the protest because she was afraid how it would reflect on her nondenominational Christian church. Now a community specialist with the Missouri Department of Mental Health, she returned to Ferguson to protest outside its police station on Saturday night.

For Horatio Gonzalez, 22, and Xitlalic Rosa, 23, Saturday was the first protest they ever attended. They traveled across the state line and into Chicago from East Chicago, Indiana, because, as Gonzalez said: "I'm fed up. It's time."