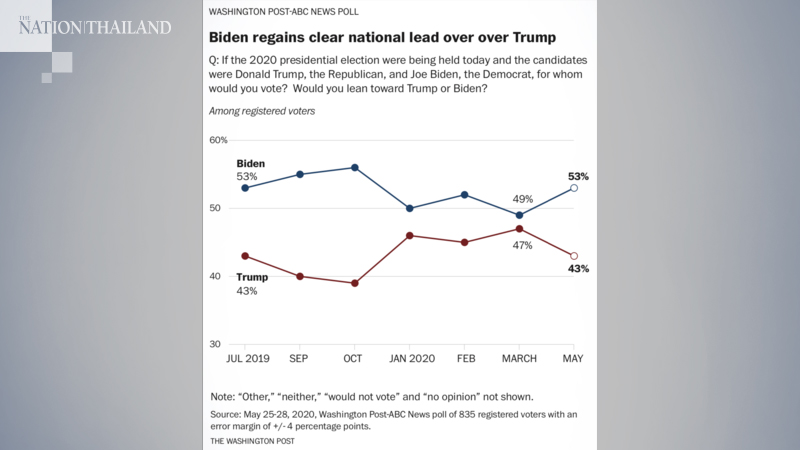 Americans give President Donald Trump negative ratings for his handling of the coronavirus pandemic, and as the crisis has persisted his prospects for reelection in November have eroded, with former vice president Joe Biden now holding a clear lead nationally, according to a Washington Post-ABC News poll.

Overall, Americans offer mixed assessments of Trump and Biden, and although the presumptive Democratic nominee is viewed less favorably overall today than he was last fall, he fares better than the president on several personal attributes. At the same time, Trump's supporters are notably more enthusiastic and committed to voting for him in the fall than are those who currently back Biden.

Biden leads Trump 53 percent to 43 percent among registered voters nationally. That 10 percentage-point margin compares with what was a virtual dead heat between the two candidates two months ago, when Biden was at 49 percent and Trump 47 percent. Among all adults, Biden's margin widens to 13 points (53 percent to 40 percent).

Against a rapidly changing backdrop - with the coronavirus far from contained, the prospects for the economy remaining rocky as many businesses begin to reopen and violence convulsing cities across the nation - the poll captures the moment. But it is not predictive as to the political fallout and implications for November, especially given the possible disparity between the popular vote and the electoral college results as was the case in 2016.

When a Biden-Trump contest is filtered only through those who currently say they are certain to vote, the former vice president's margin is cut in half (51-46 percent). That highlights the significance of efforts by both campaigns to register and turn out every possible supporter and heightens the ongoing debate over whether states should make voting by mail easier, which Trump opposes even as his party has promoted it as a tool.

On the question of making voting by mail easier, 87 percent of Democrats and 67 percent of independents favor such moves by the states, while 61 percent of Republicans oppose such changes, including 53 percent who say they are strongly opposed. Overall, 65 percent of adults express support.

As they think about the problems the next president will inherit, Americans are evenly divided over whether Trump or Biden is better equipped to manage a recovery of the battered economy (47 percent each), while Biden is favored over Trump as the leader to manage efforts to control the spread of the virus (50 percent to 42 percent).

The decline is also evident in assessments of Trump's handling of the coronavirus crisis. Two months ago, as the nation was beginning to shutter itself to halt the spread of the virus, he was in positive territory, 51 percent to 45 percent. Today he has slipped to 46 percent approving and 53 percent disapproving.

Trump's stronger ratings in March were fueled in part by improved standing among some Democratic-leaning groups, some swing voters and also among women, signs of a rally effect that past presidents have experienced during national crises. That support has now receded, both on his handling of the pandemic and his overall rating. Among women, for example, approval on Trump's handling of the virus has moved from an even split in March (48 percent to 48 percent disapproval) to significantly negative now (39 percent positive to 59 percent negative).

On the economy, the president's ratings are still in positive territory, at 52 percent of Americans approving and 44 percent disapproving. But that also reflects slippage since March, when he was net positive by 19 points.

At a time when more than 40 million people have applied for unemployment insurance, the jobless rate in April was 14.7 percent and some small businesses have been closed permanently, assessments of the economy have understandably turned sour. The poll finds that 34 percent of Americans give the economy a positive rating while 65 percent offer a negative rating, including 24 percent who offer the harshest verdict by saying the current state is "poor."

These overall findings mask sharp differences among partisans. Six in 10 Republicans currently give the economy positive ratings, including nearly 1 in 5 who say the economy is excellent. More than 8 in 10 Democrats and almost 7 in 10 independents, on the other hand, rate the economy negatively.

Biden's significant decline in personal popularity - last fall he was seen favorably by 53 percent and negatively by 37 percent - likely reflects some of the damage from attacks he received from Democratic rivals during the nomination contest and those the Trump campaign have been launching recently.

The Trump campaign has a huge financial advantage over Biden and is expected to use it to further sully his image in an attempt to re-create the circumstances that helped lead to Trump's election in 2016. Four years ago, Trump was seen unfavorably - but rival Hillary Clinton had an image nearly as negative. Compared to Clinton, Biden currently fares better. At this time four years ago, Clinton's favorability was 44 percent positive and 53 percent negative, the latter figure five points worse than Biden.

The difference is evident among both suburban women (56 percent say they are favorable of Biden now, 42 percent were favorable of Clinton then) and suburban men (43 percent vs. 33 percent).

Among Hispanics, whose votes are crucial to Democrats' hopes, Biden is viewed less favorably today than was Clinton in May 2016. Four years ago, Clinton was viewed favorably by 76 percent of Hispanics. Today, 56 percent see Biden favorably. During the primary season, Biden sometimes fared poorly among Hispanics compared with his rival Sen. Bernie Sanders, I-Vt.

Senior citizen voters helped propel Trump in 2016, and the poll underscores how the group's differing assessment of the 2020 matchup has complicated his chances in November. Four years ago, Trump won seniors by 7 points, 52 percent to 45 percent, according to network exit polls. In The Post-ABC survey, Biden has the edge among older registered voters by 10 points, 54 percent to 44 percent.

Trump also carried white women in 2016 by a margin of nine points according to exit polling, although other estimates find a narrower margin. The Post-ABC poll shows Biden at 51 percent to Trump's 45 percent, a narrow edge.

Biden holds a 2-1 lead among voters under age 40, a bigger margin than Clinton's in 2016. But those younger voters are both far less enthusiastic about supporting Biden and less likely to turn out to vote than older Biden backers.

Trump has the edge among voters in the South while Biden leads in the Northeast and the West. A subsample in the new poll that includes registered voters in Michigan, Pennsylvania, Wisconsin, Ohio and Iowa shows a tight contest across those states, with Biden at 51 percent and Trump at 46 percent.

The Post-ABC poll was conducted May 25-28 by phone among a random national sample of 1,001 adults, with 75 percent of interviews conducted by cellphone. The margin of sampling error for overall results is plus or minus 3.5 percentage points; the error margin is four points for the sample of 835 registered voters.