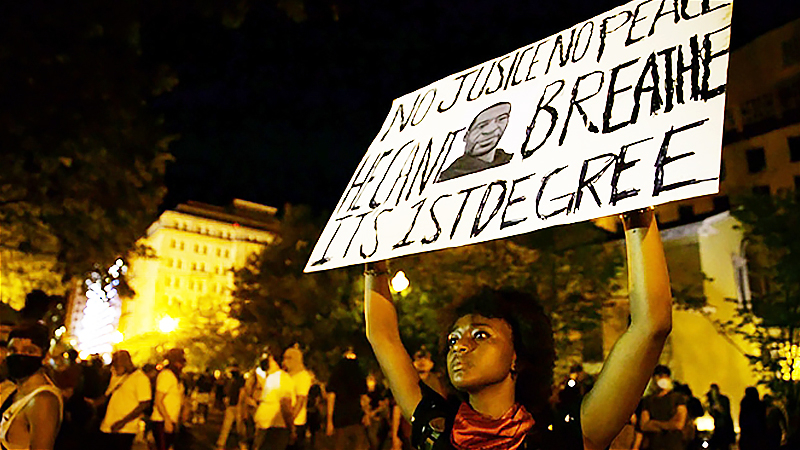 WASHINGTON - The third day of protests in the nation's capital over George Floyd's death began with bent knees, raised fists and pleas that this night, unlike the last, would remain peaceful. And in those moments Sunday, the more than 1,000 people who marched to Lafayette Square across from the White House listened.

Then came darkness and with it, another night of mayhem. American flags and parked cars and buildings were lit ablaze - including St. John's Church, a historic landmark opened in 1816 and attended by every president since James Madison. Firefighters quickly extinguished the basement fire, which police say was set intentionally.

Downtown, metal baseball bats bashed through shop windows; looters roamed, hitting stores miles from the White House. In the park, protesters faced the familiar pop, pop, pop of pepper bullets and stinging clouds of tear gas meant to push back hundreds of them as they tried, again and again, to break through the police barricades set up around President Donald Trump's home.

"Stop it! Stop!" yelled an African American woman who ran over to two skinny young black men as they hurled water bottles at the phalanx of officers.

"Civil disobedience! It's civil disobedience, and it means you sit your a-- down there and you don't move until they drag you away," she yelled, her voice hoarse. Defiant, the young men reloaded and kept throwing.

"They're dodging water bottles and we're dodging bullets," one yelled back, curling over in rage and near-sobs. "They're still killing us! They're still beating us! I see them put a knee on that man's neck and kill him! Civil disobedience gave us nothing!"

The latest confrontation - which climaxed at 10 p.m., when officers launched flashbangs in an apparent effort to clear the park - followed a weekend of intense, often violent clashes between heavily armored law enforcement officers and outraged activists, some of whom looted stores and set buildings ablaze in Washington and its neighboring suburbs.

On Sunday, the city and the region braced for another night of mayhem. District of Columbia Mayor Muriel Bowser, a Democrat, ordered a citywide curfew from 11 p.m. Sunday to 6 a.m. Monday. She also activated the D.C. National Guard.

In neighborhoods across D.C., people spent the afternoon hammering plywood boards outside retail shops and restaurants in the hope that their businesses would escape the attacks that others a day earlier did not. For some, those images, paired with the racial tension gripping dozens of cities across the country, conjured memories of the riots that ensued in 1968 after the assassination of the Rev. Martin Luther King Jr.

This explosion of anger coincides with a global pandemic that has taken more than 100,000 lives, including at least 4,300 in D.C., Maryland and Virginia. Though many protesters have worn masks, the gatherings seldom allow people to stay six feet apart from one another.

On Sunday, as in the days before, any fear of catching or spreading the virus did little to deter the crowds of people who showed up to express their frustration with police brutality.

Among them was Elizabeth Ferris, who had begun recording a video at an intersection just before the scene around her deteriorated. A flash bang fired. A girl sobbed.

"We have no weapons, what are you doing?" a man screamed, but Ferris, who is white, kept filming. She held her phone in one hand and poured water into a protester's eyes with the other.

Just then, Ferris screamed. The camera panned down. More than a half-dozen sting balls had struck her leg, leaving it pocked with deep, bloody red circles. Four volunteer medics rushed to wrap her leg; she did not want to leave.

"I took six rubber bullets, but do you know what didn't happen to me?" said Ferris, a 36-year-old student in foreign policy and public policy at Georgetown University. "No one kneeled on my neck."

She got up and limped toward the Capitol.

Amid other anxious moments between the two sides - the hurling of water bottles, startling charges by police, a man and woman both pepper-sprayed near the barricades - there were also genuine moments of unity, a stark contrast from the previous night.

A black officer, according to witnesses, briefly took a knee in solidarity with the protesters, who erupted in cheers.

Not long afterward, another officer made an announcement on a megaphone: "Attention: We will continue to move back unless you break the police line."

And again, cheering from the protesters, many of whom appeared to want the officers to join them rather than fight with them.

At the Capitol, protesters shouted at police, who stood masked and silent around the property's perimeter, to take a knee.

"It's not so hard to take a knee," they yelled at the officers.

"Hands up, don't shoot," they chanted as they raised their hands, and at last an officer responded.

"We're listening to you," said the woman, who was white. "We'll stand here all day."

Such moments were rarer Saturday, when downtown windows were smashed and fires were set. D.C. police said 17 people, mostly local, had been arrested. U.S. Secret Service and Park Police said they each arrested one person.

"We're sending a very clear message to people that they have a right to exercise their First Amendment rights but not to destroy our city," Bowser said Sunday on NBC News's "Meet the Press." "We saw a level of destruction and mayhem among some that was maddening."

In Virginia, Gov. Ralph Northam, a Democrat, declared a state of emergency a day after protests in Richmond and Manassas left businesses wrecked and Confederate statues vandalized.

The protests have triggered an angry response from President Donald Trump, who specifically singled out D.C. Bowser, in turn, has blamed Trump for stoking divisions, saying he had "glorified violence."

Bowser returned to that refrain during her television appearance Sunday. "I think the president has a responsibility to calm the nation," she said. "He can start by not sending divisive tweets that are meant to hearken to the segregationist past of our country." Bowser was referring to the president tweeting "when the looting starts, the shooting starts," a phrase infamously used by a Miami police chief during racial unrest in the 1960s.

Her denunciation of the president was echoed by Maryland Gov. Larry Hogan, a prominent Republican who has clashed with Trump in recent weeks over the federal response to the coronavirus pandemic. Hogan said he worked to "lower the temperature" during the 2015 protests in Baltimore after Freddie Gray died in police custody, a tack he said Trump had failed to take. "It's just the opposite of the message that should have been coming out of the White House," Hogan said Sunday on CNN's "State of the Union."

Bowser initially dismissed the value of imposing a curfew, saying, "We know people who were disruptive last night are not likely curfew followers." LaToya Foster, a spokeswoman for the mayor, said Bowser changed her mind "out of an abundance of caution."

D.C. Police Chief Peter Newsham - who noted that 11 of his officers were injured, including one who fractured a leg after being hit by a brick - blamed the violence and vandalism on a small group and said his officers were prepared to handle more unrest.

At least one of the business owners whose property was damaged said she bore no resentment toward the protesters.

Michelle Brown learned at midnight Saturday that her restaurant near the White House, Teaism, was on fire. Brown, still in pajamas, grabbed her hand sanitizer and car keys to go see the damage. Before she left, she wrote a tweet.

"Before anyone puts a single word in our mouths: Black lives matter," she wrote.

Brown learned that protesters had destroyed her 20-year-old tea chest and that her beloved artwork would soon be ash. Police prohibited her from entering her restaurant in the middle of the night, but hours later, she returned to find its charred remains. "It was heartbreaking," Brown said. "But this moment is not about us."

Brown wanted her customers to focus on the intense suffering that has swept the country instead of the damage done to her restaurant, because, she said, it would one day recover. "This seems pretty minor. . . . We have been through three months of being closed; we have seen 100,000 people die," she said, referring to the pandemic's impact. "I think the protests are great, and I think they are warranted."

On Sunday, Jay Michaels, angry and exasperated, decide to join the one outside the White House. The 23-year-old D.C. native walked there with a red bullhorn and a Washington Redskins mask. He wished he did not feel the need to protest but said he had no other choice.

"Turn the other cheek hasn't worked," said Michaels, a recent college graduate who wants to go to law school. "We've got to do something."

Michaels is tired of people looking at him like he's dangerous because he is black.

"This is not about D.C. police - this is about all police," he said. "If we burn everything down, then something has got to give."

By the time he arrived, the mood had grown more tense.

Each step the Secret Service officers took back from the police line drew taunts and the occasional water bottle.

"Do you feel like taking a knee now?" one man called out to a group of officers who briefly put down their riot shields.

The police advanced again; more people ran, and Mathis retreated with them.

Even then, Andrew Blunt, who had also come out Saturday, could sense a difference Sunday. It struck him that, after the protesters started throwing objects and jumping the barricade, others shouted at them to stop.

It sent a message, the 22-year-old thought: "What we did here yesterday, we're not doing that anymore."

But he acknowledged that the message might not hold, because nightfall was coming.