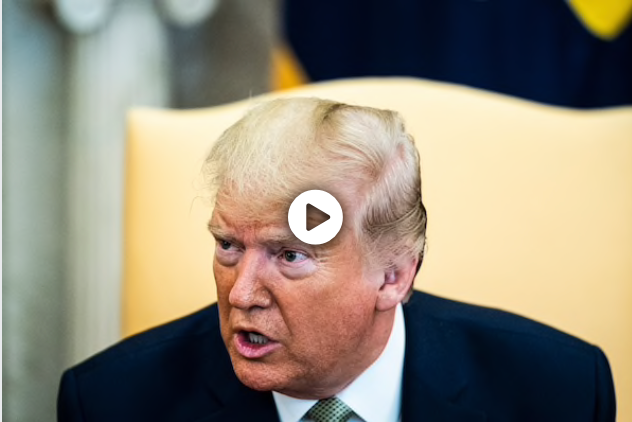 WASHINGTON - President Donald Trump militarized the federal response to protests of racial inequality that have erupted in cities across the United States late Monday, declaring himself the "president of law and order" as military police fired tear gas and rubber bullets at people protesting peacefully near the White House.

Calling the nationwide demonstrations "acts of domestic terror," Trump took the rare step of mobilizing the military and threatened to deploy troops to "quickly solve the problem" if state and local authorities do not immediately regain control of their streets.

Speaking publicly about the crisis for the first time since Saturday afternoon, Trump in the Rose Garden called those who have clashed with police, destroyed private property and looted "professional anarchists" and "violent mobs."

"These are not acts of peaceful protest," Trump said. "These are acts of domestic terror. The destruction of innocent life and the spilling of innocent blood is an offense of humanity and a crime against God."

Referring to the nation's capital, Trump said, "I am dispatching thousands and thousands of heavily armed soldiers, military personnel and law enforcement officers to stop the rioting, looting, vandalism, assaults and the wonton destruction of property."

As Trump spoke from the Rose Garden shortly before Washington's 7 p.m. curfew, the area around the White House became a frightening made-for-television scene of the militarized conflict the commander in chief envisioned.

Armed military police and other federal officers fired tear gas, pepper spray and rubber bullets at a large assembly of demonstrators who had been protesting peacefully along Lafayette Square and raising their hands in the air. The officers, some of them on horseback, used force to disperse the crowd in order for Trump to make a photo op at the historic St. John's Church, which was vandalized Sunday night, and hold up the Bible.

Officials seemed to suggest there was no connection between clearing the protesters and Trump's brief walk minutes later.

"The perimeter was expanded to help enforce the 7 p.m. curfew in the same area where rioters attempted to burn down one of our nation's most historic churches the night before," said White House spokesman Judd Deere. "Protesters were given three warnings by the U.S. Park Police."

Trump vowed to arrest, detain and prosecute protesters who threaten lives or property and vowed to "protect" Americans who are frightened by the chaos and unrest.

"I am your president of law and order," Trump said. He described himself as "an ally of all peaceful protesters," despite having repeatedly derided football player Colin Kaepernick and other athletes who have knelt peacefully in protest of racial injustice.

With his extraordinary comments and actions Monday, Trump risked escalating an already fragile standoff between police and protesters and inflaming tensions coursing through cities from New York to Los Angeles - as well as in Washington, where people have rioted and set fires a block from the president's fortified executive mansion.

Earlier Monday, Trump held a contentious call with the nation's governors in which he berated them as "weak," blamed them for the chaos and violence and said it was their responsibility to restore order.

Trump's militaristic posture and his advocacy for tough treatment of protesters alarmed some of the governors. Illinois Gov. J.B. Pritzker, a Democrat, who has tangled repeatedly with the president during the coronavirus pandemic, challenged him on the call, according to an audio recording of the private call that was obtained by The Washington Post.

"You have to dominate. If you don't dominate, you're wasting your time," Trump said. "They're going to run over you. You're going to look like a bunch of jerks."

Describing the intensifying crisis as a "war," the president told the governors, "You have to use the military." He announced that he had placed Gen. Mark Milley, the chairman of the Joint Chiefs of Staff, "in charge" of managing the unrest. Defense Secretary Mark Esper spoke briefly and told the governors, "We need to dominate the battlespace."

Trump said the governors ought not make any concessions and encouraged them to throw caution to the wind, saying, "You're allowed to fight back." For instance, he said, "When someone is throwing a rock, that's like shooting a gun." He added, "You have to do retribution, in my opinion."

Trump's language was remarkably unrestrained. He called Minnesota "a laughingstock all over the world," a characterization Gov. Tim Walz, a Democrat, later rejected. And at one point the president seemed to suggest some Democratic governors sympathized with looters when he remarked, "They are anarchists, whether you like it or not. I know some of you guys are [of a] different persuasion, and that's OK."

"The president repeatedly and viciously attacked governors, who are doing everything they can to keep the peace while fighting a once-in-a-generation global pandemic," Whitmer said in a statement following the call. "The president's dangerous comments should be gravely concerning to all Americans, because they send a clear signal that this administration is determined to sow the seeds of hatred and division, which I fear will only lead to more violence and destruction. We must reject this way of thinking."

Later in the day, Massachusetts Gov. Charlie Baker, a Republican, became visibly emotional at a news conference when he reflected upon Trump's call to "dominate" protesters.

"At so many times during these past several weeks, when the country needed compassion and leadership the most, it was simply nowhere to be found," Baker said. "Instead, we got bitterness, combativeness and self-interest. That's not what we need in Boston, it's not what we need right now in Massachusetts and it's definitely not what we need across this great country of ours, either."

Several consecutive days of mass protest followed the May 25 death of George Floyd, a black man who died in police custody in Minneapolis.

Although Trump addressed Floyd's death and the early protests during his visit Saturday to the Kennedy Space Center in Florida, he stayed silent outside Twitter about the escalating situation until Monday evening.

Two Republican strategists close to the White House, who spoke on the condition of anonymity to share candid assessments, said they were baffled by Trump's decision Saturday to fly to Florida to attend the launch of the SpaceX spacecraft with so much unrest in Minneapolis and many other cities. One of them recalled a conversation with White House officials, who tried to explain the "strategy" of the president's response.

"Who scheduled and approved that trip?" the strategist said. "It's not about strategy when the country is burning down. You have to say something."

Inside the White House, where aides still are haunted by Trump's prime time Oval Office address in March about the coronavirus, aides intensely debated him giving a similar address focused on the protests over racial injustice.

Two of the president's most influential advisers, son-in-law Jared Kushner and Hope Hicks, argued vociferously against Trump delivering a speech over the weekend, according to people familiar with the matter. One concern was that if Trump were to give a speech, the riots could be "just as bad or worse," in the words of one White House official.

White House press secretary Kayleigh McEnany on Monday defended Trump's handling of the protests. She rejected the characterization of Trump as silent, claiming that the death of Floyd has "weighed on his heart" and noting that the president has discussed it multiple times.

Jason Miller, an outside adviser who keeps in close touch with White House officials, said in this case actions would speak louder than words.

"There's no magical kumbaya speech from the Oval Office that's going to keep people from rioting and protesting," Miller said. "You're going to have to go and knock some of the bad guys around a little bit."

He added, "President Trump wasn't hired to be the consoler in chief. He was hired to be a rejection of the flowery language of nothing happening."