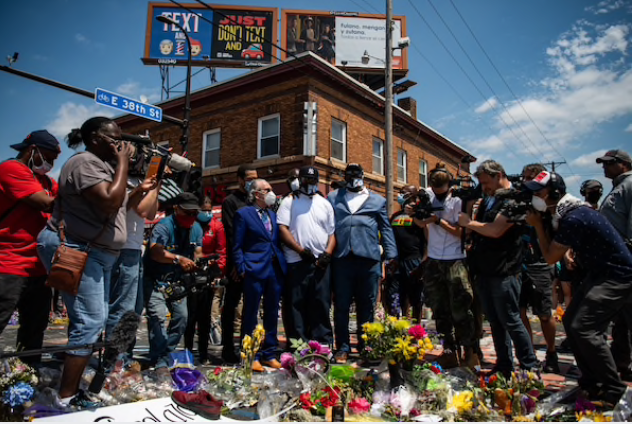 Terrence Floyd, the brother of George Floyd, center in white T-shirt, visits a memorial for his brother at the intersection of 38th Street and Chicago Avenue in Minneapolis on Monday. MUST CREDIT: Washington Post photo by Salwan Georges.

MINNEAPOLIS - Two autopsies of George Floyd differ on exactly what caused his death, but they agree on this much: The 46-year-old African American man was a victim of homicide.

The Hennepin County Medical Examiner released a report Monday saying that Floyd died of "cardiopulmonary arrest complicating law enforcement subdual, restraint, and neck compression." The report notes that Floyd also suffered from heart disease, fentanyl intoxication and recent methamphetamine use, but it does not list those factors in the cause of death.

The official results contrast with an independent autopsy commissioned by Floyd's family, which was released earlier Monday. That autopsy, conducted by former New York City medical examiner Michael Baden and the University of Michigan's Allecia Wilson, determined that he died of "asphyxiation from sustained pressure" after being pinned down by his neck and back.

"Essentially, George died because he needed a breath," Benjamin Crump, an attorney for the family, said at a news conference Monday.

Baden said no underlying medical conditions caused or contributed the Floyd's May 25 death. Floyd, who was suspected of trying to use a counterfeit $20 bill at a deli, died after an arrest in which 44-year-old police officer Derek Chauvin pressed his knee into Floyd's neck, even after he lost consciousness. Other officers also helped restrain Floyd.

"The officers killed him based on a knee to his neck for almost nine minutes and two knees on his back, compressing his lungs," Crump said. "The ambulance was his hearse."

Chauvin was arrested Friday on charges of third-degree murder and second-degree manslaughter. Floyd's family has pushed for first-degree murder charges, and Crump said they want the other officers involved to be prosecuted "to the fullest extent of the law."

The findings marked the latest twist in a case that set off a wave of angry and at times violent protests in dozens of cities around the country.

In a call Monday, President Donald Trump chided the nation's governors, calling them "weak" in the face of mounting protests over racial injustice and urging them to crack down aggressively to quell unruly demonstrations. Curfews remained in place in cities from coast to coast. Military vehicles rumbled through major urban streets, where authorities in riot gear have become a common sight.

Minneapolis saw a respite from the worst of the unrest as Sunday gave way to Monday - finally, a night without the barrage of fires, looting and violence that have cut a wide swath of devastation through the heart of this Midwestern city.

But it remained a city on edge inside a nation on edge.

Democratic Gov. Tim Walz said Monday that a 10 p.m. to 4 a.m. curfew would stay in effect as the state tries to emerge from days of upheaval. He added that Floyd's funeral, scheduled to take place on Thursday, would be a "significant event" for the state as it moves toward healing.

Walz also said he objected to Trump's characterization that states with violent protests had become a "laughingstock" to the rest of the world. "I said, 'No one's laughing here,' " Walz said. "We're in pain. We're crying. We saw a man lose his life."

Walz said he took issue with Trump's emphasis on a "posture of force," saying it was unsustainable, both "militarily" and "socially."

The release Monday of the autopsies once again highlighted a central question that has lingered since video of Floyd's brutal arrest surfaced: Will justice eventually be served in the case, and what exactly would that look like?

Minnesota Attorney General Keith Ellison, who has taken over as prosecutor for the Floyd case, cautioned the public Monday about expecting certain results.

In an interview with SiriusXM's "The Black Eagle," Ellison reminded listeners of multiple instances in which police officers have avoided consequences sought by prosecutors even after their misconduct has led to a black man's death. He mentioned in particular the case of Freddie Gray, who died in Baltimore in 2015 after suffering a severe spinal injury while riding in the back of a police van.

"I just want to caution folks," Ellison said. "I don't deny that your eyes are working well and you saw what you saw, but that doesn't mean that when we get to a courtroom that it's going to be some sort of easy slam dunk. History proves that it isn't."

Chauvin, the officer who used his knee to pin Floyd's neck to the ground, will have his first court appearance on June 8, according to Hennepin County District Court filings. Chauvin and three other officers involved in Floyd's arrest were fired following the incident.

While a shaken community awaits that justice, while it prepares to formally mourn Floyd this week, and while the anger over his death and others like it simmers unresolved, people in Minneapolis tried to pick up the pieces of the dark week behind them.

After traveling from Brooklyn to Minneapolis to visit the site of his brother's death, Terrence Floyd expressed disappointment that some protests across the country have turned violent.

Speaking on ABC's "Good Morning America," Floyd said George was a "gentle giant" who valued peace and unity and would want protesters to channel their anger "to do something positive."

In an emotional speech at the site of his brother's killing, Terrence Floyd urged an end to violence and more focus on enacting change through voting.

"I understand you're all upset. But like it was already said, I doubt you're all half as upset as I am," he said, adding that causing damage to the community would prove counterproductive. "That's not going to bring my brother back," he added.

In Northeast Minneapolis, a residential area with a blossoming arts district, traffic on main thoroughfares started to pick up to levels not seen in weeks as people began to resume old routines interrupted by the coronavirus pandemic and the recent protests.

Bars and restaurants began to open for patio service, which on Monday was permitted for the first time since the state's stay-at-home order took effect.

"A lot of us have been at the protests. I support everything that has been going on," said Kevin Smith, 35, a bar manager at Stanley's, where workers were setting up tables on the patio. "We are ready to work, but our minds are very much in other spots right now."

At Mama Sheila's House of Soul, a small restaurant located at 38th and Bloomington, just down the road from the incident that sparked the protests of recent days, owner Sheila Brathwaite was preparing for the lifting of coronavirus restrictions. She would soon be whipping up her signature buffet of mac-and-cheese, yams, collared greens with turkey, and fried chicken.

But her mind was also on the unrest unfolding in her city.

"You can imagine the devastation I felt to see my whole community go up in flames," she said. "It's surreal. It's unbelievable at this time. There are so many things that are going on with coronavirus. It's just too much."

Just a block from where Floyd died, Smoke in the Pit was also open on Monday.

"It's a workday," said the owner, 58-year-old Dwight Alexander. "I got to feed my family."

Alexander has lived in the neighborhood for three decades. He has seen good, bad and everything in between. Now, he said, he feels a duty to help feed some of the hundreds of people gathering nearby each day to mourn Floyd and to push for national change.