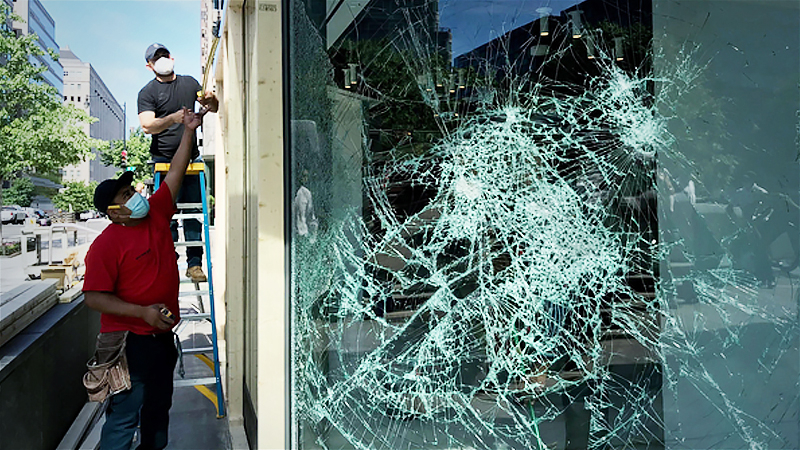 Crews board up windows and cover damage at a District of Columbia building on Monday, June 1, 2020, a day after protests became violent. MUST CREDIT: Photo for The Washington Post by Amanda Voisard

By The Washington Post · David A. Fahrenthold · NATIONAL, COURTSLAW, RACE

Cities across the United States braced for another chaotic night of protests against police violence Monday as New York and other hard-hit cities imposed curfews and President Donald Trump urged governors to use more force.

On Monday, Floyd's family released the results of an independent autopsy, which found that Floyd's cause of death was "asphyxiation from sustained pressure," family lawyers said.

"Essentially, George died because he needed a breath," said attorney Benjamin Crump. Earlier, a preliminary autopsy done by the Hennepin County medical examiner found no evidence of strangulation or asphyxia. Chauvin has been charged with third-degree murder and second-degree manslaughter.

Floyd's brother Terrence made an emotional plea to protesters at the site of his brother's death, saying violence and vandalism were "not what my brother was about."

Protests took place in more than 100 cities over the weekend - in some places, leading to widespread vandalism and aggressive use of force by police.

In Washington, where vandals had smashed windows and set fire to a historic church near the White House, Mayor Muriel Bowser, a Democrat, put the city on a curfew that started at 7 p.m., before dark fell. In New York, Mayor Bill de Blasio, a Democrat, also set a curfew - the city's first in decades - after several nights of running confrontations between officers and protesters.

The Associated Press estimated that more than 4,000 people had been arrested over the weekend.

Trump said the problem was that there was not enough force. In a call with the nation's governors, he told them: "You have to dominate. If you don't dominate, you're wasting your time," according to a recording obtained by The Washington Post. On Twitter, the president agreed with a call from Sen. Tom Cotton, R-Ark., to use Army paratroopers against the protesters.

In Louisville, Kentucky, Floyd's death had already reignited outrage over the death of Breonna Taylor, an African American EMT killed in her home during a nighttime police raid in March.

Then, early Monday, another death. David McAtee, 53, a black man who owned a well-known Louisville barbecue restaurant, was killed when police and National Guard troops - confronting a crowd near McAtee's restaurant - fired at an unknown gunman they believed had shot at them, according to police accounts.

Kentucky Gov. Andy Beshear, a Democrat, urged city police to release all available video of the incident "before nightfall" so residents could see it.

Later, it was revealed that some of the Louisville police officers involved had not activated their body cameras. Louisville Mayor Greg Fischer, a Democrat, fired the city's police chief in response.

In Omaha, Nebraska, prosecutors said a bar owner who killed a 22-year-old black protester Saturday would not be charged because he was acting in self-defense. Jake Gardner, the bar owner, shot 22-year-old James Scurlock after a verbal confrontation turned violent and Scurlock and others tackled him.

"This individual, when he gave his statement, his version was, 'I thought I had to do this, I thought I was going to get hurt or killed,' " Douglas County Attorney Don Kleine, a Democrat, said of Gardner. "That's the question then: Is it justifiable use of force?"

In other cities, police said they had arrested people who took part in vandalism.

In Minneapolis, federal authorities charged a 28-year-old man from Illinois with rioting. "I'm going to Minneapolis tomorrow who coming only goons," the man, Matthew Rupert, allegedly posted on Facebook.

In Pittsburgh, police said they had arrested a 20-year-old man who allegedly smashed the windows of a police car as other protesters urged him not to.

And in New York, prosecutors laid out their case against two lawyers who allegedly set a police van on fire Saturday with a molotov cocktail. The two had toilet paper, a lighter, a Bud Light beer bottle and "a liquid suspected to be gasoline in the vicinity of the passenger seat and a gasoline tank" in the 2015 Chrysler minivan they were driving, according to court papers.

"He's a person with an extraordinary career that was just starting in the law," prosecutor Ian Richardson said of one of the lawyers, Colinford Mattis, a Princeton University graduate. "He had some of the best education you could have in this country, and yet he risked everything to drive around in a car with molotov cocktails attacking police vehicles and police officers."

In Minnesota on Monday, Gov. Tim Walz, a Democrat, announced that the state will remain under curfew for the next two days. But he said he plans to let some National Guard members return to their homes, after previously mobilizing the state's entire Guard force.

In other places, the number of security personnel on duty was growing. In New York, Gov. Andrew Cuomo, a Democrat, said the police presence in New York City would double Monday night, with 4,000 more officers.

In Washington, Attorney General William Barr said he had deployed riot-trained officers from the Federal Bureau of Prisons to help with crowd control. Mark Morgan, the acting commissioner of Customs and Border Protection, posted a photo on Twitter showing several hundred green-clad Border Patrol officers who had come to Washington for the protests.

"These 'protests' have devolved into chaos & acts of domestic terrorism by groups of radicals & agitators," Morgan wrote. He said his agency "is answering the call and will work to keep DC safe."

In cities hit hard by rioting, people spent Monday cleaning up glass and debris - trying, like many Americans, to figure out what Tuesday would look like and how this will end.

In Philadelphia, Steven Hall, 52, stood outside Kings Fashion, looking in dismay at its smashed exterior and charred interior. He has worked at the clothing store for 19 years and was on the scene at 7:30 a.m. to see how the shop fared. He gestured at the small crowd gathered around him, some armed with spray bottles of cleaner.