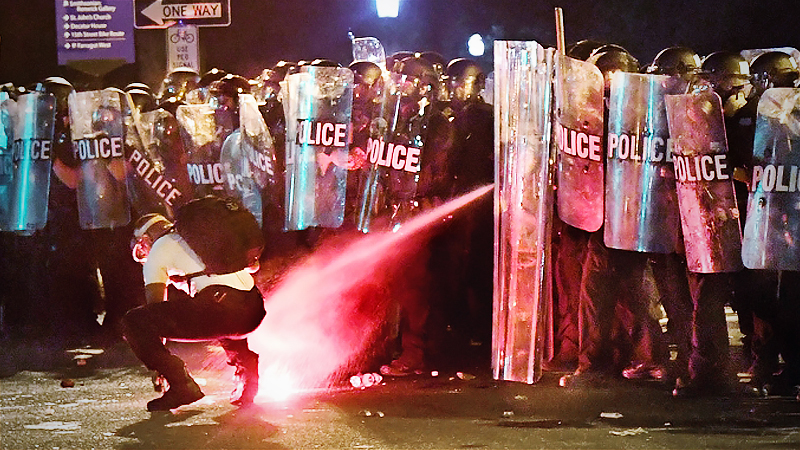 One Lafayette Square protester went to retrieve a flare early Sunday that had been tossed at police and was immediately doused with tear gas. MUST CREDIT: Washington Post photo by Michael S. Williamson.

WASHINGTON - The nation's capital has long been a bastion for free speech, the place where battling over competing ideas and voicing grievances to the people in charge is practically engraved on the city's welcome mat.

But after peaceful demonstrations morphed into rage and mayhem, threatening to tear apart the city over the police killing of George Floyd in Minneapolis, a mayor who embraces the protesters' cause is now struggling to quell violence without further inflaming anti-police sentiment.

It was not immediately clear whether other agencies were involved; the park is federal property. A District of Columbia police spokesman said he did not think city officers were part of that action.

The scene was sure to further enrage demonstrators and could further upend attempts by D.C. leaders to carry out a delicate - and perhaps now impossible - balancing act to end looting and regain control without stifling those who came to peacefully protest police tactics. It has brought a public safety crisis on top of a still raging pandemic and economic hardship.

But it appeared to some that the looting went unchallenged over the weekend, and Trump, who has used racially divisive language to criticize the city's response, on Monday accused some governors of being "weak" and told them they should "dominate" unruly protests. The Justice Department ordered federal riot-control police into D.C. and Miami. In his address Monday evening, Trump said some governments "have failed to take necessary action to safeguard their residents."

"The cops are in a tough situation right now," said Brian Higgins, a professor at John Jay College of Criminal Justice and a former police chief in Bergen County, New Jersey. "If they react, they are keeping down people who are protesting the death of Mr. Floyd. If they don't do anything, it looks like they're letting the city burn."

D.C. Mayor Muriel Bowser, a Democrat, on Monday defended her handling of the demonstrations, which began Friday night and have continued, and said she and Police Chief Peter Newsham are "very focused on maintaining public order."

She imposed a 7 p.m. curfew on D.C. for Monday and Tuesday nights and said she spoke to the secretary of the Army about how to deploy the D.C. National Guard. In the previous few nights, the Guard supported the U.S. Park Police and was not available to staff all posts requested by the local government.

Bowser had initially rejected imposing a curfew, saying on national television Sunday morning that people who had been disruptive would not abide by it. Later, she said the curfew would help empty the streets of law-abiding protesters and citizens and make it easier for police to concentrate on the agitators whom she called "organized," having shown up with bags of rocks and tools to break windows and dislodge bricks.

"I was struck by how it was an organized group that appeared more bent on destruction than on protest," Bowser said over the weekend.

On Monday, Bowser said police are seeking "people bent on destruction," and she noted that over the past two days, "we got quite a few of them."

Police arrested more than 100 people over the previous two nights of upheaval that left many federal and D.C. officers injured, one with a compound fracture from a thrown brick. As the defendants filed through D.C. Superior Court on Monday, rioting charges against many were dropped, leaving them facing lesser charges such as unlawful entry or destruction of property.

Newsham has routinely declined to discuss specific tactics, but he said he "does not know of an instance where our police department did not respond to a looting in progress."

He called it unfair to put a stopwatch to every call, noting the mayhem included "simultaneous incidents over an expansive region."

"Quick is in the eye of the beholder," he continued.

It appeared that on Sunday night and early Monday, officers did not attempt to corral the rioters, as they did during unrest at the last presidential inauguration, a tactic that drew lawsuits and complaints that innocent people were swept into the police dragnet. Prosecutors dropped hundreds of cases.

Instead, federal officers continually worked to push hundreds of demonstrators away from the White House and out of Lafayette Square across the street as police tried to divert them away from downtown and out of the city. Along the way, some people looted stores, broke windows, set fires and overturned vehicles.

Newsham said that there were "quite a number of people engaged" in civil unrest and that having officers wade into large crowds can agitate rather than calm. He said more arrests will be made using surveillance video and other types of investigations.

"If you didn't see an arrest on the scene," the chief said, "you can rest assured we are not going to rest until we hold everybody accountable."

Terrance Gainer, a former executive for the D.C. police and former chief of the U.S. Capitol Police, said: "It's impossible for citizens or the police to see everything. There's simply not enough police in any city to manage thousands of people when they go on a rampage."

Police officials and experts said departments must consider a volatile dynamic across the country, noting anger over the death of a black man detained by a white officer, combined with years of racial and economic inequities. At the same time, demonstrators and police face the threat of a deadly disease that has claimed more than 100,000 lives.

Across the country, lines of police officers are facing off with crowds of protesters. In some instances, police have been seen trying to empathize with the demonstrators by marching with them or taking a knee in support, though those images have been offset by videos of police firing projectiles at reporters and, in New York, driving a cruiser through an angry crowd and pushing a woman to the ground.

Police chiefs and other executives have rushed to condemn the killing of Floyd, with the District's Newsham calling it "nothing short of murder." But those remarks have done little to assure that years of racial strife in policing can be overcome so easily.

Daniel Linskey, a former police chief in Boston, said people intent on causing damage may have been emboldened after police in Minneapolis abandoned a station house to some protesters, who he said "are showing up with weapons and organization and timing. They are outpacing police resources at a time when police are hesitant to take action that may seem heavy-handed."

Gainer said he believes that over the years, in trying to improve community relations, "police chiefs and elected officials are trying to be very sensitive to empathizing with the emotions of the real protesters while also trying to take some effective law enforcement action to stop the looting."

That, Gainer said, "left law enforcement flat-footed a little bit. . . . I think everybody was trying to be very tolerant and the violent agitators got ahead of the police planning in this."

Kim Dine, a former chief of the Capitol Police, said it would be impossible and wasteful for police to target individual looters and cause officers to fall behind in their objective of clearing the streets. "The main philosophy is: Protecting life is more important than protecting property," Dine said. Chasing individuals "is like creating a riot within a riot. You'll have 100 officers chasing a couple of people."