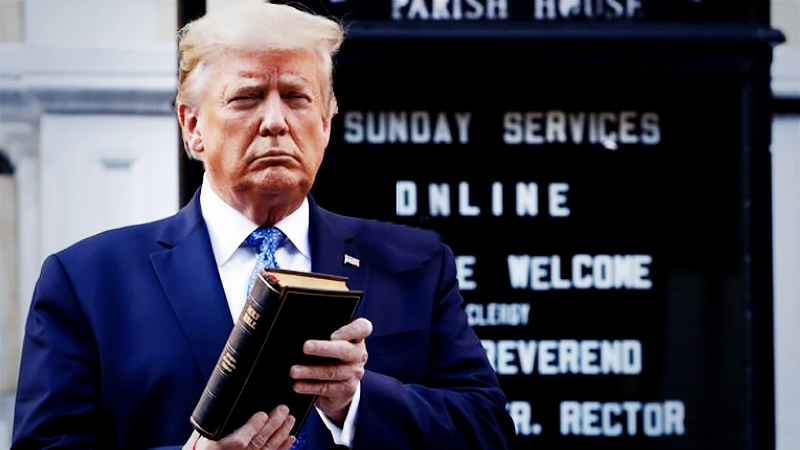 WASHINGTON - The Right Rev. Mariann Budde, the Episcopal bishop of Washington, was seething.

President Donald Trump had just visited St. John's Episcopal Church, which sits across from the White House. It was a day after a fire was set in the basement of the historic building amid protests over the death of George Floyd at the hands of Minneapolis police.

Before heading to the church, where presidents have worshiped since the days of James Madison, Trump gave a speech at the White House emphasizing the importance of law and order. Federal police officers then used force to clear a large crowd of peaceful demonstrators from the street between the White House and the church, apparently so Trump could make the visit.

"I am outraged," Budde said in a telephone interview a short time later, pausing between words to emphasize her anger as her voice slightly trembled.

She said she had not been given notice that Trump would be visiting the church and did not approve of the manner in which the area was secured for his appearance.

"I am the bishop of the Episcopal Diocese of Washington and was not given even a courtesy call, that they would be clearing [the area] with tear gas so they could use one of our churches as a prop," Budde said.

She excoriated the president for standing in front of the church - its windows boarded up with plywood - holding up a Bible, which Budde said "declares that God is love."

"Everything he has said and done is to inflame violence," Budde of the president. "We need moral leadership, and he's done everything to divide us, and has just used one of the most sacred symbols of the Judeo-Christian tradition."

Trump did not enter the church Monday evening. No one associated with St. John's was present for his visit.

Andrew Whitehead, a sociologist at Clemson University who studies Christian nationalism, said Trump's appearance in front of the building was an attempt to promote the idea of the United States as a distinctly Christian nation.

"Going to the church, not going in it, not meeting with any clergy, holding up a Bible, but not quoting any scripture, after an authoritarian speech, was about using the religious symbolism for his ends," Whitehead said.

Trump has used the Bible to make a gesture in the aftermath of tragedy before. After tornadoes ripped through cities in Alabama in 2019, he signed several copies of the Bible for supporters during a visit to the state.

This time, Whitehead said, the president used the Bible to support his Rose Garden speech.

"It was a signal to the people that embrace the idea of a Christian nation, that he will defend Christianity in the public sphere," Whitehead said. "He said he'll make America safe. That raised the question, for whom? It's largely for white, mostly Protestant America."

Budde - who spent 18 years in as a rector in Minneapolis before being elected bishop of the Washington diocese - said the Episcopal church disassociates itself from the messages offered by the president.

"We hold the teachings of our sacred texts to be so so grounding to our lives and everything we do," she said. "It is about love of neighbor and sacrificial love and justice."

In a written statement, Presiding Bishop Michael Curry, head of the Episcopal denomination, accused Trump of using "a church building and the Holy Bible for partisan political purposes."

"This was done in a time of deep hurt and pain in our country, and his action did nothing to help us or to heal us," Curry wrote.

"The prophet Micah taught that the Lord requires us to 'do justice, love mercy and walk humbly with our God,' " he continued, calling on Trump and others in power to be moral. "For the sake of George Floyd, for all who have wrongly suffered, and for the sake of us all, we need leaders to help us to be 'one nation, under God, with liberty and justice for all.' "

Following a presidential tradition set by President Franklin D. Roosevelt, Trump attended a service at St. John's before his swearing-in ceremony in 2017. He visited the church again that year to mark a national day of prayer for victims of Hurricane Harvey and in 2019 on St. Patrick's Day.

Budde said she learned he was headed back to the yellow 19th century building on Monday by watching the news. "No one knew this was happening," she said. "I don't want President Trump speaking for St. John's."

The Rev. Robert Fisher, the church rector, said he felt blindsided by the visit. Usually, the White House gives the church at least 30 minutes' notice before the president comes by.

"We want St. John's to be a space for grace, as a place where you can breathe," he said. "Being used as a prop, it really takes away from what we're trying to do."

Earlier in the day, Fisher said, he and other clergy were outside the church handing out water bottles and granola bars to protesters, and expressing solidarity with their cause. He said he watched images of the protest being dismantled "with disbelief."

Fisher, 44, became the rector of St. John's in June 2019, and has not yet hosted a presidential visit. The church usually draws about 400 people on a typical weekend. But it has been closed since mid-March due to the broad shutdown restrictions in place to combat the novel coronavirus.

Damage to the building from Sunday night's fire and vandalism will cost at least $20,000, Fisher said. But he said the destruction should not become the focus of what has been happening in the streets outside the White House.

Fisher said that when people have talked about the church being burned, he has tried to redirect them, saying it was likely one person who does not represent the majority of people protesting.

"That has pulled away from the more important message that we have to address racism in this country," he said.