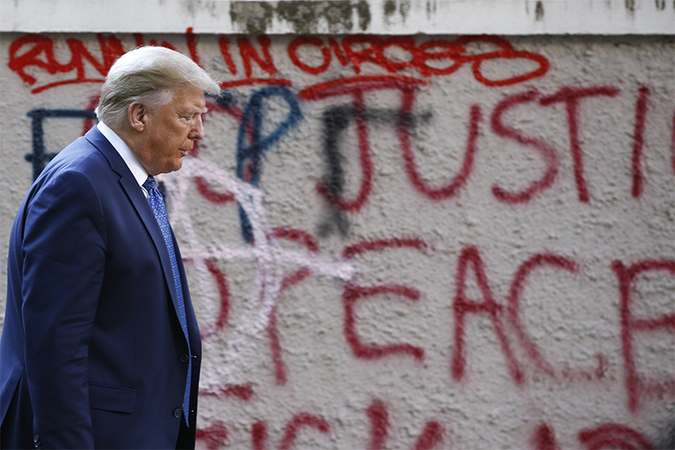 WASHINGTON - The Trump administration significantly expanded the military response to unrest in Washington, sending more National Guard members to the streets of the capital Monday night and keeping active-duty forces on alert nearby if needed, defense officials said.

As upheaval continues in the nation's capital and other cities a week after the death of George Floyd, a black man who died in police custody in Minneapolis, the District of Columbia National Guard has been fully activated, said senior defense officials, who like other officials spoke to reporters on the condition of anonymity to describe the government's plans. In addition to those approximately 1,200 troops, up to 800 additional National Guard members from five other states also will be sent to the nation's capital, the officials said.

The evolving response has also included discussions about whether the administration should invoke the Insurrection Act, which permits President Donald Trump to deploy active-duty forces to quell domestic unrest. The hope is that the active-duty Army will not be needed, said a senior defense official.

Addressing Americans from the White House on Monday, the president spoke of employing a strong military response in states where local authorities did not take adequate action on their own, but he did not expressly say he was employing that act.

In a conference call with governors earlier in the day, Trump referenced destruction in Washington, where businesses have been looted, cars have been burned and national monuments have been defaced in the past few days. The president has repeatedly criticized the D.C. government and its Democratic mayor, Muriel Bowser.

The crisis presents a renewed dilemma for Pentagon officials as they seek to assist with the state and federal response but risk being pulled further into a politically polarized situation.

Esper said the Defense Department stood "in full support" of state authorities and federal law authorities. He said that 17,000 National Guard members deployed in 29 states but that most of the states had deployed fewer than 200 people.

Speaking during a phone briefing with reporters, the defense officials said a contingent of active-duty military police and engineers had been brought to the Washington area but remained outside the District of Columbia and had not been deployed. The officials said they hoped the active-duty forces would not have to be deployed.

The Trump administration has the power to more directly control the National Guard in Washington, which does not have a governor who can activate those troops like states do.

"The 'battle space' of America???" tweeted retired Army Gen. Tony Thomas, who previously headed U.S. Special Operations Command. "Not what America needs to hear . . . ever, unless we are invaded by an adversary or experience a constitutional failure . . . ie a Civil War."

Retired Gen. Martin Dempsey, who served as chairman of the Joint Chiefs of Staff under President Barack Obama, urged respect for members of the military in another Twitter message. "America is not a battleground. Our fellow citizens are not the enemy."

Sen. Martin Heinrich, D-N.M., told Esper in a tweet that "my state is not a 'battlespace.' "

"To every member of our military: it is imperative that you remember, now, that your duty is to our constitution and our country, first and above all else," Heinrich wrote.

One of the senior defense officials characterized Esper's remarks as a reflection of military terminology.

"We don't have exact terms for this civilian context, so the term the secretary used is just a general term for the area in which we are operating, whether that's in air, sea, land or cyberspace," he said "That's a general benign term."