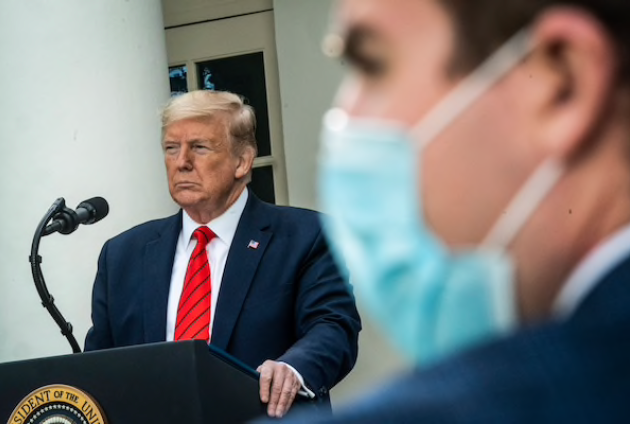 WASHINGTON - The Trump administration said Tuesday it was investigating digital services taxes being enforced or considered by several U.S. trading partners including the European Union, India and Brazil, opening the door to the first new tariffs since the economy tumbled into a deep recession.

The announcement from Robert Lighthizer, the U.S. trade representative, showed that President Donald Trump is determined to pursue his "America First" trade offensive despite the coronavirus pandemic that caused the economy to grind to a halt and the worst social unrest in more than 50 years.

The investigation follows a similar probe last year of a proposed French tax, which authorized the president to impose tariffs of up to 100 percent on a range of products from France, including popular wines and cheeses.

American importers of French goods protested loudly while the French threatened to retaliate with their own tariffs. But in January, the two countries paused their dispute while the Organization for Economic Co-operation and Development (OECD) tries to broker a global consensus on digital taxation. Officials hope to reach an agreement by October.

The president's use of tariffs to coerce U.S trading partners to enter negotiations has shown mixed results. He got Mexico and Canada to enter a new North American trade deal, which takes effect on July 1. He secured a modest updating of a trade pact with South Korea. And he secured a partial trade deal with China, only to see its implementation lag amid the pandemic.

Trump generally prefers direct talks with a single trading partner to the multilateral negotiations pursued by his predecessors. His latest tariff threat, however, is aimed at prodding countries that are considering taxes tailored to hit U.S. digital giants to settle for just such a multicountry arrangement.

If the talks led by the Paris-based OECD falter and the digital tax investigation results in new tariffs, it could wreck several ongoing trade negotiations, including with the U.K., EU and India.

Jordan Haas, director of trade policy for the Internet Association, which also represents the digital giants, said: "Targeted discriminatory taxes against U.S. firms are not an appropriate solution."

Tuesday's USTR statement said the investigation would cover the EU and nine countries: Austria, Brazil, the Czech Republic, India, Indonesia, Italy, Spain, Turkey, and the United Kingdom. The probe is being conducted under Section 301 of the 1974 trade act, which grants the president broad powers to impose tariffs if a country's trade practices are judged to be unfair to U.S. companies.

The administration used the same provision to impose tariffs on more than $300 billion worth of Chinese products in a two-year conflict that resulted in a partial trade deal in January.

"President Trump is concerned that many of our trading partners are adopting tax schemes designed to unfairly target our companies," said Lighthizer. "We are prepared to take all appropriate action to defend our businesses and workers against any such discrimination."

U.S. officials say the taxes discriminate against the American Internet companies that dominate the online economy, such as Google, Facebook, and Amazon. Countries adopting the digital taxes complain that the American companies exploit local consumers for their valuable data without paying sufficient taxes in return.

Unlike traditional corporate levies, the so-called "digital services taxes" typically apply to revenue earned in a particular jurisdiction even if a company has no physical presence there. The proposals vary between countries. But the focus on revenue threatens to impose "crippling costs" on digital companies that have strong sales and low or nonexistent profits, said Joe Kennedy, senior fellow with the Information Technology and Innovation Foundation.

The United Kingdom is considering a 2 percent tax on search engines, online marketplaces and social media platforms serving consumers in the U.K.. The European Commission has proposed a 3 percent tax on revenue from a variety of online activities, including the sale of data collected from users in the 27-nation single market, according to the nonpartisan Tax Foundation in Washington.

Trump spoke on Monday by phone with Brazilian President Jair Bolsonaro and the two leaders agreed "that the free flow of commerce between the United States and Brazil is an economic priority for both countries," according to a White House statement.

Brazil's legislature, the Chamber of Deputies, is considering a proposal to establish a progressive tax on e-commerce sales to consumers in Brazil.