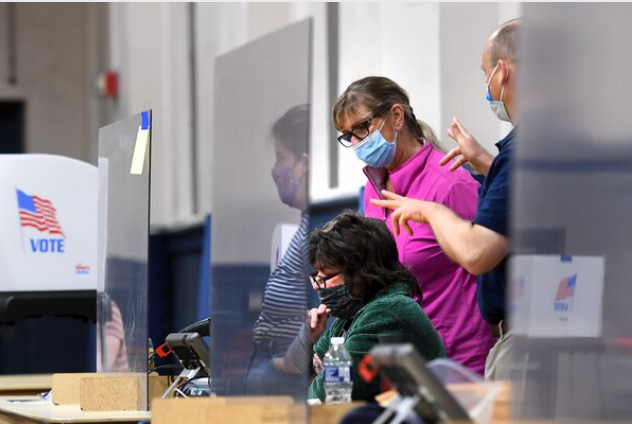 Election officials Barbara Christie, seated, Barbara Dodge and Marc Mitchell help Hannah Jacobs, reflected in the plexiglass shield, cast her ballot in the Maryland primary Tuesday at the William R. Talley Recreation Center in Frederick. Masks and other precautions were used to guard against spread of the novel coronavirus, and voters were encouraged to cast ballots by mail. MUST CREDIT: Washington Post photo by Katherine Frey.

Most of Virginia will enter a second phase of reopening from the months-long coronavirus shutdown Friday, Gov. Ralph Northam said, citing steady declines in the number of covid-19 hospitalizations and rates of people testing positive since he began lifting shutdown restrictions nearly three weeks ago.

Both northern Virginia and the city of Richmond, which were hit harder by the novel coronavirus and began reopening last week, will remain under the more stringent Phase 1 portion of the state's plan to return to normalcy, said Northam, a Democrat.

"We are still in this pandemic," the governor said. But, with hospitals able to absorb the still-steady flow of new covid-19 patients while testing capacity increases, "I feel comfortable allowing most of Virginia to move into Phase 2 this Friday."

The looser restrictions include opening restaurants for indoor dining at half-capacity and allowing gyms and fitness centers to reopen at 30% capacity. The changes come as the spread of the virus appears to be slowing across the Washington region.

The tally of known infections reached 109,300 in the District of Columbia, Maryland and Virginia on Tuesday, with 4,474 deaths after 62 more fatalities were recorded.

But hospitalizations, the number of intensive care unit beds in use and positivity rates on tests have all been dropping, prompting Maryland Gov. Larry Hogan, a Republican, to say he might also further ease restrictions soon.

"All the numbers are down, so we're very excited about that," Hogan said in a radio interview. "I think we're ready to take some further steps."

D.C. Mayor Muriel Bowser, a Democrat, did not address the pandemic Tuesday during a briefing that focused on the ongoing protests against police violence.

D.C., Maryland and Virginia have had different restrictions in place during their initial stages of ending coronavirus-related shutdowns that have stifled the local economy. D.C. and its suburbs, where the pandemic was most intense, only recently began to reopen.

Hogan warned in the interview with WBAL radio that large public gatherings, including protests that have attracted thousands of demonstrators in Baltimore, D.C., Richmond and elsewhere in recent days, could lead to more infections.

But, he said, it is too soon to tell.

"It's certainly still not safe to gather in large numbers in close proximity," Hogan said. "And we saw an awful lot of that. So hopefully it's not going to be bad, but it's definitely something that the doctors and the scientists are worried about."

In Virginia, the next phase means groups of as many as 50 people will be allowed to gather, instead of the initial limit of 10 or fewer. Besides restaurants and gyms, that will allow some entertainment venues to reopen, while pools, museums and zoos can reopen with restrictions, officials said.

Recreational sports will also be allowed with proper distancing and no sharing of equipment.

Accomack County on the Eastern Shore, which had also lagged behind the rest of the state because of hot spots in poultry processing facilities there, will also move into Phase 2, Northam said.

But the governor resisted allowing northern Virginia and Richmond to move forward, despite assurances from local officials in D.C.'s suburbs last week that the region has met four out of six benchmarks for a safe reopening.

Maryland's hospitals had a total of 1,148 covid-19 patients Tuesday, continuing a steady decline since mid-May, when about 1,500 were hospitalized. The state's seven-day average of positive coronavirus tests has also been dropping, reaching 10.5% on Tuesday.

The Maryland Health Department is preparing to launch a statewide campaign to educate residents about contact tracing and the role it plays in fighting the spread of the virus.

Local government officials have criticized the Hogan administration's pace of hiring contact tracers, saying their jurisdictions have had to shoulder too much of that burden themselves. Localities collectively hired nearly 800 such workers. Last month, the Maryland Health Department hired 650 workers.

Overall, the state expects to be able to track 1,000 cases of infection per day and reach as many as 10,000 potential contacts per day, officials said.

In Alexandria, the Economic Development Partnership reminded businesses affected by the pandemic that they can apply for city and federal relief funds.

The public-private partnership said Tuesday that it has $4.4 million to distribute to businesses that have lost 25% or more revenue. Applications will be accepted between 8 a.m. Thursday and 5 p.m. Monday, the organization said.

"The need is immediate," said Stephanie Landrum, the partnership's president and chief executive. "Reopening and re-scaling is already happening."