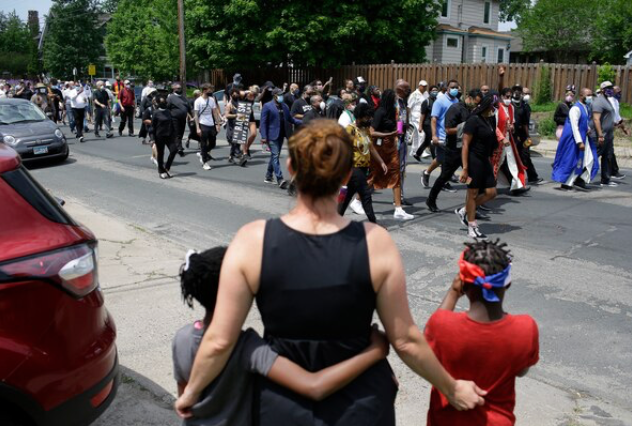 Clergy members march Tuesday in Minneapolis, where George Floyd died in police custody. His hometown, Houston, was host to one of the day's largest peaceful protests. MUST CREDIT: Photo by Joshua Lott for The Washington Post

Large protests against police violence again filled the streets of several U.S. cities on Tuesday, as elected leaders struggled to cope with the damage already done - civilians injured by police, police hurt by civilians and looters who used the protests as cover.

One of the largest peaceful protests on Tuesday was in Houston, hometown of George Floyd - the African American man whose death in Minneapolis police custody ignited an unprecedented national wave of marches and demonstrations. Journalists on the scene estimated there were 25,000 marchers, including Houston Mayor Sylvester Turner, a Democrat, some of Floyd's childhood friends and a group of black cowboys on horseback.

As night began to fall on the East Coast, protests appeared to be peaceful and growing. In Washington, huge crowds remained near the White House, in defiance of a 7 p.m. citywide curfew and a vast law enforcement and military presence. In New York, a group of doctors in white coats led a march through Midtown. There were no reports of significant looting or clashes between protesters and police - but on past evenings, those often occurred much later.

In Atlanta, prosecutors charged six police officers with crimes, after they used stun guns on two unarmed black college students driving on a downtown street. In Richmond, Virginia, the mayor apologized for an incident Monday in which police tear-gassed peaceful protesters. And in Philadelphia, the mayor criticized police officers for posing for photos with a group of white vigilantes carrying baseball bats and shovels.

"The police in New York City were not effective at doing their job last night. Period," said Cuomo, saying he was "outraged." "They have to do a better job."

On Monday night, one New York police officer was beaten by looters, and another was struck by a car and seriously injured. They were among several police officers injured nationwide: An officer in Las Vegas was shot and gravely injured, four officers were wounded by gunfire in St. Louis, and two officers were injured in Buffalo when they were struck by a speeding car.

Las Vegas police said that they had arrested a 20-year-old man in the shooting and that the officer remained in critical condition.

In New York, de Blasio has resisted calling in National Guard troops to help and instead pleaded with community leaders to help stem the chaos.

"Members of the clergy, come out now. I'm calling you out. Civic leaders, block associations, come out now and stand up for peace," de Blasio said.

In an effort to control looting, the city announced that it would limit vehicle traffic south of 96th Street - an area covering much of Manhattan - to residents, essential workers, police and delivery trucks.

Nationwide, more than 60 million people were under curfews as a result of the protests, in 200 cities and 27 states. The measures are intended to separate peaceful protesters from looters and vandals, by requiring that the peaceful protesters demonstrate in daylight and then go home.

At least 17,000 National Guard troops have been activated in response. In Washington - where peaceful protests and looting rampages have both occurred in recent days - downtown streets were full of Army trucks and federal agents on Tuesday.

On Monday night, Army helicopters had flown low over protesters in Washington, blasting them with high wind from the rotors - a dangerous maneuver used to intimidate enemies on overseas battlefields.

It was a moment unlike any in recent American history, as hundreds of cities already beset by the coronavirus pandemic faced a historic wave of protests.

And still, the protests kept growing. In Washington, marchers filled one of the city's major streets, headed toward the now-fortified downtown. In Milwaukee, thousands marched six miles in early summer heat. People knelt on the cobblestone streets of Nantucket, Massachusetts, marched in Morgantown, West Virginia, and crowded around police headquarters in El Paso, Texas.

In many cases, they repeated some of Floyd's last words: "I can't breathe." A Minneapolis police officer knelt on Floyd's neck for more than eight minutes on May 25, not moving an inch when Floyd said he couldn't breathe - or even when Floyd lost consciousness.

The officer, Derek Chauvin, has been charged with third-degree murder. Three officers who were also on the scene have been fired but not charged with crimes.

In Minnesota on Tuesday, Gov. Tim Walz, a Democrat, said the state had opened a civil rights investigation into the Minneapolis Police Department, looking at the past 10 years.

In the past, protests against excessive force have often remained localized to the city where they began, like Ferguson, Missouri, in 2014.

This time is different. One possible reason: Americans are now far more likely to believe that police use excessive force against black people, even compared with a few years ago.

A new study from Monmouth University, released Tuesday, found that 57 percent of Americans today believe police are more likely to use excessive force against black people.

That represents an increase from the 34 percent of registered voters who said the same in 2016 following the police shooting of Alton Sterling in Louisiana, and the 33 percent who said so in 2014 after a grand jury did not indict a New York City police officer in the death of Eric Garner.

President Donald Trump seems intent on ratcheting up the force used by police: He spent Tuesday on Twitter congratulating himself for using the National Guard in Washington and blasting de Blasio for not using it in New York. "Overwhelming force. Domination," Trump wrote in one post.

It's unclear whether that strategy will deter the protesters. During the past 60 years, the U.S. military has learned the limits of "overwhelming force" when it has been applied to win political arguments and civilian hearts overseas. Trump now seems to be applying it to American politics, and American civilians.

On Monday, federal law enforcement officers suddenly used force to clear a crowd of peaceful protesters from an area near the White House - allowing Trump to visit a nearby fire-damaged Episcopal church for a photo op.

The street was cleared. But on Tuesday, it was clear that the use of force had brought a backlash: Trump was denounced by Washington's Episcopal bishop and its Catholic archbishop on the same day.

Archbishop Wilton Gregory criticized a Washington Catholic facility, a shrine to Pope John Paul II, for hosting Trump for a visit Tuesday, the day after the forcible street-clearing.

"Saint Pope John Paul II was an ardent defender of the rights and dignity of human beings. His legacy bears vivid witness to that truth," Gregory said. "He certainly would not condone the use of tear gas and other deterrents to silence, scatter or intimidate them for a photo opportunity in front of a place of worship and peace."

The limits of Trump's strategy were also obvious on the streets of Washington on Tuesday. There were Humvees in the streets. But the protesters kept coming.