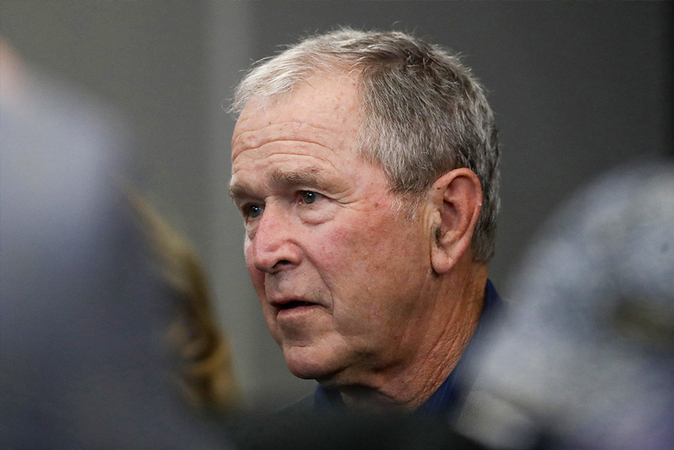 Former president George W. Bush addressed the nationwide protests in a solemn yet hopeful statement Tuesday, commending the Americans demonstrating against racial injustice and criticizing those who try to silence them.

Bush closed his statement, which came a day after peaceful protesters were cleared by force to make way for President Donald Trump to come outside, by pointing to a "better way."

"There is a better way - the way of empathy, and shared commitment, and bold action, and a peace rooted in justice," Bush said in the statement. "I am confident that together, Americans will choose the better way."

Describing himself as "anguished" by the death of George Floyd, a black man who died more than a week ago after his neck was held under the knee of a white Minneapolis police officer, Bush urged white Americans to seek ways to support, listen and understand black Americans who still face "disturbing bigotry and exploitation."

The statement by the nation's 43rd president does not mention Trump, but his call for compassion and unity presents a stark contrast to the current president's more inflammatory rhetoric.

"The only way to see ourselves in a true light is to listen to the voices of so many who are hurting and grieving," Bush said. "Those who set out to silence those voices do not understand the meaning of America - or how it becomes a better place."

"We can only see the reality of America's need by seeing it through the eyes of the threatened, oppressed, and disenfranchised," he added.

Bush also seemed to offer a veiled criticism of the aggressive stance taken by some police against protesters, saying, "It is a strength when protesters, protected by responsible law enforcement, march for a better future."

As president, Bush faced protest and backlash, first against his decision to go to war with Iraq and later for his handling of Hurricane Katrina, which devastated African American communities disproportionately.

He and his family have had a strained relationship with Trump and have rejected his politics, though they have largely avoided directly criticizing him.

Shortly after Bush released his statement, his former chairman of the Joint Chiefs of Staff Mike Mullen, who has also said little critical of the current president, decried Trump's response to the protests, specifically his desire to militarize it and use aggressive force, in an essay published by The Atlantic.

Mullen wrote that he was "sickened" to see security forces deploy hostile measures on protesters outside the White House to clear the way for Trump to venture out for a photo op.

"Whatever Trump's goal in conducting his visit, he laid bare his disdain for the rights of peaceful protest in this country, gave succor to the leaders of other countries who take comfort in our domestic strife, and risked further politicizing the men and women of our armed forces," Mullen said.

Mullen, like Bush, stressed that people needed to understand that the root of these protests is the persistent racism African Americans face."