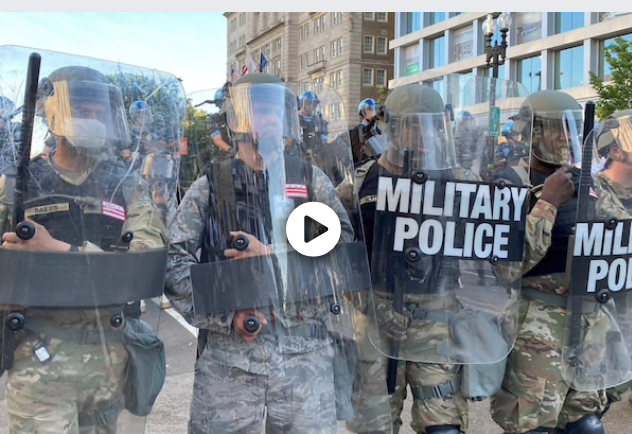 WASHINGTON - Over the past five years, President Donald Trump has suggested that it is OK for police officers to rough up uncooperative suspects and warned that bikers who support him might get "tough" if his political rivals, including antifa, provoke them.

He obliquely implied that gun rights advocates could exact vigilante revenge if Hillary Clinton were elected, and he declared that an American soldier, Bowe Bergdahl, should have been executed for desertion in Afghanistan.

He has joked about wanting to "get rid of" journalists with Russia's Vladimir Putin, whose government has jailed them, and has marveled at the willingness of China and the Philippines to execute drug dealers - even without trials.

The president's long-standing endorsement of the use of force to subdue or eradicate elements of society that are undesirable to him has led critics to label him a budding authoritarian. Supporters have countered that Trump is a strong, law-and-order leader who is willing to exaggerate or even joke about using government-sanctioned violence against Americans to make a rhetorical point about the nation's priorities.

But Trump's threats this week to shoot looters, sic "vicious dogs" on protesters and dispatch the military to U.S. cities amid demonstrations against police brutality have heightened the stakes of the president's words and actions. As protesters and police have clashed in major cities, the president has escalated tensions and, on Monday evening, took a stroll through Lafayette Square for a photo op after authorities used smoke canisters, rubber bullets and metal shields to oust peaceful protesters near the White House.

"Yesterday was tough, watching that stuff happen in our country - the kind of things myself and others worked hard to fight in other countries around the world. It was scary," Fernando Cutz, who served on the National Security Council under both Trump and President Barack Obama, said Tuesday.

Trump aides disputed that the president directly ordered the area cleared of protesters well-before a curfew imposed by the Democratic District of Columbia mayor, and less than an hour before the president and many of his senior advisers, including top military officials, strode across the block for the appearance in front of St. John's Church, which had been partially burned the previous evening. The Justice Department said Attorney General William Barr gave the order after conferring with law enforcement officials.

But the chaotic scenes and Trump's eagerness to escalate his threats - announcing in the Rose Garden that he would dispatch military troops if governors and mayors did not establish an "overwhelming law enforcement presence" to "dominate the streets" - have provoked an outcry from Democrats, civic and religious leaders, and even some Republicans.

"Using rhetoric in that way, to intimidate and threaten, is authoritarian because it prevents debate and discussion," said Jennifer Mercieca, an associate professor of American political rhetoric at Texas A&M University.

She pointed to Trump's conference call with governors Monday in which he mocked them as "weak." Though he professed to support "peaceful protesters," Trump in the Rose Garden called many of the demonstrators - some of whom have looted stores and set fires - "professional anarchists, violent mobs, arsonists, looters, criminals, rioters" conducting "acts of domestic terror."

"They're going to run over you. You're going to look like a bunch of jerks," Trump said on the call, according to a recording obtained by The Washington Post.

Trump's approach, Mercieca said, aims to "deny someone standing in a debate. Instead of interrogating their argument or responding, you threaten and use force and intimidation to change the subject or deny the argument."

The president reportedly decided to make his walk across Lafayette Square in part because he was chafing at reports that he had retreated to a secure bunker under the White House as protesters clashed violently with the Secret Service on Friday.

Trump has promoted himself as a tough guy for decades, dating back to 1989, when he called for the death penalty for five minorities under age 16 who were convicted of a rape in Central Park.

In a full-page ad in New York City newspapers, Trump wrote: "BRING BACK THE DEATH PENALTY. BRING BACK OUR POLICE!" Though their criminal convictions were vacated in 2002 and New York paid a $41 million settlement to the men, Trump has declined to apologize. "They admitted their guilt," he told reporters last year.

Trump fashioned much of his 2016 campaign around his willingness to crack down on crime and illegal immigrants, calling Mexican migrants "rapists." He suggested that his supporters were justified in beating up a black protester during a campaign rally in November 2015, saying he was "so obnoxious and so loud" that "maybe he should have been roughed up." He has encouraged rally chants of "Lock her up," about Clinton, and "Send them back," about four minority Democratic congresswomen who are American citizens.

In White House ceremonies, Trump has promoted the work of Border Patrol and Immigration and Customs Enforcement agents, citing in detail their efforts to deport gang members. After a month in office, he boasted about an ICE raid, inaccurately labeling it a "military operation." He dispatched military troops to assist in border operations in 2018, ahead of the midterm elections.

In July 2017, during an address to law enforcement officials on Long Island, New York, Trump regaled the audience by suggesting they need not worry about roughing up suspects under arrest.

"When you guys put somebody in the car and you're protecting their head, you know, the way you put their hand over?" Trump said, miming the physical motion of an officer shielding a suspect's head to keep it from bumping against the squad car. ". . . I said, you can take the hand away, OK?"

Beyond U.S. borders, Trump has professed admiration for strongman-style tactics from his counterparts, including Philippines President Rodrigo Duterte, whose administration has overseen the extrajudicial killings of thousands of alleged drug dealers. "You're doing an unbelievable job on the drug problem," Trump told him in 2017.

Cutz, the former National Security Council official, recalled the Trump administration's efforts to force Venezuela's authoritarian leader, Nicolás Maduro, from power as hundreds of thousands of protesters took to the streets last year amid an economic meltdown. But as Maduro held on and began using government force to fight them, Cutz said, Trump appeared to waver.

"It got to the point where I remember the president saying: 'You know, Maduro is not as easy to bring down as I thought. Maybe we should reconsider this,' " Cutz said. Although Trump did not call for a change in U.S. policy, Cutz said the president began privately seeming to "show respect for Maduro. All of a sudden he was impressed."

After trips to France and China, where he observed military parades, Trump wanted to put on a show of force of his own. He pressed then-national security adviser H.R. McMaster and then-Defense Secretary Jim Mattis, who both served as generals, to organize a parade in Washington featuring Army tanks, F-35 fighter jets and even Air Force One - only to back off after aides emphasized the cost. (Trump staged a scaled-down version during the Independence Day celebration last summer.)

This week, a more dramatic version has taken place in downtown Washington as military trucks rolled down the streets and Trump was flanked by Joint Chiefs of Staff Chairman Mark Milley, wearing fatigues, during his walk through Lafayette Square.

"That's a huge part of his persona and his rhetoric as president: I'm the big guy to come in and solve everything when others screw up or can't handle it," said Susan Benesch, a faculty associate at Harvard University and founder of the Dangerous Speech Project. "He's trying to portray the governors or mayors as incompetent weaklings who can't handle the problem - and threatening to use the military and walking to the church is part of it. That's him literally posturing try to show himself as tough."