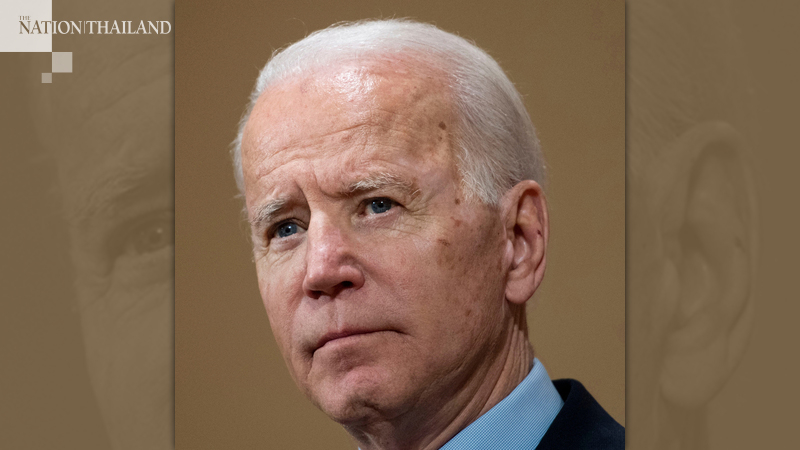 Former vice president Joe Biden promised Tuesday to secure the nation's unmet promises to minority Americans, drawing a sustained contrast with President Donald Trump as he vowed not to "traffic in fear and division" and "fan the flames of hate."

Biden, the presumptive Democratic presidential nominee, sought with the somber pageantry of a flag-draped background and echoes of past American leaders to distinguish himself from the divisive presence of Trump, whose administration Monday night roughed up and pushed back peaceful protesters on a street one block from the White House. Trump then crossed the newly cleared path to pose with a Bible in front of a historic church.

"We can be forgiven for believing that the president is more interested in power than in principle," Biden said. Trump is "more interested in serving the passions of his base than the needs of the people in his care."

"I'll do my job, and I will take responsibility. I won't blame others," Biden said, adding, "I'll seek to heal the racial wounds that have long plagued this country - not use them for political gain."

Biden announced one major new proposal - a ban on police chokeholds - and reiterated many of the plans he had released earlier in the campaign. He also promised to tackle larger themes and lay out more robust policies on systemic racism and the country's pain in the coming weeks.

But much of his approach rested on familiarity and empathy. For days, as the nation has convulsed with protests and occasional violence, Biden has sought to offer voters a distinct choice in November, presenting himself as a candidate who, unlike Trump, is sympathetic to the anger in the streets over the police killing of a Minneapolis man, George Floyd, and generations of other abuses. Floyd died May 25 after one officer drove a knee into his neck and others put pressure on his back as he lay handcuffed on the street, begging for air.

Tuesday's speech marked a potentially pivotal moment for Biden, who has put African American support at the center of his campaign but has struggled at times to move past a record on criminal justice and other issues that puts him at odds with many current civil rights activists. Just less than two weeks ago, he told a largely African American audience on a popular radio show that "you ain't black" if you're considering supporting Trump. He quickly apologized after he was criticized as taking black votes for granted.

Cornell William Brooks, a former president of the NAACP and a professor at the Harvard Kennedy School, said he thought Biden would be judged by "not what he said perfectly, but what he tried to say at all."

"Was it a perfect speech? No. But was it the kind of speech you can hear in the words a president? I don't think you can deny that," Brooks said.

Biden's nationally televised appearance was designed to put him on the same plane with the president he will meet on Election Day in November. While Philadelphia is the headquarters for Biden's campaign, he has not been there for months, having remained in his Wilmington, Delaware, home under restrictions meant to slow the spread of the novel coronavirus. It was the first speech he has given before an audience rather than a solitary camera since March.

For the past three days, however, Biden has emerged and repeatedly made the point with protest-connected appearances that he would be a different president - stylistically and in terms of policy - from Trump.

On Sunday, Biden visited protesters in Wilmington, while Trump issued scattershot messages on social media, including one that read simply: "LAW & ORDER!"

On Monday, Biden listened to critics and mayors during sessions aimed at understanding how to address the unrest spreading across the nation. Trump that day berated governors for not using proper force to quell it.

Also on Monday, Biden took a knee after listening to critics and praying with them in a Wilmington church. Trump relied on force - including flash-bang grenades - to clear peaceful protesters so he could stand in front of a boarded-up St. John's Episcopal Church, across Lafayette Square from the White House, and pose with a Bible. The gesture drew an angry denunciation from the church's leaders. He later mobilized the U.S. military, which flew Blackhawk helicopters over Washington neighborhoods in a show of force.

Implicit in Biden's approach has been the suggestion that while his record may have shortcomings, he has more affinity and empathy for the black community than Trump, who days ago derided protesters as "thugs."

"He did exactly what he needed to do," said Roland Martin, an African American activist and radio host who has been critical of Biden. "The reality is, the contrast is his greatest strength, Biden's empathy and tone. Compare that with the fake John Wayne persona from Trump."

"But he needs to keep this up," Martin said, suggesting that the former vice president should travel to Minneapolis, where a street memorial on the site of Floyd's killing has attracted tens of thousands of visitors.

Biden launched his speech by speaking to the nation's concerns over police brutality, paying homage to Floyd and making a mantra of his final utterances - "I can't breathe."

"George Floyd's last words. But they didn't die with him. They're still being heard. Echoing across this nation," Biden said. "They speak to a nation where too often just the color of your skin puts your life at risk. They speak to a nation where more than 100,000 people have lost their lives to a virus and 40 million have filed for unemployment - but the disproportionate number of those deaths and job losses is concentrated in the black and brown communities."

He noted that Eric Garner, who died six years ago in police custody in New York under similar circumstances, had uttered the same words.

He also criticized the president's recent repeated use of language that evoked scars of the civil rights era. The president tweeted in recent days that looting would be followed by shooting, playing on a saying uttered by a police chief in the 1960s against civil rights protesters. And Trump threatened the use of dogs and force against demonstrators, as was commonplace during that time.

"I truly believe in my heart of hearts, we can overcome," Biden said, one of several times he drew on phrases from the era in solidarity with its cause.

But he also named some of today's leaders, including the Rev. William J. Barber, and called on Congress to act now to reform policing laws - including passage of a bill introduced by Rep. Hakeem Jeffries, D-N.Y.,to outlaw chokeholds.

"It was powerful to hear Joe Biden acknowledge that it's important to now make [the police chokehold] unlawful," Jeffries said in an interview. "The Congressional Black Caucus is leading the legislative effort to develop, in partnership with the nation's leading civil rights groups, a comprehensive legislative response. And Joe Biden's voice in support of that response once it has been developed will be incredibly important."

The former vice president also made it clear that the demonstrations are pushing him to rethink some parts of his agenda.

"Biden probably did just as much, if not more, sympathizing with the protesters and their plight than even Obama did during Ferguson," said Jon Favreau, a former speechwriter for President Barack Obama, referring to the unrest in 2014 following the fatal police shooting of Michael Brown in Ferguson, Missouri. "Because the debate has moved since then. . . . He could have gone out there and just given a rhetorical speech about 'Let's all come together.' But he proposed some pretty serious police reform policies as well."

Until Tuesday, Biden had largely avoided calling for specific new reforms to deal with the repetitive use of force by police departments, most notably against nonwhite communities. His criminal justice reform plan, released last summer, lacks many of the proposals that were part of the 2016 Democratic Party platform, including the training of officers to avoid use of force, required use of body cameras and federal investigations of all police shootings.

Biden's speech repeated some promises, including establishing a police oversight commission and encouraging departments to embrace community policing programs. He said that every police department needs to undergo a comprehensive review of its hiring practices, training programs and de-escalation tactics - and that the federal government should give cities and states "the tools and the resources they need to implement reforms."

"Bad cops should be dealt with severely and swiftly," he said. "We all need to take a hard look at the culture that allows for the senseless tragedies to keep happening. And we need to learn from the cities and the precincts that are getting it right."

Apart from his call for a ban on chokeholds, Biden largely posited that the solution to continuing abuses was not to create a sheaf of new proposals but to enact measures that have long been debated and never pursued.

"It's going to take more than talk. We've had talk before," Biden said, implicitly criticizing his generation of political leaders. He added that changing American responses would be "the work of a generation."

Biden's strongest support has been among older black voters and suburbanites of all races, and those appeared to be his target audience for his speech. But he also needs to build support from younger black voters, a connection that has not always gone smoothly and had some rough spots, again, on Tuesday.

Brooks, the former NAACP president, said Biden struck the wrong note when he predicted that fixing systemic racism will take a generation. "For activists, protesters, and demonstrators in the street, his political realism may sound more like fatalism," Brooks said.

And Biden's closing line - "God bless our troops," which he routinely uses - could come across as off-key at a time when the streets are growing more militarized.

"The troops he's speaking of aren't abroad. They're here, and on the street," Brooks said. "So when you say protect - protect from whom? Rioters and arsonists? Yeah. But we have people in the streets who aren't rioters and looters."