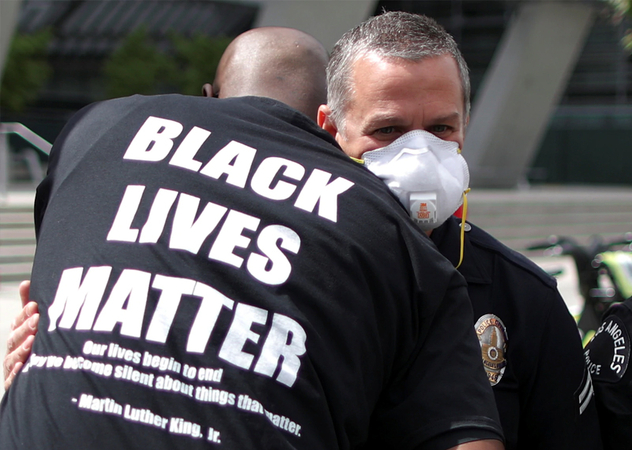 In an effort to address the outcry in Africa over the killing of George Floyd, President Donald Trump's ambassador to Kenya issued a statement on Tuesday claiming that "while no action can bring George Floyd back to his family, the officers involved have been arrested."

The claim, which Ambassador Kyle McCarter delivered in a video address that was transcribed and echoed on the U.S. Embassy's Twitter account, is not true. While the four police officers involved in the incident were fired, only one, Derek Chauvin, has been arrested - a key complaint of protesters who have demonstrated in cities across the globe.

The State Department did not provide comment when asked about the remarks.

In recent days, several U.S. embassies in Africa took the unusual step of openly criticizing the killing of Floyd in response to a wave of condemnations by African governments and everyday citizens on social media.

But McCarter's statement is the only one that mistakes a fundamental aspect of the case, a fact analysts said will not go unseen as Africans question Washington's visible promotion of human rights on the continent amid a persistent inability to ensure the safety of black Americans at home.

"This feeds fuel to the fire," said Laura Seay, a scholar of Africa's Great Lakes Region at Colby College. "Providing misinformation to Kenyans, whether intentional or not, is harmful to the United States' interests in East Africa and further undermines the efforts of diplomats there to build support for the United States."

Floyd, a black man who was handcuffed on the street in Minneapolis, died after Chauvin pushed his knee onto his neck for several minutes even after he gasped for air and then stopped moving.

The head of the African Union Commission, Moussa Faki Mahamat, has sharply criticized the "murder" of Floyd, saying on Friday that the organization condemns the "continuing discriminatory practices against black citizens of the USA."

McCarter, a political appointee and former Illinois state senator, made the remarks in a video that also called for "justice and accountability for those responsible."

His claim about the arrests was reiterated on the U.S. Embassy Nairobi Twitter account. It has not been corrected, though when The Washington Post inquired about the tweet, it was late at night in Nairobi.

"I'm surprised the embassy hasn't yet issued a correction," said Seay. "The State Department and the Foreign Service have long placed a premium on ensuring that their messaging - including from politically appointed ambassadors like Kyle McCarter - is precisely worded and accurate. I don't know if Ambassador McCarter misspoke or is misinformed in this case, but it's unfortunate either way."

Unlike some political appointees, McCarter does have experience in Kenya where he and his wife founded a charity aimed at helping abused and orphaned children.

He has faced criticisms for his tweets in the past, including a missive referring to former secretary of state Hillary Clinton that read: "Hillary for prison. No really."

During his confirmation hearing last year, Sen. Chris Murphy, D-Conn., warned about the risks of the digital platform.

"[It's] probably worthwhile for anybody taking a diplomatic post to just stand down on Twitter," Murphy said. "These are not helpful comments to someone who is being asked to represent the United States abroad."