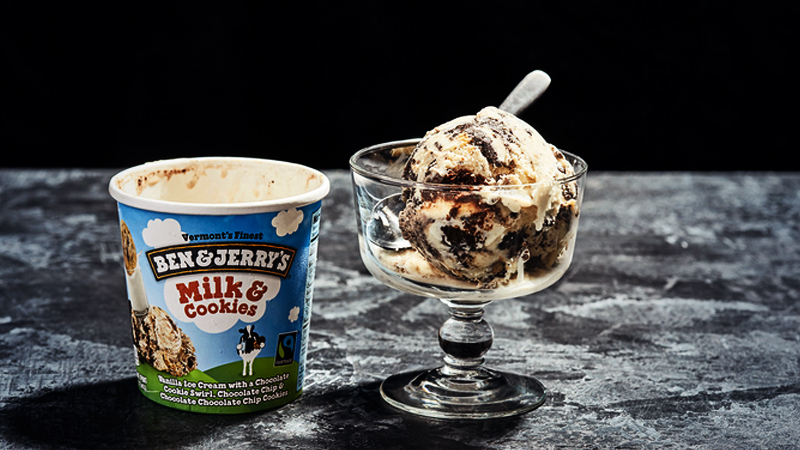 Ben & Jerry's, which posted a lengthy and pointed message on its website blaming Floyd's murder on "inhumane police brutality that is perpetuated by a culture of white supremacy." MUST CREDIT: Photo by Stacy Zarin Goldberg for The Washington Post.

Corporate America's response to the protests over racial injustice and the killing of George Floyd has been about what you would expect: lots of black squares on Instagram, statements by CEOs decrying racism, some silence. Nike posted a video with a twist on its slogan: "For once, don't do it," the company urged, the "it" being choosing complacency or not "being part of the change."

Standing out in this vanilla-bland crowd is ice cream company Ben & Jerry's, which posted a lengthy and pointed message on its website blaming Floyd's murder on "inhumane police brutality that is perpetuated by a culture of white supremacy." The company called for white America to "acknowledge its privilege" and for the need for action to "dismantle white supremacy."

The frozen-dessert company's missive also distinguished itself with its specificity: the message expressed support for concrete policy steps, including the passage of Democratic-sponsored legislation creating a commission to study the effects of slavery and discrimination and to consider reparation proposals; and the establishment of a task force supported by Floyd's family's to draft "bipartisan legislation aimed at ending racial violence and increasing police accountability." It also suggested the Department of Justice "reinvigorate" its civil rights division and for the restoration of consent decrees rolled back by the administration of President Donald Trump curbing police abuses.

The company also took aim at Trump and his response to the protests. "Instead of calling for the use of aggressive tactics on protesters, the President must take the first step by disavowing white supremacists and nationalist groups that overtly support him, and by not using his Twitter feed to promote and normalize their ideas and agendas," the statement read.

Support for protest movements and progressive causes is in the Vermont-based company's DNA. The company supported the Black Lives Matter movement in 2016, decrying in a message "the systemic racism built into the fabric of our institutions at every level." Founders Ben Cohen and Jerry Greenfield were arrested at a Democracy Awakening protest at the Capitol in 2016 and served ice cream to Occupy D.C. protesters in 2011.

And their opposition to Trump is long-standing. As they wrote in a 2017 open letter then President-elect Trump: "We stand with women, people of color, Muslims, migrants, refugees, the LGBTQ community, the poor, and others whose lives may be further compromised by the policies and rhetoric you espoused during your campaign."

They have created whimsically named ice-cream flavors to support various causes, including "Save Our Swirled," in 2015 in support of the climate talks in Paris, "I Dough, I Dough" that same year for same-sex marriage, and "Yes Pecan," a riff on the campaign slogan of former president Barack Obama, in 2009.

The company's political and social agenda wasn't muted when multinational giant Unilever acquired it in 2010. CEO Jostein Solheim explained how it has maintained its crunchy ethos and left-leaning mission in a 2016 interview, in which he said Unilever appoints just two of the 11 seats on the company's board.

And as Ben & Jerry's most recent call to action this week has gotten attention, so have some companies' far more tepid reactions to the current climate.

Rep. Alexandria Ocasio-Cortez, D-N.Y., on Wednesday tweeted her dismay. "I see a lot of corporations releasing bland statements w a hashtag," she wrote. "No. This moment calls for transformation. Your statement should include your org's INTERNAL commitments to change, particularly if you've been called on it before. Give people change."