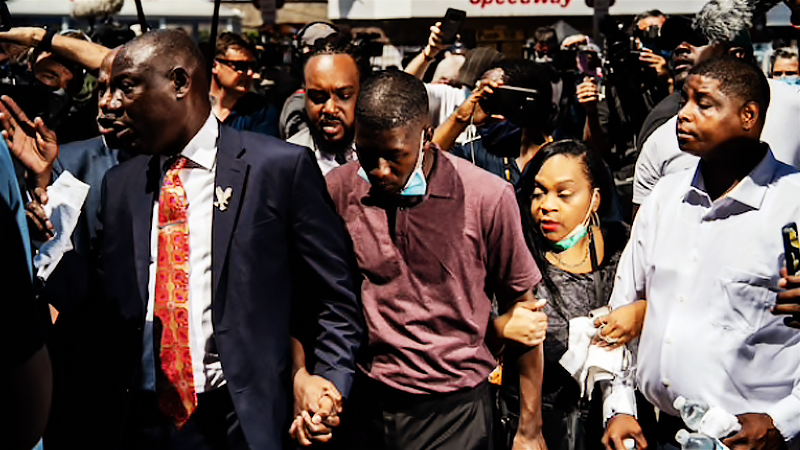 George Floyd's son, Quincy Mason Floyd, center, holds hands with his family's lawyer, Benjamin Crump, on Wednesday as they visit the site where his father was killed by a Minneapolis police officer. MUST CREDIT: Washington Post photo by Salwan Georges

Prosecutors in Minnesota filed new charges Wednesday against all the four former Minneapolis police officers present when George Floyd died in custody, as protesters returned to the streets of American cities but a calmer tone prevailed early on.

The charge against Derek Chauvin - the officer who knelt on Floyd's neck until he lost consciousness - was upgraded to second-degree murder from third-degree, Minnesota Attorney General Keith Ellison, a Democrat, announced. The other three officers, who restrained Floyd or stood guard while passersby pleaded for Chauvin to stop, were charged with aiding and abetting the murder. 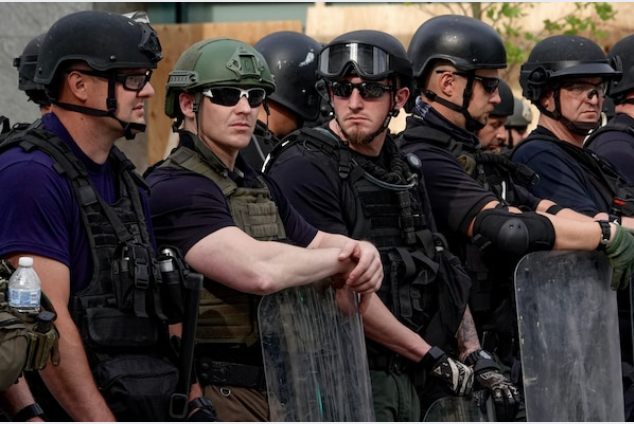 "I strongly believe that these developments are in the interest of justice for Mr. Floyd, his family, our community and our state," Ellison said.

Those charges - which an attorney for Floyd's family called "a source of peace" - came on a day when peace seemed to be making a comeback, at least tentatively. After a week of aggressive use of force by police amid looting and vandalism in some cities, the tone changed, at least earlier in the day. Police in many cities hung back and even marched with demonstrators, while protesters expelled vandals themselves.

But if the cycle of protester anger and police reaction simmered down somewhat, the District of Columbia was an exception.

Federal officials sent a small army of National Guardsmen and federal law enforcement officers into downtown streets on Wednesday. The security perimeter around the White House was expanded to include the area where protesters had been forcibly removed on Monday to clear the way for President Donald Trump to visit a fire-damaged church.

The church, and the street, were now off-limits. Federal prison guards stood watch near the White House, looking over their riot shields at hot, quiet, mostly empty streets. A crowd gathered near Trump's District hotel instead, mounting a peaceful demonstration.

Still, Defense Secretary Mark Esper said Wednesday he did not support the use of the Insurrection Act to respond to the unrest caused by the Floyd's death. That law permits the president to use active-duty troops on American streets to bolster security, something Trump had suggested he might do if necessary.

District Mayor Muriel Bowser, a Democrat, said city officials were not even aware which federal agencies had sent officers to Washington.

"They are under their control, not ours," Bowser said.

It also emerged that last week, Trump was rushed into a bunker at the White House after protesters had hopped over a temporary fence near the residence, according to people familiar with the incident. That new account contradicted Trump's public claims that he was only visiting the bunker "for an inspection" at the time, rather than going there in response to an immediate threat.

When the protests first erupted last week, they were focused sharply on police brutality. But since then, Trump's reaction - calling for more aggressiveness and "domination" against the protesters, describing some as "thugs," using force on peaceful protesters to clear his own path to the photo op - has made him a target of criticism at home and abroad.

On Wednesday, former Defense Secretary Jim Mattis issued a statement condemning Trump, saying he "does not even pretend to try" to unite Americans in a time of crisis.

"I swore an oath to support and defend the Constitution," Mattis wrote, in his first major statement about the president since resigning as Trump's defense secretary in late 2018. "Never did I dream that troops taking that same oath would be ordered under any circumstance to violate the constitutional rights of their fellow citizens - much less to provide a bizarre photo op for the elected commander-in-chief, with military leadership standing alongside."

Trump's presumptive rival in the 2020 presidential campaign, Democrat Joe Biden, released a one-minute campaign ad that included video of Trump from that photo op, as well as clips from an impassioned speech Biden delivered on the protests on Tuesday.

"I won't traffic in fear and division," Biden says in a voice-over for the ad. "I won't fan the flames of hate."

Trump made no public appearances Wednesday. Instead, he took to Twitter to tout his efforts to help African Americans during his presidency and to issue a terse call for "LAW & ORDER!"

In at least two cities on Wednesday, the protests triggered changes that promised to alter the very landscape of the urban areas - and, by extension, the cities' view of their own history.

In Philadelphia, a crane removed a prominent statue of former mayor Frank Rizzo, a tough-on-crime politician whose tenure brought complaints of police brutality. In Richmond, Virginia Gov. Ralph Northam, a Democrat, said he is planning to remove a statue of Confederate General Robert E. Lee from its place on the city's Monument Avenue, a once-unthinkable change in the Confederacy's old capital.

Both statues had been targeted by protesters and tagged with graffiti. In recent days, the city of Alexandria, Virginia, had removed a statue of a Confederate soldier, and Birmingham, Alabama, removed a five-story-tall Confederate monument.

The removal of Confederate statues and flags across the country began several years ago after a shooting at a South Carolina church. The demonstrations of recent days have renewed and accelerated the process.

In Minneapolis, where Floyd died and the nationwide protests began, one city council member said he was considering a more radical change: abolishing the city's police department and starting over.

"I don't know yet, though several of us on the council are working on finding out, what it would take to disband the MPD and start fresh with a community-oriented, non-violent public safety and outreach capacity," council member Steve Fletcher wrote in a Twitter thread.

That idea remains, for now, just an idea: The council has not even begun to sketch out what would replace the current police department, or how it would be different.

In another sign of how the protests have gripped the nation, former president Barack Obama made his first public remarks on the recent events Wednesday, calling them "as profound as anything that I've seen in my lifetime."

Obama, the nation's first African American president, instituted measures aimed at reforming police departments that engaged in a pattern of racial discrimination. Trump's Justice Department dropped that initiative, arguing it was not a matter for the federal government.

Speaking Wednesday at an event hosted by his nonprofit My Brother's Keeper Alliance, Obama said the protests show a growing awareness of the injustices facing African Americans.

"When sometimes I feel despair, I just see what's happening with young people all across the country . . . and it makes me feel optimistic," he said.

In Washington, Justice Department officials said the massive law enforcement presence has been orchestrated by Attorney General William Barr, who wanted to "flood the zone" after incidents of vandalism in the early days of the protests.

But the officers have kept coming even after protests became more peaceful, and changes made Wednesday brought the officers and the protesters much closer together. On Tuesday, the crowds and the officers were separated by a fence and an expanse of open space; by Wednesday, the officers came out from behind the fence and stood in the street with riot gear.

Experts on crowd control have said that violates long-held ideas about how to handle crowds, which teach that the first goal should be de-escalation and that heavy-handed policing often backfires.

"The heavy hand is a smack in the face, and the danger is that it may make things worse," said Dennis Kenney, a professor at John Jay College in New York with expertise in police response to protests. "It really does communicate something about where those who are in charge think our society sits right now. We're in the process of demonstrating to the people who are out in the streets that they are right to be there."