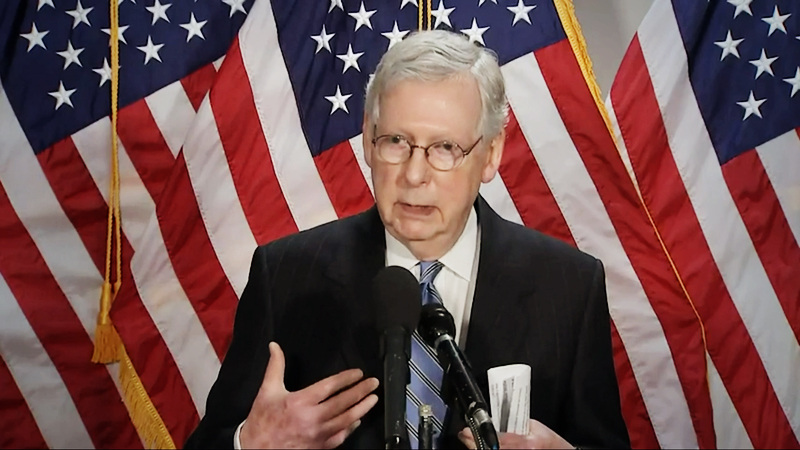 WASHINGTON - Key Senate Republicans have openly embraced the need to rein in police brutality in a manner that was largely unthinkable five years ago, when the political imperative of supporting officers remained central to the GOP's "law-and-order" ethos.

The nearly nine-minute video of a police officer's knee compressing George Floyd's neck left these Republicans stunned, like most of America, concluding that black communities were right in charging some police forces with decades of systemic injustice.

No, these Republicans are not denouncing President Donald Trump's actions, not even his declaration of being the "law-and-order" president before clearing out largely peaceful protesters so he could walk to a historic church near the White House.

Trump's hold on conservative voters remains too strong for any real rebellion from Republicans on Capitol Hill.

But Floyd's death has prompted Republicans to hold uncomfortable conversations and talk more openly, sometimes awkwardly, about a subject they had long avoided. Yet many GOP lawmakers remain unsure of what steps the federal government should take to break this systemic problem.

On Tuesday, Graham spoke to reporters about his discussions with black pastors in South Carolina who talked about how they teach younger African Americans to act if they get pulled over by the police.

"Don't reach into the glove compartment to get your ID. Keep hands on," Graham said, his voice trailing off. "That doesn't happen in my church. So there's a problem here and we've got to get to the bottom of it."

Sen. Roy Blunt, R-Mo., a lieutenant in the leadership team, has had similar conversations.

"You know, with my sons, the discussion has always been if you get in trouble, find a policeman and they'll solve this problem," Blunt said Tuesday.

His African American friends tell their sons to remain calm and call their parents at first chance, Blunt said. "That's a different kind of America, and I think people are understanding that those protests make sense."

Sen. Todd Young, R-Ind., went a step further and called the Minneapolis case murder, even as prosecutors have charged one former officer with second-degree murder and charged three other former officers with aiding and abetting murder.

"We had a senseless murder of a fellow American, George Floyd, in recent days, and it led to understandably anger and grief among so many Americans, great pain. And I think we all feel it," Young, chairman of the National Republican Senatorial Committee, told reporters.

It remains to be seen whether these comments produce action or echo like the "thoughts and prayers" statements that many conservatives issue after mass shootings, without any substantive legislation passing to prevent gun violence.

Trump, for one, does not sound like a president who wants to sign new legislation, and Republicans emerged from their daily policy luncheon Wednesday saying there were no discussions about next steps on the issue.

But it is a marked shift in tone for Republicans.

Back in 2014, after Michael Brown died in Ferguson, Mo., and Eric Garner died while in a chokehold by New York police, Republicans expressed some level of sadness, but nothing like some of their current rhetoric.

John Boehner, R-Ohio, then the House speaker, called them "serious tragedies" that Americans "want to understand more of what the facts were."

By the spring of 2015, as the GOP presidential contest unfolded, few contenders spoke out after Freddie Gray died after riding in the back of a Baltimore police van, and in July 2016, Trump called it "disgraceful" that local prosecutors tried to charge those officers.

By January 2017, House Republicans pulled down a painting depicting the situation in Ferguson that had been selected to hang in a Capitol hallway from a student art competition.

And, to be sure, some Republicans continue to embrace a get-tough approach to any disturbances on city streets, applauding Trump's tone Monday.

"The president talking that way will put a little spine in some of these governors that aren't calling out the National Guard," Sen. Ron Johnson, R-Wis., said Tuesday.

Sen. Tom Cotton. R-Ark., has led the call for Trump to use the Insurrection Act to send active-duty military to work with local authorities to contain any violence, an idea that Defense Secretary Mark Esper said Wednesday that he does not support.

And many Senate Republicans have also expressed opposition to such a rare step. They range from Graham, who said it would only be a "last resort," to freshman Sen. Mike Braun, R-Ind., who said there is no need at this point.

Those Republicans who want to do something - actual legislation to take on police brutality - are struggling with what to support.

"We had some, some discussions. We have some members who have some ideas. So we're, you know, hearing them, hearing those out," Sen. John Thune of South Dakota, the majority whip, told reporters Wednesday.

Thune cited the December 2018 law that revamped the criminal justice system, eliminating some mandatory sentencing guidelines, for how it won support from conservatives and liberals.

Graham is holding a June 16 hearing on police issues, but he has no idea if legislation can emerge that would win enough Republican support and secure Trump's signature.

"Wait and see what happens at the hearing. I don't have anything in mind right now. But hopefully as part of the hearing we can find some things to do together," he said.

Four Senate Republicans renewed their call to push legislation that requires states to keep track of data related to police shootings, including the race of the person shot. Sen. Tim Scott of South Carolina the chamber's only black Republican, first introduced the bill in 2015 after an unarmed black man was shot in the back and killed by police in South Carolina.

Blunt said he would encourage Attorney General William Barr to reinstate the Justice Department's "pattern and practice" program to thoroughly investigate an entire police force's historic behavior, rather that just probing an individual officer or officers after one incident of alleged brutality.

That program, originally housed in the civil rights division, began in 1994 and conducted reviews of departments such as those in Ferguson and Chicago, but under Trump, it was severely limited.

Blunt formalized the proposal in a letter to Barr on Wednesday.

"Looking at individuals is important, but it's not enough. Looking at the pattern and practice of an entire department does matter," Blunt said.