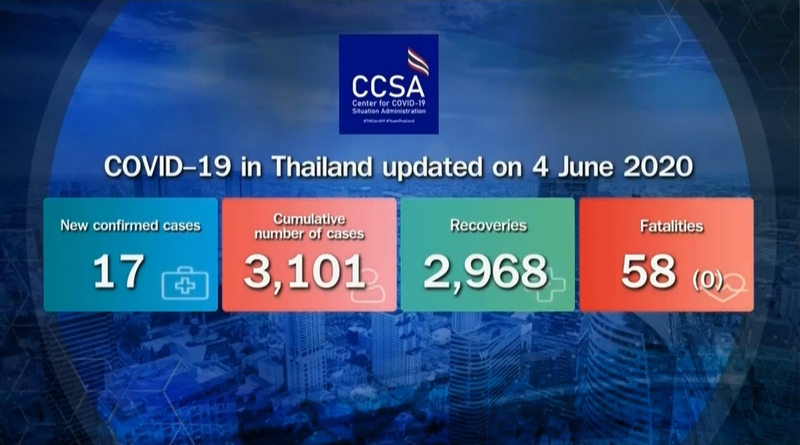 There were 17 new cases over a 24-hour period, Dr Taweesin Visanuyothin, spokesman of the government’s Centre for Covid-19 Situation Administration, said on Thursday (June 4).

Of the 17 new cases, 13 had returned from Kuwait. They comprise 12 men aged 31-56 and a 44-year-old woman. All of them were in state quarantine -- five in Bangkok and eight in Samut Prakan province. Their infection was confirmed by the second test on June 2, though only one of them had shown symptoms.

Two other patients, a male and a female, had returned from Qatar on May 22. The male aged 24 was asymptomatic while the woman, 29, had high fever. Both were in state quarantine in Samut Prakan and tested positive in the second test on June 2.

The other two cases were males aged 28 and 29 who had returned from Saudi Arabia on May 21 and May 25. Both were asymptomatic and found to be infected in the second test on June 1.

As of June 4, the total number of confirmed cases in the country rose to 3,101 -- 75 are under treatment, 2,968 have recovered and been discharged, and there have been 58 deaths.

Globally, the total number of cases is around 6.4 million with around 380,000 deaths