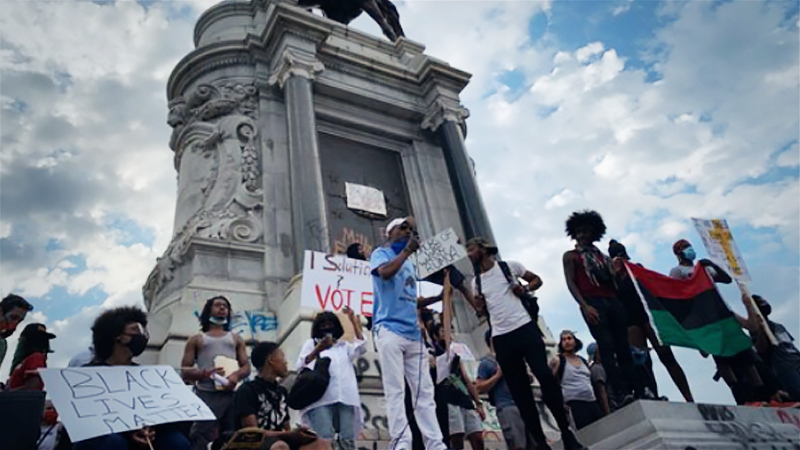 Demonstrators protest Wednesday in front of the statue of Confederate Gen. Robert E. Lee on Monument Avenue in Richmond, Va. Unveiled in 1890, it had become for many a symbol of racism. MUST CREDIT: Washington Post photo by Laura Vozzella

RICHMOND, Va. - Virginia Gov. Ralph Northam, a Democrat, plans to announce Thursday that he will remove the towering statue of Confederate Gen. Robert E. Lee from its site on Monument Avenue and put it into storage, according to an official in his administration.

Word of the pending announcement set off jubilant roars among thousands gathered at the foot of the edifice Wednesday evening for a sixth straight day of marches protesting police brutality against African Americans. The stone base of the monument has been festooned with colorful graffiti calling for racial justice, with numerous expletives directed at police.

The 14-foot statue atop a nearly 50-foot base has been the emotional core of Richmond since it was unveiled in 1890, first as an icon of the Lost Cause of the Confederacy, then as the anchor of the city's grandest residential district and finally as a passionately debated symbol of racial division.

Lee is the only one of the five Confederate figures along Monument that is owned by the state. Northam has supported removal since the deadly Unite the Right white-supremacist rally in Charlottesville in 2017, but he had long deferred to local sentiment. Previous state law also made it unclear whether the governor had authority to remove a war memorial.

This year's General Assembly passed, and Northam signed, a law that allows localities to decide whether to take down monuments on city property. Northam appears to have authority to act as well under the new law.

Virginia has more Confederate memorials than any other state. In Richmond, a black-majority city that served as the capital of the Confederacy, city government has long debated what to do about those public symbols of a painful past.

The Richmond City Council has fallen just shy of enough votes to seek removal of the four other Confederate statues on Monument Avenue that are on municipal property. But its mayor - Levar Stoney, who is African American - said Wednesday that he will introduce an ordinance on July 1 to take down the remaining monuments.

"Removing these statues will allow the healing process to begin for so many Black Richmonders and Virginians," Stoney said in a news release. "Richmond is no longer the Capital of the Confederacy - it is filled with diversity and love for all - and we need to demonstrate that."

Later, Shelton used his bullhorn to exhort the crowd to use upcoming elections to make sure the issue passes. "We only need two more votes to get rid of all these statues," he said. Then he led the group in a call-and-response chant: "What are we gonna do?" "Vote!"

Northam intends to have the Lee statue removed from its base and stored until its fate can be decided, with public input, according to the administration official, who spoke on the condition of anonymity because the plan has not been announced. Northam will address the subject Thursday morning, as initially reported by the Associated Press.

When news was posted on the Facebook page of the Virginia Flaggers - a Confederate heritage group that regularly marches with battle flags on nearby Arthur Ashe Boulevard - comments ranged from anguished to disbelieving.

"My god something has to give this is getting ridiculous," read one.

"If such an ATROCITY were allowed to occur it would be as Dark a Day as the day Richmond fell to the Invading Yankees!" said another.

Republican lawmakers who opposed the removal charged that the announcement was intended to distract from the way Northam and Stoney have managed the sometimes-violent demonstrations. Northam made no public appearances regarding the topic until Tuesday, the same day Stoney spent apologizing for police using tear gas on peaceful protesters.

"It's not surprising that the Governor and Mayor Stoney would take this route," Virginia House Minority Leader Todd Gilbert, R-Shenandoah, said in an emailed statement. "The leadership failure from City Hall to the Executive Mansion has been complete, so naturally, they're thrilled to change the subject."

But community leaders who have pushed for a tougher reckoning with the state's complicated heritage were ecstatic.

"This is huge!!! I'm speechless," tweeted Christy Coleman, who transformed the city's American Civil War Museum into a multicultural look at the conflict before becoming head of the Jamestown-Yorktown Foundation earlier this year.

Coleman, who is African American, co-chaired a commission appointed by Stoney to study the monuments issue after the Charlottesville rally. Their recommendation was to remove the statue of Jefferson Davis, president of the Confederacy, and put more context around the others, explaining not only the legacy of slavery but also the Jim Crow-era oppression that went hand-in-hand with erecting many of the monuments.

In the past few years, Richmond has put up numerous memorials honoring minorities and women, including statues outside the Executive Mansion commemorating schoolgirl Barbara Johns and the lawyers who helped her overturn school segregation and on busy Broad Street honoring Maggie Walker, the first black woman to charter a bank in the United States.

Late last year the debate took an artistic turn when the Virginia Museum of Fine Arts drew thousands for the unveiling of an outdoor sculpture by artist Kehinde Wiley. Called "Rumors of War," the figure is modeled after the statue of Confederate Gen. J.E.B. Stuart on Monument Avenue, but it depicts a modern, urban black man in a heroic pose atop a horse.

The statue was hailed nationally as casting the debate over symbols in a whole new context.

During the unrest this past weekend over police killings of unarmed African Americans, touched off by the death in Minneapolis of George Floyd under the knee of a police officer, the Wiley statue was left untouched.

Next door, though, the marble-clad headquarters of the United Daughters of the Confederacy - which oversaw the construction of most of the Confederate monuments - was partially burned. Artifacts were destroyed in the fire, including a camp flag that had been flown by Stonewall Jackson.

On Wednesday, as speeches and marching continued into the night, some protesters cautioned against putting too much faith in the removal of a statue.

"We are not here to bring a monument down," said a man who identified himself only as Q, 23, a graduate of Virginia Commonwealth University. "We are here to bring a system down."

Earlier, one speaker addressing the crowd at Lee's feet was a white man who spoke nervously, admitting that he had never considered himself a racist but had never thought much about racial injustice. His eyes were opened, he said, by recent protests.

"I'm like Windows 98, and I'm about 12 upgrades behind," said Ty Fogg, 56, a stay-at-home father of three. He said he was a lifelong Richmonder who used to toss Frisbees through the legs of the monuments' bronze horses; in high school, he told the crowd, his best friend was black, yet he gave no thought to the school mascot, a rebel soldier, and sang the school song, "Dixie."

Fogg's comments were greeted warmly. Despite anger over the racial injustice highlighted by the Black Lives Matter movement, Richmond's demonstrations have taken on an increasing tone of racial healing and community action.

Many protesters, as well as the city police, blame outsiders for the destruction that marked late-night demonstrations over the weekend. Some of the hardest-hit shops were in the historic black business district of Jackson Ward.

"To the organization that wants to come in and destroy our city, I rebuke you in the name of Jesus," Pastor Karen Fountain, 61, of Zion Under God's Holiness International Ministry, prayed Wednesday on the steps of St. Paul's Church. "And we send you back from where you came!"

In keeping with the communal tone, as marchers set out from the Lee statue for the Capitol, a cry went up: "Pick up your trash!"

At the gates of the state Capitol, Justice Peebles, 23, urged the crowd to sit in the shade and drink water to recover from the 90-degree heat. The crowd had swelled so that it filled a full block of Ninth Street.

Peebles, who runs an education nonprofit, said the marches would continue for 381 days, the length of the bus boycott led by the Rev. Martin Luther King Jr. "381! 381!" Peebles called. "We're here and we're here to stay!"