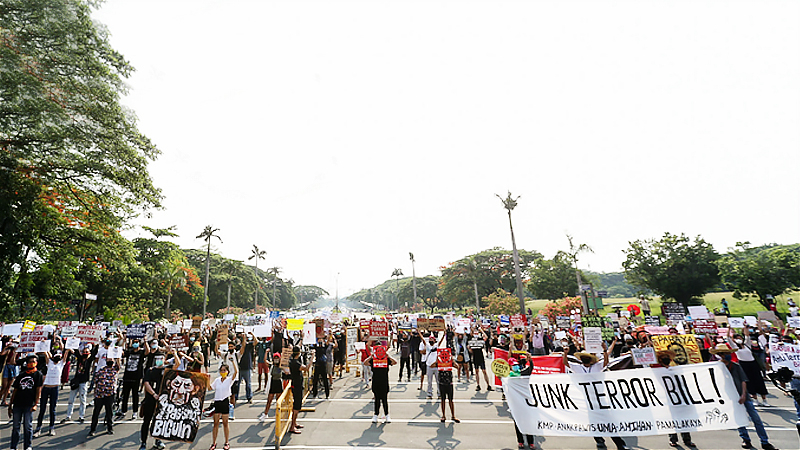 ‘DRACONIAN’ Hundreds of protesters from militant groups, wearing protective masks and shields and defying quarantine restrictions, gather on University Avenue of the University of the Philippines campus in Diliman, Quezon City, on Thursday to rail against the approval of the antiterror bill in the House of Representatives. The measure allows warrantless arrests, detention for 14 days without charges and wiretapping in pursuit of the government’s war on terror. —LYN RILLON

For the first time since the nearly three-month ban on mass gatherings was imposed, hundreds of human rights and political activists held a protest march on Thursday, this time against the proposed antiterrorism law, warning that it would be used by President Rodrigo Duterte to suppress critics in the guise of fighting terrorists.

Wearing masks and face shields and practicing physical distancing, the protesters carried banners and placards as they marched on the University of the Philippines campus urging lawmakers to “junk the terror bill” and “stop state terrorism.”

“We call it the terror bill because it will bring terror on the exercise of our rights and freedoms,” said ACT Rep. France Castro, who voted against House Bill No. 6875, which was passed on third reading on Wednesday.

The Makabayan bloc in the House of Representatives said the measure “will give President Duterte and his junta of former military and police generals unprecedented powers to suppress dissent, silence critics and activists, and curtail the fundamental rights and freedoms of all citizens, on the pretext of fighting terrorism.”

Presidential spokesperson Harry Roque said that even if Mr. Duterte certified the bill as urgent, “it doesn’t mean that the President will automatically sign it.”

“It will still undergo a final review to check for any provisions that may be against the 1987 Constitution, before the President signs it,” Roque said on Thursday.

Makabayan will take all legal moves, including filing a petition in the Supreme Court, to question its constitutionality, said Deputy Minority Leader and Bayan Muna Rep. Carlos Isagani Zarate.

Zarate rejected pronouncements by the bill’s authors that ordinary citizens have nothing to fear from the propposal.

“Can we still trust this government? When just in the last three months, it has used the police and the military and arrested around 30,000 alleged quarantine violators behind the Bayanihan to Heal As One law?” he said.

Two members of the House majority bloc who were previously listed as coauthors—Magsasaka Rep. Argel Joseph Cabatbat and Muntinlupa Rep. Ruffy Biazon—said they voted “no” to the bill.

Biazon said that while he agreed that the country needed an antiterrorism law, the House “as a matter of principle,” should come up with its own version and not just be made to adopt the Senate bill.

“I believe that we should stand up for the House and because of this, my vote is no to the bill, and my name could not be attached to a bill that is not my real work,” Biazon said in explaining his vote.

In a statement, Cabatbat said his proposals to include “clear and strong safeguards to protect farmers and other vulnerable sectors,” had been rejected.

He said his Magsasaka party list had been tagged by the military as a terrorist organization, because farmers were often “stereotyped as rebels, subversives, terrorists and violent people.”

“It appears that to many people, there is no distinction among these labels,” Cabatbat said.

Cagayan de Oro Rep. Rufus Rodriguez, who voted against the bill, said the state should “guard against violent terrorist attacks but should equally uphold the right of freedom of speech, right to peaceably assemble.”

Bukidnon Rep. John Flores abstained, saying the antiterrorism bill “is very prone to abuse and the penalties are too extreme.”

Guiamel Alim, chair of the Consortium of Bangsamoro Civil Society based in Cotabato City, said the authors of the bill “appear to be biased against the Moro people because by mere suspicion alone, you could get arrested.”

”We know that when it comes to terrorism, the Moro people are easily suspected,” he said.

Lawyer Edy Santiago, former human rights lawyer in the defunct Autonomous Region in Muslim Mindanao, said he had assisted people who were unlawfully arrested usually during “ungodly hours” by law enforcers wearing masks and without warrants.

“It was very difficult to help them then. With the passing of this terror bill, helping them now has been made virtually impossible,” Santiago said.

Proponents and supporters of the antiterror bill said the fears were unfounded.

Interior Secretary Eduardo Año, a former military chief of staff, said the proposed law was a “bold and timely upgrade” of the country’s arsenal against terrorism, including the “communist terrorists.”

“The people have nothing to fear from this bill. It is only the terrorists and their supporters who should fear it,” he said.

Sen. Panfilo Lacson, the main sponsor of the bill, said the measure targeted terrorists who could launch attacks anywhere, anytime, even during the COVID-19 pandemic.

He assured the public that the measure borrowed provisions from the antiterrorism laws of “strong democracies,” such as Australia and the United States, and was guided by United Nations standards.

As for the 14-day detention without warrant, he said this was shorter than what was set in laws of neighboring countries—from 30 days in Thailand to 720 days in Singapore, which could be extended to an indefinite period without formal charges.

“To the critics, I dare say: I hope the day will not come when you or any of your loved ones will be at the receiving end of a terrorist attack, so much so that it will be too late for you to regret convincing the Filipino people to junk this landmark legislation,” he added.

Reacting to Lacson’s statement, Edre Olalia, president of the National Union of Peoples’ Lawyers, said: “We do not wish the same evil visit the senator or any human being for that matter.”

But Lacson’s statement was “fallacious,” he added.

“Opposing a wrong thing does not mean opposing a right thing,” Olalia said. “Opposing what we view from experience, logic, law and basic civil liberties of the multitude who are innocent and not terrorists as dangerous and unacceptable does not mean we welcome such wicked acts of the very few real terrorists and fascists anywhere.”

Detained Sen. Leila de Lima said she would have voted against the bill, whose “obvious” targets were critics of the administration.

“Given our law enforcement’s exemplary record in human rights violations, this is not impossible. No safeguards for the protection of human rights. No redress of legitimate grievances,” she said, adding that the bill was “lawfare at its subtlest yet vile form.”

Church leaders belonging to the Archdiocese of Manila, National Council of Churches in the Philippines, Iglesia Filipina Independiente, United Churches of Christ in the Philippines, Ecumenical Bishops Forum, and Promotion of Church People’s Response, among other groups, issued a unified statement against the bill.

“With the antiterrorism bill speeding toward becoming a law, we, church leaders must speak out and vehemently oppose its passage,” they said.

The bill will “likely be misused and abused by those who wish to ‘lord it over’ the Filipino people, obliterate opposition, and quell even the most legitimate dissent,” they said.

“We are speaking, even as we recognize that to do so is dangerous. For such a time as this, to remain silent only assures the impending destruction and abuse of our people,” the church leaders said. —WITH REPORTS FROM LEILA B. SALAVERRIA, MARIEJO S. RAMOS, MELVIN GASCON, TINA G. SANTOS, JULIE M. AURELIO, JULIE ALIPALA, JIGGER J. JERUSALEM AND LEAH AGONOY