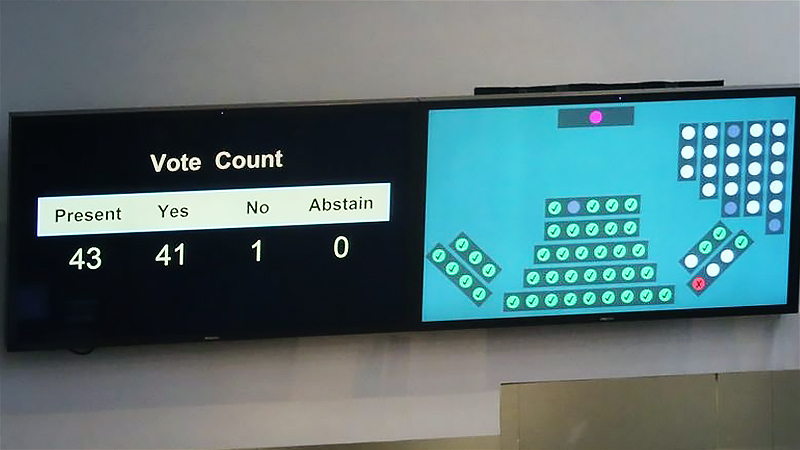 A screen shows the voting result for the National Anthem Bill with 41 in favor and one against in the Legislative Council chamber, Hong Kong, June 4, 2020. (PARKER ZHENG/CHINA DAILY)

HONG KONG - Hong Kong's Legislative Council passed the National Anthem Bill with 41 lawmakers in favor and one against on Thursday.

The third reading debate that began in the morning was once suspended as opposition lawmakers disrupted the meeting by throwing a foul-smelling liquid in the chamber.

Acting LegCo chairwoman Starry Lee Wai-king had lawmakers Eddie Chu Hoi-dick and Ray Chan removed from the chamber for the stunt. Police and firefighters were called into the chamber for investigation.

The law would make disrespecting the Chinese national anthem a criminal offense.

Meeting the press after the passage, Secretary for Constitutional and Mainland Affairs Tsang Kwok-wai said the law will come into effect on June 12 when the government gazettes it. The government will strengthen its education and promotion of the law to enhance the public's sense of national identity in Hong Kong.

Tsang called on the public to show more respect to the national anthem, which is a symbol of the country. He pointed out the law will not affect the general public unless they publicly insult the anthem, thus it is unfounded to claim the law will undermine freedom of speech.

The law would punish those who insult the anthem with up to three years in jail and/or fines of up to HK$50,000 (US$6,450). It states that "all individuals and organizations" should respect and dignify the national anthem and play it and sing it on "appropriate occasions". 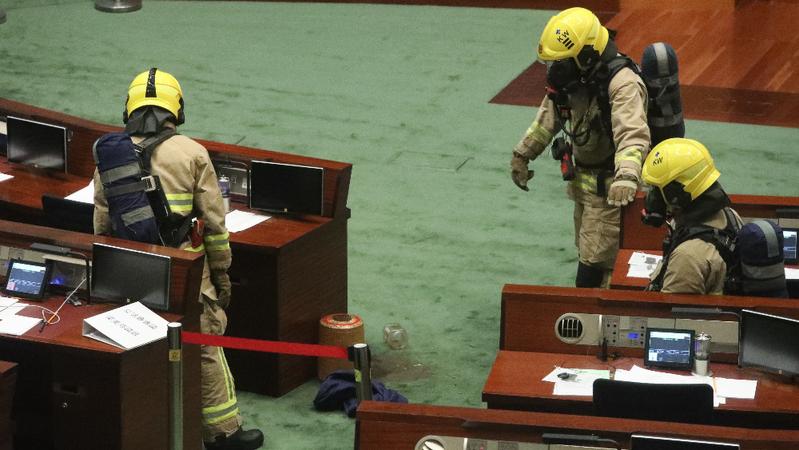 The legislation began in 2018 but was postponed for a long time due to violent incidents and riots last year and the filibuster by opposition lawmakers in the LegCo's House Committee.

China's National Anthem Law came into force in the mainland in 2017 and then the Standing Committee of the 12th National People's Congress adopted the decision to add the law to Annex III to the HKSAR Basic Law.

In accordance with Article 18 of the Basic Law, national laws listed in Annex III to the Basic Law shall be applied locally by way of promulgation or legislation by the HKSAR.