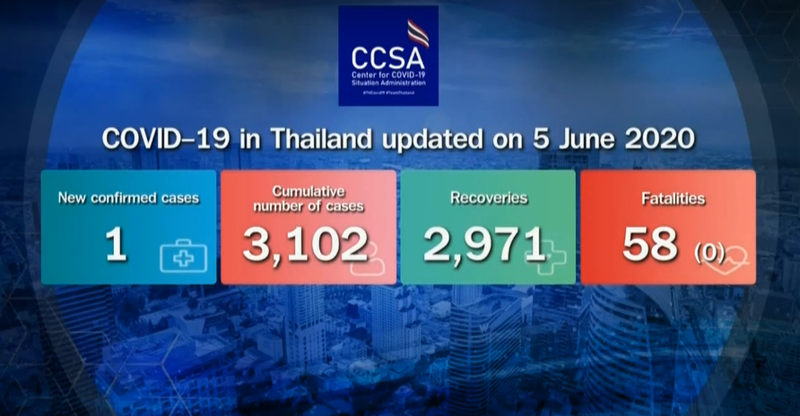 Thailand recorded only one case of Covid-19 over the previous 24 hours, the government’s Centre for Covid-19 Situation Administration (CCSA) reported on Friday (June 5).

The total number of cases since the outbreak began increased to 3,102, of whom 165 were found in state quarantine, according to CCSA spokesman Taweesin Visanuyothin.

Meanwhile, three patients have recovered, taking the total of those who have recovered and returned home to 2,971. The death toll remains at 58.

The spokesman said that visitors to the UK will be urged to quarantine for 14 days in state quarantine facilities, effective next Monday (June 8). Meanwhile, Italy will lift all border restrictions and cancel its mandatory 14-day quarantine measure.

Taweesin explained that while other Thai airports have reopened, Phuket airport remains closed after Covid-19 cases were found in the province in the past 14 days.

He also said a total of 156,982 businesses had registered for the ThaiChana online disease-control platform, while 21.524,238 million people have used the platform.